Holiday Book Shopping for a Teen? Look no further:

I read a ton of YA books this year and in case anyone’s on the lookout for a good read for the 11 to 16 year old girl in your life, here are some of the best:
(note: most of these are not NEW books. I just happened to read them this year.)

In no particular order

1. Feed by M.T. Anderson. This is a must-read for a teen (or anyone) living in our consumeristic/plugged in society—the characters walk around with computers literally attached to their brains. Buy this for the teen boy in your life as well. Alternately hilarious and heartbreaking. And contains one of the best first lines ever: "We went to the moon to have fun, but the moon turned out to completely suck." 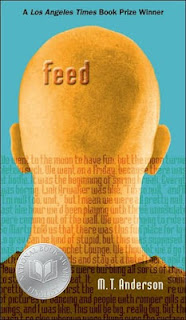 2. Summer I Turned Pretty by Jenny Han. The trend in teen fiction lately seems to be love triangles, as in, teen girl torn between two cute boys. In this book, they’re brothers—the funny, cool friend and the older, brooding guy—who is of course the one the girl longs for. Well-written and funny. There’s also a sequel.

3. Graceling by Kristin Cashore. I’m embarrassed to say why I picked this book up (okay. I’ll tell you. When my book(s) get published, they will be shelved beside Cashore's). Not too shabby placement, because this book is great. It’s fantasy (not usually what I’m drawn to) but so absorbing. Page turner. Great girl character. She’s got the gift of being able to kill people. And there’s a boy. Will she kill him? hmm. Read to find out.

4. Hunger Games by Suzanne Collins. Not too often do you get a well-written page turner. This one’s a post-apocalyptic nightmare. Part Surviver. Part Fahrenheit 451. Two boys and a girl. (again) Strong, resourceful main character figures out how to win a game that’s rigged against her. Everyone in my family read this book. Husband. Teen boy. Teen girl. None of us could put it down. (And there are two sequels that are just as riveting)

5. Catalyst by Laurie Halse Anderson. Main character is a cross country runner, perfect child, daughter of a minister, trying to run the household while obsessing over getting into MIT (where her mother went). Very cool contrast between her ordinary world and the "catalyst" that blows it all apart. Also want to put in a plug for Twisted and Prom by the same author. Anderson knows and understands teens better than pretty much any YA writer around.

6. Life as We Knew It by Susan Beth Pfeffer. Starts with a kind of flaky 16 year old girl and then an asteroid hits the moon and all hell breaks loose. Very interesting how the family copes. This book will seriously make you consider stocking up on canned goods.

7. Forest of Hands and Teeth by Carrie Ryan. The only zombie book on the list. Totally could not put this one down. My heart was pounding as I read it. Also has a love triangle. (told you this was a trend) Just so happens that one of the guys ends up turning into a zombie. Drat.

8. Thirteen Plus One by Lauren Myracle. This is the fourth book in a great middle grade series. Other books are Eleven, Twelve, and Thirteen and all follow the life of the sweet main character and the ups and downs of her middle school years. If you have a middle school aged child, it’s a must-read for both of you. She’ll get a how-to guide to surviving, and you’ll have a nice flashback to your own middle school years.

9. How I Live Now by Meg Rosoff. I’ve already blogged about this book. Not sure how to categorize it. Fantasy. Post-apocalyptic war story. Love story. Brilliant writing. Won the Printz Award for best YA several years ago, deservedly so.

10. Fallen by Lauren Kate. Pure fun read for the Twilight-obsessed teen who’s sick of Twilight and needs another obsession. This time: fallen angels, another new trend. Bonus: it also includes a love triangle. Strange girl and the competing fallen angels who love her. I read this in one sitting and was relieved to learn there’s a sequel: Torment. (LOVE that title, by the way)

Happy Reading!
Posted by Jody Casella at 5:39 PM No comments:

If writing a novel is like driving through Texas, then finishing a novel, it stands to reason, is like crossing the border into New Mexico. I don’t know why I always picture myself driving west. I could just as well imagine the finish line as Arkansas. It doesn’t really matter. The point is I’ve driven hundreds of miles. I’ve written a book, for crying out loud, one that didn’t exist in this world just a few months ago. New Mexico. Arkansas. I’ll take either one.

I’m tired. Exhilarated. My fingers are literally bleeding. Funny story (or sad one, depending on your point of view): the stupid backspace/delete button on my laptop broke off. Apparently I tap it a lot with my middle finger. I couldn’t figure out how to put the thing back on. Even my handyman husband couldn’t do it. So I ended up with a little knobby button and for the past few weeks I’ve been tapping the heck out of that. The problem is there are a bunch of poky wires sticking up around it. Yesterday one of those wires stabbed my fingertip. I was writing like a manic, speeding down the last leg of tumbleweed-strewn highway. New Mexico was in sight. No way was a minor injury going to stop me. Anyway, it seemed appropriate. Bleeding on my keyboard. Smudges of blood around the broken delete button. And apparently my middle finger taps the letter K a lot.

It’s great fun to finish a book. It’s also kind of anti-climactic. For a few months, you live with the characters spinning in your head. You hear snippets of dialogue in the shower. You wake up dreaming what will happen next. Then suddenly it’s over. You’ve written the last word. In this case: night. Then you close up your bloody laptop and realize your house is a disaster area. You haven’t scrubbed toilets in weeks. Your kids are really really tired of eating chocolate chip pancakes. And that used to be their favorite food. It’s time to rejoin the world of the living. The world of people who do not hear voices in their heads or scribble like maniacs on the back of grocery receipts because they just thought of a good line.

But first you must do something to celebrate. My all-time favorite finishing a book day happened last summer. I sat sniffling at my kitchen counter because I’d just written this majorly touching final scene. Oh. I was finished. My beautiful book and my sweet little characters were going off to a better place. The end. And I was home alone. With no one to tell. My husband was out of town. The kids had escaped the house and their distracted manic mother for the day. I called my neighbor. She’s a non-writer but seems to find me amusing. She came right over and she let me tell her all about it. She didn’t even seem bored. Maybe it helped that we drank a bottle of champagne.

My second favorite finishing a book day started on an airplane. I was going out of town for a writers conference. My plan was to finish the book I was working on before I left. But life intervened. I had a marathon week of writing—crazy 3000 word days and lots of chocolate chip pancakes for the kids. Still, I couldn’t finish before I left. I came to the second to last chapter and ran out of time. A non-writer may not understand how hard it is to take a break when you’re at this point in a novel. Imagine closing a book you’re reading when you’ve got ten pages left. It’s something like that, except add to it the fact that your head’s about to explode with the final scene you want to write. I took a notebook with me on the plane. I hadn’t hand-written anything in years, but as the plane took off I began to write furiously. I could feel myself nearing the end as the plane started its descent. I don’t know what my face looked like when I wrote the final word. (Yes. In case anyone is wondering) But I know what I was thinking. I was flying. I was caught between crying and laughing. I wanted to jump out of my seat and yell: Guess what, everyone on this plane, I just finished writing a freaking book! Instead I just sat there clutching my notebook. When I looked up I noticed the woman across the aisle staring at me. Her expression said it all: what the hell was that lady writing in her notebook?

A book. I wanted to tell her. But I didn’t. I just smiled. My best writing friend picked me up at the airport and we celebrated with champagne.

It’s a big deal to finish a book. It also, on many levels, I’m sad to say, means nothing. Especially when you’re plugging away as an unpublished writer. So you’ve got to take your joy where you can get it.

Here’s what I’m about to do: Clean off my bloody keyboard. And crack open a bottle of champagne. Throw out the pancake batter and broil up some steaks.

Cheers. Until January. When I have to revise this giant mess.
Posted by Jody Casella at 4:25 PM 2 comments: