and I don't have a father. I mean, I did have a father, but he died when I was barely out of first grade, so I didn't know him. I had a stepfather for seven years, but he wasn't what anyone would've called a father. I don't think of him on Father's Day.

On Father's Day I think of other fathers. My husband, for example, who is an excellent father. And his father; also, a good parent. Being raised by a good parent probably leads to good parenting, but it's not a prerequisite. Thank goodness, or else how many of us would be in trouble?

As a kid who did not have a father, I was curious about them. Friends' dads. Neighbors. Uncles. But for the most part I didn't give them much of a thought. And then Father's Day would roll around and it was time to make a Father's Day card in school and you'd see commercials of men grilling and fishing and how you should buy your dear old dad a tie or cologne or whatever. For me those commercials may as well have been talking about space aliens. And sometimes it hurt to be reminded of what I didn't have and would never have.

All of this is to say that I try to be mindful when it comes to kids and whatever their particular family arrangement is. But the other day my mindfulness went out the window. What happened is I was working at the desk at the library and a mom came in with two kids.

This one, she said, gesturing at a boy around twelve years old and happily bookish-looking, isn't mine. He's a neighbor and he wants to check out books today but he doesn't have a library card.

I sat up straight, eager, of course, to help, but explaining the unfortunate but necessary rule that while minors may apply for a library card, they've got to have a parent or guardian with them to finalize the deal.

But hey, I said brightly, you can ask your mom to come back with you later, or tomorrow. Fill out the application online. It takes like, three minutes.

And then I had a better idea. Maybe, I said to the kid, you have a library card already? Your mom might've gotten one for you when you were little? I can check the system for you.

The kid looked anxious, but hopeful. He gave me his name and birthdate, and sure enough, there he was in the system! I don't know who was more excited about it, him or me. Come back up to the desk, I told him, when you've got your books and I'll check you out. You can ask your mom for the card when you get home and if she's not sure where it is, the next time you come in, I'll give you a new one.

He nodded and headed down to the youth section, but the neighbor mother lingered at the desk. I thought she was going to compliment me on my quick thinking and expert management of the problem, but instead, she leaned in a little and lowered her voice.

Not a big deal, she said, and he never would've told you himself, but he doesn't have a mom. He's got two dads.

Not a big deal, the woman said again. Just thought you might want to know.

I do, I said. Thanks! But internally I was still wincing, scrambling back through the earlier conversation, all of my mentions of mom and why had I made that assumption and here we are at the library, a place that strives to be safe and welcoming to all.

When the boy came up later to check out his books, I was still feeling like a ding dong. I didn't want to say Dad this time or Dads because I didn't want him to know what his neighbor had shared with me. Twelve-year-olds, I know from experience, don't feel comfortable learning that adults have been chatting behind their backs, and who can blame them. Instead, I said what I say to all of the patrons who stop by my desk.

Have a nice day!

And I do hope he had one, has one. Odds are, he will. A kid with two dads on Father's Day. My childhood self would've been over the moon.

Posted by Jody Casella at 5:16 PM No comments:

Please This Is a Wedding Dress: A Drama in Three Acts

Act One
It's Tuesday and my errand for the day is: mail my daughter's wedding dress to her. A few months ago she visited and tried the dress on for me (Beautiful!--SHE'S beautiful, the dress is beautiful! Exciting!--I can't believe she's getting married in four months! But also, sad-ish--my little girl is all grown up!) The dress fits perfectly and she wants me to store it in our house, which I am happy to do,
but then, she changes her mind and would like for me to mail it back. I am fine with this, although, a tad anxious, not totally confident in the US Postal Service, and further complicating matters, the Ship and Sell place I'd been using to return Returns, recently lost a Return. So, what to do?
I fold my daughter's dress and place it carefully back into the box and head out to tackle the task, choosing the nearest package-mailing place, which I will henceforth call: the POO-PEE-PESS Store.
Act Two
The guy at the counter is young-ish and bored-ish, but dutifully takes the box and asks me where I'd like it mailed. While I'm reeling off the address, I am not-watching and watching as he sticks three rather small pieces of tape around the box.
(A word about this box: It opens on three sides. The dress is accordian-ed into it and threatening any moment to poof out. Will three small pieces of tape keep the thing safely secured? I don't know!)
"Excuse me," I say, "could you add a little more tape to that?"
The guy looks at me boredishly. "It's got enough tape on it." He moves on with the transaction and I fiddle with my credit card, popping it into the machine as I eye the box and the very small amount of tape again. If I had done this at home, I would've strapped half a roll of tape around the box and maybe that would've been overkill, but really, is there something between half a roll and three small pieces that might be... better?
"Okay," I say, and I chuckle a little to show the guy that I am cool and not possibly, a nutjob. "But could you just humor me and add a few more pieces of tape? This is an important package."
The guy looks at the box, a hint of an eye-roll threatening. "Trust me," he says. "There's enough tape."
"Yeah," I say, chuckling again, but more manically this time. "I'm asking you to add more tape. Please. This is a wedding dress."
He looks at me. I look at him. He shakes his head. No.
My heart is banging. Blood is sloshing around inside my skull. I am imagining the dress spilling out of the box on a roadway, its copious lace tearing and unraveling. I won't be able to sleep tonight, I won't be able to live with myself if I don't get THIS GUY to put more tape on the box.
For a moment I am in the library facing the woman who wanted me to help her with her tax forms and I kept trying to explain to her why I couldn't do that and she kept growing more upset and why wouldn't I help her and finally I walked away and sent the Circ Manager Who Gets Paid the Big Bucks to deal with situations like that.
But there is no one else working in this POO PEE PESS Store!!
Act Three
I grab a roll of tape off the wall and not chuckling at all, I tell the guy I am buying this tape and I am taping the box myself. He stands aside as I do that, then we complete the transaction, with an additional eight dollars and eighty one cents for the tape.
I pay for it gladly and burst out of the POO PEE PESS Store sweating and jittery, only thinking when I get into my car that I should've taken the box back from the guy, told him to F off and gone some place else, but what are you gonna do. Sometimes we are at the mercy of the world, the bored, the disinterested, the unwavering, the just-doing-their-jobs,
and okay, maybe I should've been kinder to that lady at the library who didn't understand why I was the last person in the world who should be giving tax advice to anyone. Even so, I could've been kinder, I truly could have been, and next time I will be, I promise, I PROMISE, but in the meantime, let the tape hold.
Please. Let the tape hold.
The End
PS: It did. 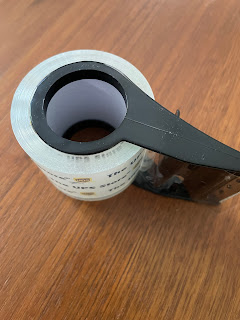 1. You can pour boiling water directly over freshly pulled leaves from the garden (mint, sage, raspberry leaves) and make a very tasty cup of tea. 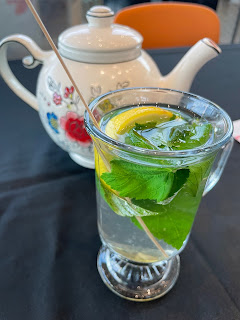 2. Never try to help an impatient crochety patron on the computer who is trying to interpret a complex tax form and English is her second language and you are wearing a mask and your body decides at that very moment to have a hot flash.

3. Butterfly bushes are bad and you should never plant them, and okay, you THINK you're planting a bush that will attract butterflies, which sounds like a good idea, but then the butterflies will lay eggs on the plant, and caterpillars will hatch, but they can't eat the butterfly bush leaves, so you've pretty much stunted their entire lifecycle, and what kind of cruel joke is this nonsense?!

5. Never repost a heart-wrenching poem written by a grieving mother on your social media account without first checking to see if the poem was actually written by the person you thought wrote it.

6. Addendum: Never repost anything on your social media account.

7. If you sign up to attend a special program at the library on How to Turn Your Backyard into a Certified Wildlife Habitat, you will show up to the event and find to your surprise and amusement that every single person in the audience is, like you, a middle-aged white woman who has quit coloring her hair.

8. Deep fried deviled eggs at the Boone Tavern in Berea, Kentucky. I know. I know. It sounds... gross. It did to me too. But, trust me. So freaking good. 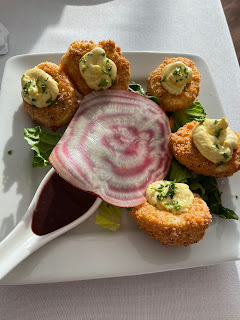 9. When you stumble across an urban farm (down the street from the Boone Tavern in Berea, Kentucky) and you excitedly strike up a conversation with the farmer about pollinator gardens and seed exchanges and you'll think you've found a kindred spirit, another gung ho Let's grow herbs and attract bees and make our own tea, but realize very quickly that this guy is next level serious when he tells you that this is no hobby for him (like it is for you, is the implication) but that the entire global food chain is one step away from collapsing, and oh my God, I need to get home right now and plant more food in my backyard. 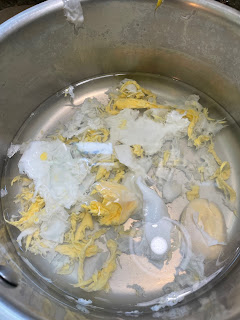 Posted by Jody Casella at 1:57 PM No comments: