On Slowly and Quietly Standing Up

A few months ago I heard the novelist Colum McCann speak at a luncheon. Colum McCann is the author of nine books, including Let the Great World Spin, which won the National Book Award in 2009. I hadn't read any of his books. The truth is I had never heard of Colum McCann. I only went to the luncheon because a writer friend had invited me.

As soon as Colum McCann began to speak, I rustled around in my purse as quietly as I could to find a pen and my little notebook. I had a feeling that I might want to remember what the guy was saying.

Stories are important, he said in his lovely Irish accent. We each have stories to tell, stories only we can tell. It's important--as human beings--that we do this.

I nodded in agreement, but I didn't write it down. I knew it already. If I believe in anything, I believe in this.

He went on to to talk about how scientists have done studies. They've looked at our brains when we tell stories, when we write stories. Apparently, our brains light up. Something powerful is going on. What's fascinating, though, is that the same kind of lighting up of the brain happens to the listeners of stories.

When we hear another person's story, we experience it too. We feel what he feels. We step into her shoes if only for a moment.

"You can't hate someone when you know their story," Colum McCann said.

He called on the audience to practice radical empathy--truly listen to what other people are saying-- even people who seem to us to be close-minded, people who are unwilling to consider other points of views. It may be hard, but we must listen and listen and listen until the other person is storied out.

Only then can we begin to bridge whatever gaps we have between us.

I don't know if this is true. Some days the gaps between people seem unbridgeable to me.

I do what a lot of people I know do: I feel immense outrage and horror and sadness. I rant and rave to anyone who will listen. Or I mock everything.

How stupid people are. How crazy. How ridiculous.

I turn off the news when it gets to be too much. I immerse myself in a seemingly endless array of entertainment options--anything to forget how lucky and privileged I am. Because if I don't think about it-- I don't have to do anything about it.

But not very deep down I know that I am one of the carriage riders in Les Miserables, flying past suffering and abject poverty. I am a laughing clapping audience member sitting in the front row of the Hunger Games.

The other day my little notebook fell out of my purse.

I flipped through the pages and found the notes I took when I listened to Colum McCann. Think of others. Listen to others.

And then what, Colum McCann?


Posted by Jody Casella at 5:40 PM No comments:

I go through a weird depressing manic cycle. Maybe you are familiar with it too.

A horrible shit thing happens. You see it or read about it on the news. Five sleeping and sometimes not sleeping girls are molested multiple times by their brother. A teenager at a pool party is grabbed by her hair and thrown to the ground. Nine people are killed at a bible study.

I feel horror and outrage and disgust. I torture myself by reading the idiotic and vapid responses, the inevitable framing of the horrible shit thing along party lines.

I go back to my writing or digging holes in my garden or reading books or watching silly movies and TV shows until the next shit thing happens.

And the cycle begins again.

Recently, for a research project, I came across a horrifying picture online. It's an old picture, something tucked safely into the past, but still terrible to stumble upon. It's a black man hanging from a tree and crowd of white people standing around him. I feel a visceral revulsion when I see a picture like this. I am sick at the sight of the person who has been murdered. But I am also sick at the sight of the onlookers.

I used to pat myself on the back when I saw pictures like this. First, because I would tell myself those kinds of things don't happen anymore. This particular picture was taken in 1935. Some of the people there turned the picture into a postcard. This would never happen today, I tell myself.

I know what I would have done if I lived in Fort Lauderdale, Florida on July 19, 1935. I would have been sitting in my house. Maybe I would've been listening to the radio or reading a book or cooking a meal or cleaning up dishes. I wouldn't have known what was going on. Or maybe I would've known and felt disgust and horror and outrage, but it was happening somewhere else in my town and so, did not involve me or anyone I knew in any way.

Maybe I would've read about Reuben Stacy's murder in the paper the next day or heard about it from someone else. I would've felt sad and helpless and powerless.

And then I would've gone back to listening to the radio or reading a book or digging a hole in my garden. 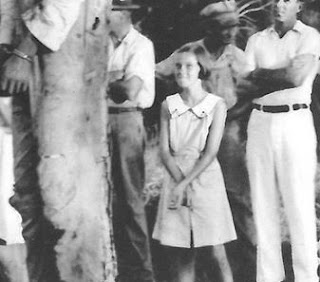 Posted by Jody Casella at 9:00 AM No comments:

A few weeks ago I was milling around at the annual Ohioana Book Festival in downtown Columbus and ran into one of my neighbors, Scott Zanon. I've known Scott for eight years, but only in the sense that we live on the same street and I am in a neighborhood Bunco group with his wife.

I had no idea that Scott is a writer and so I was surprised to find him signing at the festival, and I practically keeled over in a serendipitous swoon when I saw the topic. TREES. I happen to be writing a book about a dryads, and fun fact: dryads are connected to trees. For months I've been doing tree research and all along, there was Scott, a few houses down from me, a freaking tree expert!

We got to talking--mostly this was ME, asking him stuff about trees and probably sounding like a complete loon--and then the conversation turned to wine. Fun fact number two: I like wine. Scott, my mild-mannered neighbor, is a writer AND A WINEMAKER.

So after the festival, I bought a bottle of Scott's wine and we sat down in the virtual sense and chatted.

Jody: (drinking Scott's wine) Okay. This is good. First, I've got to know: how did you become a wine-maker?

Scott: I previously had spent sixteen years in the wine industry from both the retail and wholesale side. Zinfandel has always been one of my favorite grape varietals and over the past ten years the style of this wine has changed. Most of them available on the market are high alcohol, jammy, fruit-bombs that do NOT go with food. So I decided that I would create my own Zinfandel in the style that I grew to love in the 90’s, one that is lower alcohol, medium-bodied, with slight nuances of pepper, oak, and acid. It smells and tastes like the grape. It is the way Zinfandel should taste.

Jody: (drinking more of Scott's wine) This is really good. Admitting here that I know absolutely nothing about wine-making--I'm picturing the old I Love Lucy show with Lucy stomping around in a barrel of grapes-- but how does an Ohio guy end up making a California Zinfandel?

Scott: I've been long-time friends with a third generation Italian family who have been growing grapes and making wine since 1927. I went to them and asked if they would sell me enough wine to make 400-500 cases a year in Ohio only. So I flew out to California and we struck a deal. I go out to the beautiful Sonoma County twice a year for harvest in October and to blend in April. They give me estate grown and bottled wine and I blend my style.

Jody: And you set up some kind of distribution here in Ohio?

Scott: Right. I had to get a wine distributor in this area who buys, stores, distributes and sells the wine. When you are as small as Zanon Zinfandel is, it's difficult to get placements. But once folks try ZZ, it becomes much easier. I do as many tastings as possible.

Jody: It seems like it's working out for you. I was at the local supermarket the other day and saw a huge display. I was so excited. I know him I kept saying to everyone who walked by. So you're doing well...

Scott: Yes, but I'm really doing this for the fun and certainly not for the narrow profits it generates. Introducing a style of wine to folks is satisfying as well as having one’s name on the label. Of course that also brings high expectations, but I would never bring an inferior product to market. I am most proud that the label states Zanon Zinfandel Dry Creek Valley. This region is truly the best are in the world to grow Zinfandel.

Jody: Totally switching topics on you, but how did your tree book come to be? 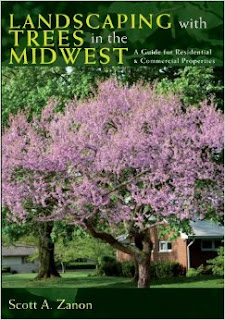 I was Chair of the Green Committee at the Ohio State Golf Club for ten years and in 2003/04 the vaunted Scarlet Golf Course underwent a much needed and large restoration. I was appointed Chair of the Scarlet Restoration Committee and we removed many trees from the golf course to allow sunlight and air circulation. We started to discuss what trees to re-plant into some areas and there was nothing out there to help or guide us through the process. That is where the seed was germinated for the books.

In my latest book I describe sixty-five desirable tree varieties, their characteristics, and their uses. There are more than 325 color photographs--

Jody: Those photos are stunning, by the way. Did you take them?

Scott: Thanks. I did take most them. I wanted to illustrate the appearance of each species through the seasons – including height, shape, bark, flowers, and fall colors – as well as other factors that influence selection and siting.

Jody: Would this be a resource more for a professional landscaper to use?

Scott: Professional landscapers would definitely find it helpful. The book includes a table of growth rates and sizes, a map of hardiness zones, and plant usage guides by categories. I also touch on underused species of woody plants that are overlooked in the industry and discuss areas of concern for landscapers, such as the Emerald Ash Borer.

But gardeners at all levels of expertise have found the book to be a useful visual reference--something that helps them make informed choices when landscaping.

Jody: Nothing in there about dryads, though.

Scott: Ha. No. But I am working on developing a picture book. I've teamed up with an illustrator and we're in the process of searching for a publisher.

Jody: Well, best of luck to you! Thanks so much, Scott, for talking with me today and sharing this bottle of wine. 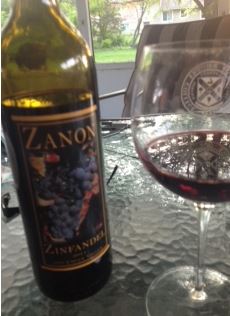 For more information on Scott Zanon's wine... or trees, see below.