1. the drumstick-less/one-winged turkey, ordered from the farmer's market and arriving from the processor looking like a frankenstein-gaping-holes-in-the-sides horror show, but which turned out to be surprisingly tasty and gave my friends and family on social media a laugh on Thanksgiving morning.

2. lights on my neighbors' houses 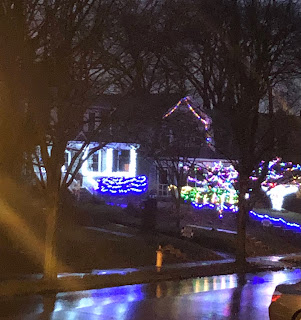 4. this dumb game that my daughter loves and I don't really like it but I play it with her anyway and now I sort of like playing it after all. 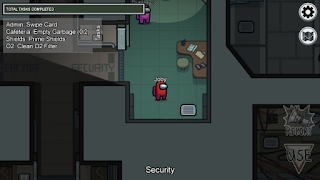 5. digital puzzles on my library's website  because they are addictive and meditative and there are no pieces to turn over or drop off the table.

6. everybody has matching Christmas sloth pajamas 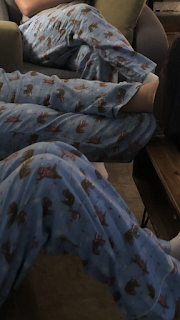 7. s'mores around the fire pit

8. My best friend has a best seller! 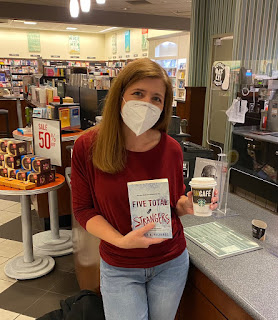 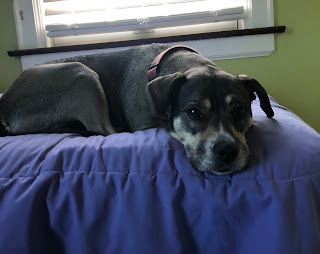 10. my job at the library where I get to have fun conversations about books with people through a window, six feet apart and through masks, except for this one day when an elderly lady wandered up, maskless, looking confused and asked me if she could ask me a question.

Of course, I said, staring uncomfortably at her bare face.

Because sometimes I don't always know what's going on, she said, And I want to. I want to pay more attention, I want to know what things are and be more in the present moment, you know what I mean?

(Well, we're in the middle of a global pandemic and you're supposed to be wearing a mask), I didn't say, nodding. What's your question?

What kind of tree is this behind me?

I told her I didn't know and I gave her one of the Identification of Trees in the Park handouts we have and she wandered off, curiously and at the same time cluelessly, and it hit me that this is me, this is all of us, and I just hope she makes it through unscathed,

and that you do, too.

Yesterday I drove past the hospital

the sky was gray going to black and I was listening to the end of the audiobook, We Were Eight Years in Power by Ta-Nehisi Coates.

As always, when I drive by the hospital (it's my usual route home from the library where I work) I think of the night my husband had a kidney stone, but we didn't know yet that was why he was in so much pain, and because we are in the middle of a pandemic, I had to drive him to the emergency entrance and basically dump him out of the car and watch him stagger inside alone.

Most nights, when I drive by the hospital and look over at the emergency room entrance, there are only a few cars pulling up to let people out, but last night the cars were lined up, two deep. We Were Eight Years in Power was reaching its conclusion, Ta-Nehisi Coates speaking louder and more forcefully.

The book is a collection of essays he wrote during the Obama presidency. It's also about the racial injustice and inequality that's been pretty much baked into our country since before its founding. The cars were lined up outside the hospital emergency room, I suspect, because the virus is running rampant in our state. A couple of weeks ago we were at 3000 new cases per day. Now we're at 8000 and rising. A doctor from the Cleveland Clinic was on the news begging people to stay home. Last spring his hospital sent doctors to New York during their nightmarish spike. But now, he said, no one will come to save us.

And so the most powerful country in the world has handed over all its affairs—the prosperity of its entire economy; the security of its 300 million citizens; the purity of its water, the viability of its air, the safety of its food; the future of its vast system of education; the soundness of its national highways, airways, and railways; the apocalyptic potential of its nuclear arsenal—to a carnival barker who introduced the phrase grab ’em by the pussy into the national lexicon. It is as if the white tribe united in demonstration to say, “If a black man can be president, then any white man—no matter how fallen—can be president.”

Green light, and I left the hospital behind. I turned down my street. The Starbucks on the corner, the Starbucks that always has a line spilling out onto the road, was dark. Closed.

Too many workers home sick now to keep it open. 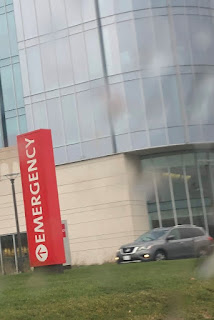 Email ThisBlogThis!Share to TwitterShare to FacebookShare to Pinterest
Labels: an American Tragedy, global pandemic, Ta-Nehisi Coates, We Were Eight Years in Power

The last time it was Friday the 13th

and I went to work at the library. It was the day before the lockdown in our state. Only for two weeks, the governor said, just to calm things down. Which was weird because we only had four confirmed cases of Covid, but we at the library were going with the flow. Helping the mass of people streaming in to check out books and movies. Something to pass the time during quarantine.

That was the last time I was in a crowd.

Flash forward eight months, and our library branch doesn't allow people inside the building. Now we help patrons at our walk-up window. Talk through our masks. Slide books and movies through the slot along a six foot long board, positioned there to keep us at a distance.

November 13 Ohio had its highest number of new cases in one day: 8,071. And 40 people died. There's a fear we'll have to lock down again. But kids are playing in the park. People are walking their dogs. That's a thing I've learned about this slow-moving tragedy. How easily most of us have adapted.

March 13 my husband and I didn't have any hand sanitizer in our house. Except for a couple of n95 masks bought for a painting project, we didn't own face masks. We had one nine-pack of toilet paper tucked under the bathroom sink. I didn't know what Zoom was.

November 13 and we have hand sanitizer and masks scattered all over the place. I can't stop buying packs of toilet paper. We're planning a Zoom Thanksgiving. Our daughter is helping us set up the link.

March 13 she was living on her own in London, going to grad school, planning for a summer of travel across Europe. Now she's living at home, back since May. She finished up her dissertation in her bedroom. Spent her summer helping me in the garden.

Now the weather's turned cold. Outside at night you can smell the smoke from neighborhood firepits. We set ours up in the center of our driveway, spaced the chairs a safe distance apart. This is a lost year, I've heard people say. We're all itching to go back to normal. But sometimes, sitting around the fire with friends,

it feels like we have already made it through. 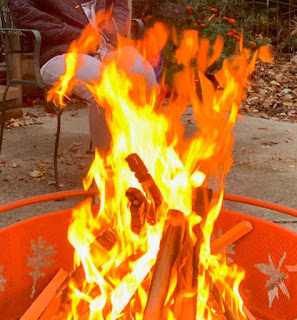 Posted by Jody Casella at 6:58 AM No comments:

This is not about the election

But it's about a different election, 20 million years ago when I was a young mom, home with my two little kids and we didn't have cable TV and of course there was no social media to be addicted to, but still, I somewhat followed the news, and the news was that on election night, there would be a winner declared.

I told my son this news very confidently and he believed me because my word was gospel to him and the only time he even came close to doubting me was that time he ran across the backyard barefoot and got stung by a bee and screamed at the top of his lungs, in pain, but more, I think, because he was enraged at me because I'd told him not to be afraid of bees, that bees would only hurt you if you hurt them.

While I tried to treat the bee sting, he screamed that I'd lied to him and he DID NOT HURT THAT BEE! And I told him that Okay, true, he hadn't hurt the bee on purpose, but he had, in fact, stepped on the bee and even if that was by accident, the bee didn't know it and was now dead.

All was forgiven at that point and I was back in my son's good graces and a fount of trust and wisdom for him again, until--

That night my son's first grade teacher had given the class a US Map so they could color the states red or blue and an assignment to create an election booklet, which would include pictures of each candidate and a little write up about each one, with the last page showing a picture of the winner.

My son stayed up watching TV long after his bedtime and most of the states were colored in, but Florida was looking iffy, with some TV stations calling it for one candidate but then backtracking, which was all very confusing and my son was getting upset about what to do with his blue and red crayons.

We sent him to bed and he was a wreck about it. HOW WAS HE GOING TO FINISH HIS HOMEWORK ASSIGNMENT? WAS FLORIDA RED OR BLUE? and WHICH MAN WAS THE PRESIDENT?

I promised him he would know in the morning.

Dear reader, do I need to tell you that the tears of outrage and betrayal the next day greatly surpassed those of the Bee Sting Incident?

That problem was fairly easy for me to solve for my son: Put both of the candidate's pictures on the last page.

But it was not easy for everyone else and twenty million years later, with many of the same people in THIS election involved in THAT election (SEE KAVANAUGH. SEE AMY CONEY BARRETT, both lawyers advising Bush's team when his BROTHER the governor of Florida and the Supreme Court stopped the recount with Bush 537 votes ahead--giving him the state and therefore the election) which at the time I wasn't as outraged about as I should've been,

probably because I was a young mom with little kids at home and it was simpler and infinitely more comforting for me to believe that the people in charge had our country's best interests at heart and would never knowingly deceive us by putting power and party over country,

So I was wrong. 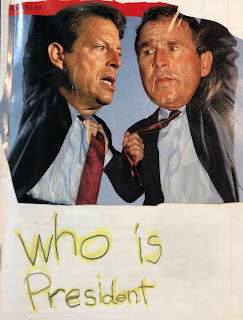