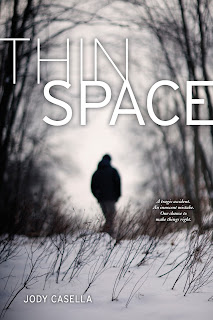 There’s a fine line between the living and the dead, and Marshall is determined to cross it in this gut-wrenching debut novel.

Ever since the car accident that killed his identical twin brother, Marshall Windsor has been consumed with guilt and crippled by the secrets of that fateful night. He has only one chance to make amends and set things right. He must find a thin space—a mythical point where the barrier between this world and the next is thin enough for a person to step through to the other side.

But when a new girl moves into the neighborhood, into the same house Marsh is sure holds a thin space, she may be the key—or the unraveling of all his secrets.

As they get closer to finding a thin space—and closer to each other—March must decide once and for all how far he’s willing to go to right the wrongs of the living…and the dead.

And here's the story behind Thin Space.

Searching for thin spaces... (the story behind the research)

A book trailer
(made by awesome Florida librarian, Elizabeth Zdrodwski)
An angsty/depressing playlist (plus another book trailer made by a fan AKA my teen daughter)
A live chat with very cool YA book blogger/reviewer Rachel Silberman

"A creepy supernatural chiller sets up a gut-punch of desolation and loss...Brutal and brilliant." --Kirkus starred review

"A spooky story of the highest order... atmospheric and chilling." --School Library Journal

"Casella debuts with a moving story about a grieving teen whose search for closure is driven by the potential for, instead of the presence of, the supernatural." --Publisher's Weekly

"A convincing portrayal of a young man’s staggering loss—of both sibling and self." --Susannah Felts from Chapter 16

"Casella’s use of the thin-space legend is original and intriguing."
Michael Cart, Booklist

“Sometimes you need a book that hurts so good, and Jody Casella’s powerful, authentically told debut is one of those books. Thin Space carries you through the heart of what it means to love and lose, to regret and move forward… and won’t set you down until long after its riveting finale.”
JENNIFER CASTLE
author of Beginning of After and You Look Different in Real Life


“An eerie yet ultimately hopeful exploration of grief, guilt, friendship and redemption, Thin Space captivated me from start to finish.”
COLLEEN CLAYTON
author of What Happens Next

“Take off your shoes and prepare to stroll barefoot through a novel richly grounded in love, loss, and the redemptive power of truth. But don't get too comfortable, because the twist at the end will knock your socks off."
MIKE MULLIN
author of Ashfall

Interview with "Marsh Windsor" on A Life Bound by Books

Guest post on why I wrote a standalone novel (and my secret about the sequel...) on Icey Books

Review from one of my favorite YA reader blogs Books, Bones & Buffy