which puts you in just the right, festive mood. Only five of us this year celebrating, but that is one more than last year, so it feels like a win. Last year when there was no vaccine for us and no easily available covid tests and every day was scarier than the day before and there you were, Christmas morning, alone in the kitchen, weeping over Judy Garland's Have Yourself a Merry Little Christmas, where she says something along the lines of someday soon we all will be together but in the mean time we have to muddle through somehow. And we did that,

muddle through somehow, I mean, and here we are now, in our matching holiday gnome pajamas, vaxxed and boostered and freshly tested, and for today, anyway, negative. That ten minutes though, anxiously eyeing the swab and the lines on the home-testing-kit tray, I am the Schrodinger's Cat of covid, both positive and negative, and how different this week will be if things tip one way or the other. The trick, I think,

is to stay positive about being negative. Or maybe just let the idea go, once and for all, that we can control anything. For the record, we can't. I am loving these holiday gnome pajamas. For the first time in twenty five years I don't make the Christmas dinner. I don't even help. It's weird. And then it's slightly uncomfortable. And then I let that go too and I enjoy myself immensely. I want to write something funny,

something moving, something honest, but I can't control my words either. They come or they don't. I wear the holiday gnome pajamas all day, even when I walk the dog around the neighborhood, which is funny, now that I think about it. Later, we face-time with family who can't be with us. Text and send pictures. One of my daughter's gifts is a Polaroid printer. You take a picture on your phone, and print it off on the printer and out comes a Polaroid photo, which we then take a picture of on our phones, which we then send to others.

It's the five of us, sitting together in our holiday gnome pajamas, one snapshot of time before we stand up and go our separate ways again into the next moment and the next, muddling through somehow, but for now, this moment, we are here on a couch, in a picture, in a photo, on a phone 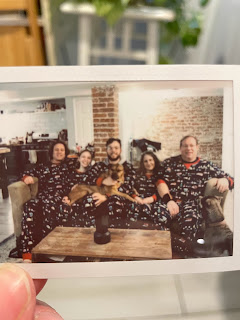 Posted by Jody Casella at 8:24 AM No comments:

We are in that place again

where the virus cases are exploding and the hospitals are at their breaking point and long gone are the days when we would say We're all in this together and Let's flatten the curve. There is no curve. What we have now is a line zooming straight up. At the Starbucks at the end of my street the line

of cars waiting in the drive thru stretches out into the road and blocks traffic. Blocks me, on my way in to work and I find myself screaming one afternoon through the windshield at the car in front of me who won't move. MOVE, I scream at him. MOVE. Strangely, it helps, the screaming. That, and yoga. Stretches in front of the TV, a ten minute meditation, the happy yoga girl in front of her brick wall and carefully posed plant, her soothing voice telling me to breathe.

I want to bubble wrap my adult children.

At the library people burst inside frantically looking for covid home testing kits. Sometimes the kits are in. Sometimes they are out. When they are out, I offer to call the county library system to see if they have any. A woman stands in front of my desk, hack-coughing. I'm vaxxed, she tells me. And boostered. Maybe this is a cold?

Sure, I tell her. It's probably a cold. And all the while I am inching my chair back, internally screaming MOVE. GET THE HELL AWAY FROM ME. But on the outside, I smile. I breathe. I tell the woman where she can find a test and she thanks me, more profusely, probably, than I deserve.

Seriously, though, about the bubble wrap. Do they make it in the size of your adult children? My son and his girlfriend currently #van-life-ing across the country. My daughter and her fiancé braving public transportation and the crowded store where my daughter works, never mind the crazy pro-birther people sporadically picketing outside the building next door, the pizza restaurant which these deluded zealots fervently believe is a front for a child sex ring and so a co-worker has to escort my daughter to her bus stop.

There is not enough bubble wrap in the world for this kind of world, but on the bright side, I snagged some of those hard-to-find covid tests before we ran out at the library. And as of today, anyway, I can still move. I can scream. I can smile. I can breathe. 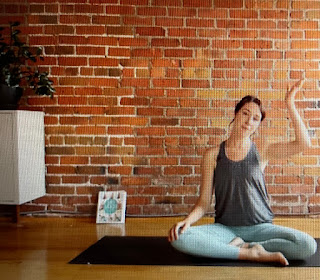 It's weirdly fascinating watching the new Beatles documentary, all of the hours they spent fooling around, chatting and bickering, trying out new songs, drinking tea, mumbling potential lyrics, sometimes walking out on each other and then walking back in. The creative process, if you're not familiar with it,

is many parts blather and grinding out the work, with an occasional burst of a perfectly pre-formed melody, and who knows where that magic comes from. Who was it who said, "Invention is 93% perspiration, 6% electricity, 4% evaporation and 2% butterscotch ripple"?

Of course, when you're a writer, unlike, apparently, when you are a Beatle, you're entirely alone, and only the blank page or laptop screen in front of you. Willy Wonka, by the way, is the one who said the thing about perspiration and butterscotch ripple. He was so right about those percentages. The other day when I was working the desk at the library,

a woman circled around the Christmas tree we've set up. She'd just come from our weekly English as a Second Language Conversation Class and seemed curious about the gift tags hanging on the tree, pulling one off and holding it up to me. What is this? she said.

I explained that every year the library works with a social services agency in town to invite our patrons to purchase something from a child's wish list. A needy child? I said, wondering if I was making sense. For families who can't afford presents?

Oh, she said. She looked at the tag, and said, What is this?

Onesie for a 12 month old was written on the tag.

I started to describe what a onesie is and then did a quick search on the computer and showed the woman the examples on the screen, which immediately made me think of my own children when they were babies, those middle of the night cries on the baby monitor, the bleary-eyed unsnappings and snappings and fumbling for the clean diaper, and thank God

we could afford to buy baby clothes. But back to the woman, who was nodding seriously at the computer screen. I understand, she said. Thank you. I got teary-eyed watching the Beatles,

Paul McCartney strumming the guitar, muttering nonsense, the music of a familiar song slowly and then all at once taking shape, while the other Beatles yawn and look on and then just as suddenly begin to strum and clap, Get back to where you once belonged, as if they had been there with Paul all along, as if the song was there too and just waiting for all of them to find it. The next day, the woman marched up to the desk,

holding the onesie still on the store hanger. This? she said to me, and I said, Yes, that's great, perfect, exactly right, thank you so much. She nodded again, that same serious expression on her face that seemed to say I understand. And only later did I wonder what it was that she understood. Who was it who said, "So shines a good deed in a weary world"?

Oh right. That was Willy Wonka too. Which has nothing to do with the Beatles or bleary-eyed midnight diaper changes or even the creative process really, and look

my page is filled with words now and probably only a fraction of butterscotch ripple, but good enough, I think, for today. 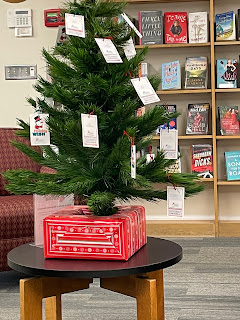 I was going to say

that every time I paint a room in our new-old house, I hate the people who used to live here. But that sounds harsh and I don't really hate them. First, I don't know them, and all I'm going by to justify my harsh feelings are the people's questionable decorating choices.

The orange ceiling, for example, in the dining room, the orange paint with glitter added to it, so it took two full coats of primer and two coats of ceiling paint to cover it, and even now, when the light slips through the windows in a certain way, you can see a sparkle.

Okay, that sparkle, I'll admit is kind of lovely. But did I tell you about the hole in the wall in the kitchen? This was left over from an old laundry chute, but the previous owners had blocked the laundry chute and put a shelf in its place and framed it, and now there was a random framed hole with a shelf in the middle of a wall and nothing

you could really do with that space, and my husband chipped the frame out and pulled out the shelf--the idea being, we'd patch up the hole and have a more useful space and counter area, but when he pulled out the shelf, something plopped onto the counter, a long ago bit of laundry tossed in the chute and caught by the frame--

--a pair of women's underwear--and Oh my God who knows how long that was hiding behind the walls. There are all kinds of surprises when you live in a new-old house. Upstairs on my hands and knees, prepping to paint the hallway, but first, trying to scrub off the yellowed cigarette stains on the walls, noticing every scratch and nick in the previous layers of paint, a square of decades old wallpaper behind a light switch plate, I want to forgive these people

for living in our house, and ask forgiveness too, from the people who will live here after us. I promise we haven't tossed dirty underwear behind the walls or glittered up our paint, but being what we are, human, I mean, we will have committed other decorative sins. Go easy on us. Please. We do the best we can with what we are given. 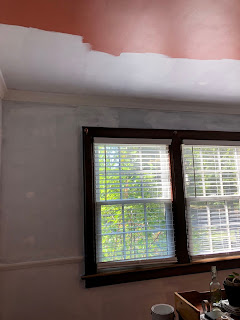