My Life in Drafts

I wrote the first draft of my tenth book in the winter of 2012.

That year my son was graduating from high school and I was on the verge of a book deal but wasn't sure if the deal would ever actually go through. This particular first draft was weirdly fun to write. Book number 10! and up to that point, none of the other nine had been published!

So mostly I was just writing for myself, month after gray wintery month, playing around with a meandery, blathery plot, a mostly stream of consciousness narrative, something I knew even then, when I "finished" it, would need a ton of work.

--until this past fall, when I metaphorically dusted it off, took a seriously look at it, and decided it was worth a second round.

Thus began Draft 2, the bulk of it reworked during the winter of 2016. I "finished" it a couple of weeks ago,

a few days before my son graduated from college.

how many people are coming to the college graduation party and does this crazy stream of consciousness style work or not and why is it taking me a week to write one scene and when exactly is my son moving across country to start his job?

I think it was T.S. Eliot who said he measured out his life in coffee spoons.

Apparently, I measure out my life in drafts. 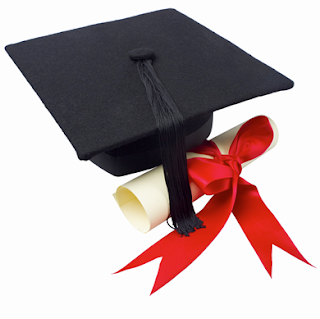 Email ThisBlogThis!Share to TwitterShare to FacebookShare to Pinterest
Labels: being a mom, college, first drafts, revision, taking a break

Once more I am thrilled to host Holly Schindler on my blog. Holly is the fearless leader of YA Outside the Lines, the author of multiple books for young adults, and my lovely, long time writer friend.--Jody

One thing both of my magical realism releases have in common is that the “magical” elements of both allow the settings to literally come to life. 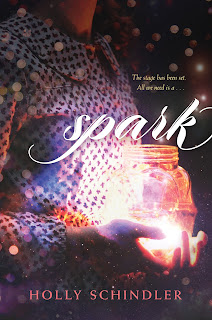 Actually, I’ve long been a fan of works that depict settings with such detail and vibrancy that the setting itself feels like a main character (think: Elin Hilderbrand’s BLUE BISTRO—a story that made me mourn for the loss of a restaurant the same way I would mourn for the tragic end to a character I’d grown to know and love), but the magical realism element allows me to take this to an entirely new level:


SPARK, my fourth YA (HarperTeen), focuses on the dilapidated Avery Theater—the site of a ‘40s-era tragedy. In order to depict the revival of the old theater, I depicted it as a living, breathing entity. When the MC, Quin, and her two friends come to the Avery, the theater comes back to life; its heart begins to beat again:

My independently-released FOREVER FINLEY is using magical realism in order to bring the small town of Finley to life. In my indie work, I wanted to experiment with formats that most publishers don’t often explore—specifically, this time around, I really wanted to get back to shorter fiction (a format I love but hadn’t written in much since my days as a master’s student). “Come December” was initially going to be a stand-alone short story. But I was so surprised by the response (I moved 19K copies during the holiday season) that I wanted to propel the story forward.


FOREVER FINLEY is a short story cycle, meaning each story is a stand-alone and can be read in any order; on their own, each story creates one picture of the town of Finley—when read together, they create another. People find themselves drawn to Finley for reasons they can’t explain; meanwhile, legends regarding the Hargroves, Finley’s founding family, swirl through the town. I don’t want to give too much away, because the tale is still ongoing! Once a month, I release a new short story—each titled for the month of its release. And I’ve got a big finale planned for this December! 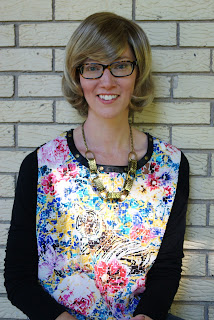 Holly Schindler Bio: I’m a hybrid author of critically concession acclaimed traditionally published and Amazon bestselling independently published works for readers of all ages. My previous YAs (A BLUE SO DARK, PLAYING HURT, and FERAL) have received starred reviews from Booklist and Publishers Weekly, won silver and gold medals from ForeWord Reviews Book of the Year and the IPPY Awards, respectively, been featured on Booklist’s First Novels for Youth, School Library Journal’s “What’s Hot in YA,” and been selected as a PW Pick. Kirkus praised by latest YA, SPARK, for “crisp prose [that] flows easily between the past and present,” and Booklist claimed the novel casts “a shimmering spell.”

I finished writing a book this morning.

I've been working on the thing pretty much every day since September and when I haven't been working on it, it's been in my head, snippets of dialogue in the supermarket that I scratch out on the back of my grocery list, and sudden cold sweats in the middle of the night when I realize I've got a gaping plot hole, and moments of excitement when I snap together pieces that just might solve that gaping plot hole issue,

but mostly it's day after day of psychologically girding myself, gearing up to write, and fighting back the demons in my head that whisper why bother why are you doing this it's stupid and pointless and opening up my lap top and writing anyway.

You think when you come to the end of the book you've been writing for eight months, you'll want to whoop it up. Drink a bottle of champagne. Tear out of the house shouting I JUST FINISHED WRITING A BOOK!

The truth is nobody really cares.

Also, the house is a gigantic mess because you've been neglecting it for eight months and suddenly you can see the layer of dust on all of the furniture and the tumbleweed sized dog hair balls in the corners and the fact that you've been wearing the same clothes for possibly days? and when was the last time you showered?

So, there's tons of stuff to do and after you take a shower and put on some different clothes, it's time to get to it. Answering a bajillion emails and taking care of business-y stuff and never mind figuring out what to do with this Thing-- the inevitable revising once you get it back from your critique partners-- and Hey! It's time to query it! and what will you write next? yadda yadda ya...

One of my friends asked me the other day, when I told her I was getting closer to the end of this draft, how I was going to celebrate.

Confession: I'm not big on celebrations.

I'm not sure what it is exactly about celebrating that bugs me. The expense? The party-planning aspect? Anything to do with cake and glitter? Plus, it feels a little narcissistic to me. (See above: nobody really cares.)

I don't mind participating in other people's celebrations.

This weekend, for example, my son's graduating from college, and my husband and I are throwing him a party. A graduation is a Thing worthy of celebrating. The culmination of years of hard work and study. The marking of the movement from one life stage into another. An opportunity to hang together as a family, as friends, as a community to acknowledge the person you love who's done This Thing.

Writing a book, while it feels monumental at times, is so much more solitary. Especially when there's no guarantee that anyone will ever read it. It's like running a marathon in the dark. You don't get a certificate of completion. There's no stage to walk across. No graduation cap to throw into the air. No Congratulations to The Book Writer cards in the stationery aisle.

*throws all the glitter* 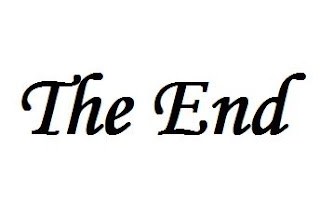 
Today I went into my garden and murdered a bunch of vegetables.

Tore the perky kale out by the roots. Sliced the lovely swiss chard. Ripped apart the darling purple cabbages. And I don't even want to tell you how gruesome things got in the carrot patch.

I hate this part of gardening.

Thinning, the professionals call it, which sounds so innocuous and easy. For those of you who are non-gardeners, thinning basically means pulling out seedlings so there is more space between plants. When I first started gardening I couldn't bring myself to do it.

So what if all of the radishes grew so closely together that they never actually, um...

Over the years I've tried to get a handle on my thinning aversion by experimenting with different solutions:

1. I planted seeds far apart to begin with.  (Easier said than done... some of these seeds are teeny tiny! Some never grow in the first place and there's wasted space where a plant could've been.)

2. I replanted the "thinned" seedlings in different spots around the garden. (This requires lots of work-- to dig up a seedling, roots and all, and get it going again somewhere else. And honestly, how many vegetables do I really need anyway? Example: the garden two summers ago where I had 55 basil plants.)

3. I left everything as is, without thinning. (see above: radish plants that never grow radishes because they are bunched up too closely to each other.)

In the end I came around to thinning and that is why I was outside in my garden today killing my carrots. 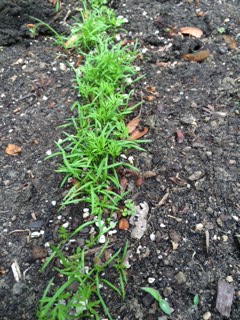 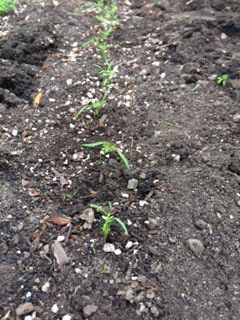 And much better. (sigh)

Also, a million times easier than what I've been doing inside my home:

Over the past few weeks I've been finishing up work on the second draft of a novel. I started the revision back in September and I was confident, then, that I could whip the thing into shape by Thanksgiving. I mean, Christmas. I mean, February. I mean, Spring Break.

I mean, two weeks from now.

One of the things that has tripped me up was holding onto my first draft.

As often happens with second drafts, this book has morphed into something different from what I originally thought it was. (better, I hope!) The story tightens up. The characters come into focus. The plot crystallizes and smaller sub plots fall away. Things I thought were important in the first draft don't make sense any more. Strands. Minor characters. Dialogue I love--funny bits, heartbreaking interchanges between people I've grown to believe are real.

Entire scenes. The first fifty pages. The last. The title.

All of it-- this stuff that once worked but no longer does-- has got to go.

I fight to hold onto it every step of the way. Maybe I can shoehorn in this perfectly crafted sentence Here? Maybe there's a place for this scene--at least half of it-- the one I enjoyed writing so much the first time around?

And inevitably, after much hopeful fiddling, I give up, resigned. And Snip.

Now I don't even miss it. Now I can't even remember what was so great about that bit in the first place. 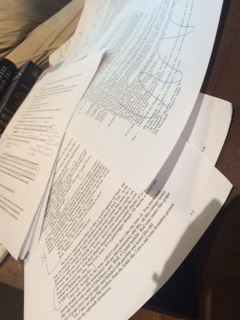 "In writing, you must kill your darlings," William Faulkner once said.