A Million Ways to Tell a Story

Some people think that Robert Frost’s poem The Road Not Taken is about the benefits of choosing the less traveled, more difficult road in life. The speaker comes to a fork in the woods and has to make a decision about which path to take. From where he’s standing he can only see so far ahead. Maybe he could stand there all day. Or go back in the direction he came from. But time’s ticking and he’s got to move on, so he picks a path and goes with it. Later he says that he chose the path less traveled by and “that has made all the difference.”

What I always liked about this poem is that there really is no way the speaker can know he took the road less traveled. He didn’t go down both roads, so he can’t compare. He can only guess. From where he was standing they looked the same. He’s right, though, that the path he did end up taking made all the difference. Whenever you make a choice in life (or in writing) it’s going to make a difference in the end.

I’ve been thinking about this poem because it’s hit me that whenever I write a story, I’m making choices about which path to take. Is my character going to do this or that? (Or more accurately, if I let my characters lead, which way will they choose to go?) I suppose I could freeze them where they are, let nothing happen to them. Or I could chuck out everything I have and not write the book. That’s a choice too. But if I do want to finish a story, at a certain point I just have to go with it—see where it’s going, and follow along until the end.

There are probably multiple wrong ways to tell a story. But now I’m wondering if there are multiple right ways to tell one too. The cool thing about writing is that I can conceivably go back (unlike the speaker in the Robert Frost poem—and unlike in real life) and try both paths (or more).

I read two great Young Adult book recently that perfectly illustrate this point: Dark Water by Laura McNeal, which was up for the National Book Award, and When the Whistle Blows by Fran Cannon Slayton. The authors made totally different decisions about how to tell their stories. I need to say here that when I read books my greatest hope is to get lost in a page-turning good story, but the writer in me is always in the background thinking about how the story’s put together and what works and what doesn’t. Sometimes it can be distracting, but there you go.

Dark Water is a love story about a fifteen year old girl and an illegal Mexican immigrant boy who works on her uncle’s farm. I don’t think I can do this complicated and moving story justice. 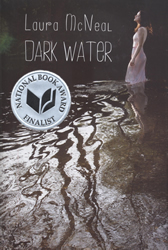 There’s lots going on between the girl and her parents who have recently divorced. The mom is quirky and depressed, working two jobs and trying to start a silkworm farm (which is weird but interesting). The dad is kind of a jerk who keeps popping in to disrupt their lives. There’s a subplot between the girl and her cousin and a strange love triangle in that family. And over all of this is the unfolding relationship between the girl and the mysterious migrant boy who can’t talk and who makes his home in a camp down by the river. What made the story more interesting to me was the point of view and structure of the book. It’s clear from the beginning that the events in the story have already happened—several years before. And that something terrible occurred that led to at least one main character's death. Usually, I don’t like books that are so clearly reminiscences, but this one works. The reader knows the book is building toward the terrible climax and will have a hard time putting it down.

When the Whistle Blows on the surface is about a boy growing up in a dying West Virginia town in the 1940’s. 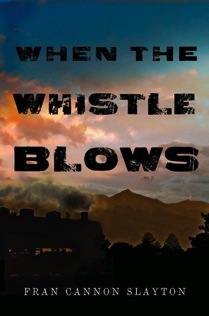 I’m not a big historical fiction fan, but I loved this book. The premise is clever and one that I haven’t seen done much at all. Each chapter is a different story that takes place on one night—Halloween—in the main character’s life. At first it seems like separate unrelated stories, but read them all and you get caught up in this boy’s life as he grows up. You get to know his friends, his family, particularly his complicated relationship with his father, and his town, which is all tied to the train, the industry the town is built around. Even though it’s what people call a “quiet” book, there was a page turning quality to it as well. I wanted to know what was going to happen to this boy each Halloween night and wondered what he was going to choose as it became clear that his childhood dream of working on the train was probably not going to come true.

So, different stories; different ways to tell them. I’m trying to keep that in mind as I plunge back into my own story. I need to remember to follow it through to the end, and if that path turns out to be the wrong one, oh well. I can always go back to the fork in the road and try again.
Posted by Jody Casella at 10:13 AM