A million years ago I heard Louis Sachar, Newbery author of one of my favorite books, Holes, speak at a conference. He started his talk by asking the audience what they thought was the most important aspect to consider when writing a book. People around me shouted out: “Characters, plot, theme!” But Sachar surprised us (or me, at least) by saying it was setting. At the time I thought of setting as background stuff, potentially boring description. Who cares where the characters are? What's important is what they're saying and doing. But Sachar went on to explain that setting is everything. In fact, in all of his books the setting is practically a character itself. Holes, for example, can’t take place anywhere except at Camp Green Lake. And his middle school series Sideways Stories at Wayside School can only happen in that bizarrely constructed school building.

I don’t know if I totally agree that setting is THE most important aspect of a book, but I definitely think it’s right up there with the other elements. Your characters can’t be floating around unmoored. They must move through a physical space somewhere. And done right a setting can come alive. Carolyn See in her writing manual Making a Literary Life talks about how certain people in our lives—the people we love or feel conflicted about or maybe even hate—family members, friends from childhood, the teacher who humiliated you in front of class in ninth grade—these people become our characters. At least variations of these people tend to show up in some form or another in the characters we create.

I think it’s the same with setting. Many of my Cicada stories take place at a college suspiciously like the one I attended. It’s the typical college campus in my head, with stone buildings and slate roofs. Sidewalks crisscrossing green lawns. An old pub in the center where they used to serve beer. The neighborhoods where my characters live are lined with the streets I walked when I was ten. There’s the park with the pond where we used to skate in the winter. There’s the patch of woods across the street I used to cut through to get to my piano lessons. The houses where my characters live are old. The kitchens are small. The bedrooms look out over the backyard. There is always an entryway where a mirror hangs on the wall.

I’m glad I’ve lived in several places over the years. And I’m glad I’ve moved away from them. Somehow you can see a place more clearly after you’ve left it. I’m not sure I could write about a place I’ve never been.

But maybe that’s not true. Just as the characters I’ve created are not totally based on people I’ve known, the settings I’ve plopped them into aren’t actually places where I’ve lived either. True, there might be a patch of woods across the street, but my pretend woods stretch on for miles. There’s a cave like the one I stumbled through near the Natural Bridge in Kentucky, the one where I almost had a panic attack in total darkness worrying that my kids would fall into an unseen crevice. There’s a stream that rushes along like the one that borders the town where I live now, but it’s also shallow in spots, like the one I tromped through at girl scout camp when I was twelve.

I just read a great YA novel that takes place in Paris, Anna and the French Kiss by Stephanie Perkins. 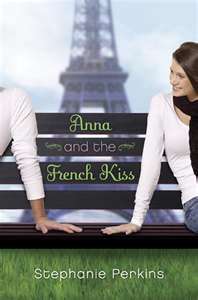 It’s a sweet, angsty romance about a girl who’s sent to finish her senior year at an American boarding school in Paris. The girl is funny and clever, a want-to-be film critic who’s floundering at first with the language and culture and missing the goings on at home. The boy is half British and cute and afraid of heights. But it’s Paris that is the third character in this story. I heard that the author never visited the city before she wrote the book, which is just amazing to me. Of course, I’ve never been to Paris, so maybe she got some details wrong. Somehow I don’t think so.

That’s one of the cool things about being a writer. You get to use your imagination to create a world. Whether it is a real place or one that just feels like it should be.
Posted by Jody Casella at 12:52 PM