First, let me say that I am an adult who loves books for teens. I don’t know if this means that somewhere, maybe not very deep inside, I still am a teen at heart. (Okay. Yikes.) But I do write for teens. I used to teach them. (Although it’s probably debatable that real, useful information was actually transmitted from me to them.) One thing I do know for sure is that I love books about them.

Books for teens are faster paced. There’s a story at the heart of them, something that makes you want to keep turning the pages but at the same time makes you wish the world of the book wouldn’t end. The characters are faced with big problems, but the problems are believable and solvable in the end. There’s a real emotional core in many teen books. I will admit that I have cried reading some of them. There have only been a few adult books that have done that to me.

So, if you know someone who is a teen, or if you want to reconnect with your inner teen, or if you just want a good book to read on an airplane, here is a list of my favorite books from the past few months: (In no particular order)

1. Before I Fall by Lauren Oliver. Mean Girls meets Ground Hogs Day. The main character goes about a normal day, which for her means hanging with the popular girls, dating a jerk, cheating on a quiz, and drinking too much at a party. At the end of the day, she dies. So that’s surprising. But even more surprising, she wakes up and the day begins again. And again. And again. Somewhere along the way, she realizes that she isn’t a very nice person. What was interesting to me about this book was how much I was rooting for this bitch of girl to figure her life out and make things right.

2. Delirium also by Lauren Oliver. I want to do a shout out to Lauren Oliver here for writing two really good, very different books. I heard she is young (like still in her twenties) and I am totally envious of her talent. If she’s churning out books like this now, then she is on her way to being a powerhouse of YA literature. So, Delirium is one of those Post-Apocalyptic, Dystopian, Futuristic, Orwellian books that’s so popular right now. But with a twist. In this one, love is considered a disease that must be eradicated. The main character buys into this concept until a few months before her “procedure” when she meets a boy and falls in love.

3. Across the Universe by Beth Revis. Also dystopian fiction. The narrative goes back and forth between a boy and a girl. The boy is the soon to be leader of a strange spaceship allegedly heading to a better world. The girl has been cryogenically frozen for the future and accidentally woken up. Cool side note: this book appeals to both boys and girls (my 13 year old daughter and 17 year old son both read it and loved it. The key to selling them on it was the reversible cover. For the girls—it’s a romantic kissing shot. For the boys—it’s the blueprint of the spaceship.) Lots of interesting things to say about what it takes to be a leader, what it means to be normal, and the price a society will pay to survive.

4. Bruiser by Neal Shusterman. Girl meets boy. Brother hates boy. Boy has some strange powers. Girl and brother find themselves sucked into strange boy’s world. Lots of clever details. Funny and alternately horrifying. The mystery will suck you in and before you know it, you’ll be gasping out loud.

5. If I Stay by Gail Forman. This book was the focus of a glowing review on NPR recently, which is why I picked it up. Main character is in a car accident that kills her entire family and leaves her hovering in a coma between life and death. The characters are real and quirky and funny. (Hippy-ish parents. On the verge, rock star boyfriend.) Okay, I cried multiple times reading this book. And it has stayed with me. Apparently it has stayed with other people too, including the author, because she wrote a sequel, Where She Went, which is told from the point of view of the now famous rocker boyfriend. Here is a rare thing in the book world: I think the sequel was better than the original.

6. Stay by Deb Caletti. Yikes. I was chewing my fingernails through this one. Story goes back and forth between the present and the past. In the present a girl and her father are basically on the run from the girl’s stalker ex-boyfriend. In the past, we get to see how that relationship developed and twisted. Eventually the two narratives collide and you know the guy is going to find them. I loved this book. Somehow it was funny in places. And so real and believable. You LIKE the guy at the beginning, just like the girl does, before his dark side is exposed. There’s so much in here about love and obsession and guilt. Plus, there’s an added mystery where the girl discovers a secret about her parents’ relationship, a lie that her father has kept from her all these years. 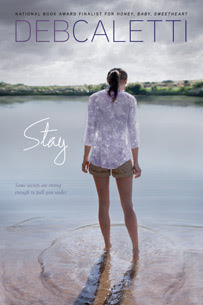 A side note for the handful of people who took my book club challenge: (We’re reading The Magician’s Assistant by Ann Patchett, On Beauty by Zadie Smith and Evidence of Things Unseen by Marianne Wiggins) I’ve read The Magician’s Assistant and loved it. But I am embarrassed to say that I didn’t quite get the ending. In fact, I came to the end and turned the page, thinking there had to be another page. Have I read so many children’s books that I’ve forgotten how to read a piece of adult literary fiction? I don’t know. But please please, someone else read this book, so we can talk about it….
Posted by Jody Casella at 2:11 PM