No Words. Or--Why every once in a while it's okay to take a vacation from writing


I used to be afraid to take a day off. Five years ago, when I began writing seriously, I discovered an essential thing about myself: I must write every day.

Before that it had been hit or miss. A long day of writing followed by a week off doing other things, some of which were important—raising children, for example. And others—scrolling around online, watching mindless TV, lunching and coffee-ing with friends were uh, less so. (I once spent an ENTIRE day in a coffee shop chatting with a friend. Yes, I am talking about you, Cindy Crane! I dropped my kids off at school and met her at the Starbucks around the corner and we parked it there until it was time to pick the kids up. Seven hours later. Side note: I am not saying that maintaining friendships is a waste of time. But I am saying that if you are serious about writing, you will make it a priority. Over pretty much everything. Another thing I had to learn about myself over the past few years—and am still learning—is how to balance my writing with other important aspects of life. IE. My husband. My children. But this is a topic for another post.

Back to this one. My old way of “working”--writing here and there when I could squeeze it in—just did not cut it. I remember writing the first draft of a novel for an entire year, a day or two a week. Most of that time was spent rereading what I’d written the week before and trying to get my head back into it. When you write every day, even if it is only for an hour, I promise you, your head is always IN it. (Here’s a helpful writing trick: stop your day’s writing in the middle of a sentence. Next day, you simply finish the thought and go.)

Once I’d figured out this essential thing about myself, it became a Rule. Write a certain number of words a day. Or, when I am revising: rework a certain number of pages. I can’t think of a time in the last five years that I failed to meet a goal I’d set for myself. And believe me, there were days when I was chewing my fingernails, locked up in my office, sweating it out still in my pajamas at ten pm..

Let’s just say, it’s a tad difficult to turn whatever this is off.

But I have. When life intervenes. Over holidays, for example. Or the week of my son’s graduation. But even during these times, I usually steal away to journal. Or blog.

Last week, though, I went on a family vacation and for nine days I did not tap a key on my keyboard or pick up a pen. Instead, I caught up with friends (my best writing friend and her family who hosted us at their glorious beach house on the Outer Banks and then with the people we call our chosen family, whom we’ve been vacationing with for years.) Hubby and kids and I had a great time hanging out with everyone on the beach. Also boating, swimming, eating enormous amounts of food, reading books, watching the Olympics, shopping, doing puzzles, talking, and napping. We hit the local touristy sites: tramped around Jockey’s Ridge, toured the Wright Brothers Museum, saw the outdoor play The Lost Colony, and checked out several lighthouses. We also fought the elements and stretched our creative engineering muscles in our quest to keep a cheap tarp standing after the wind basically blew it down on Day Two. But the biggest highlight of all was our annual Mothers vs Fathers Iron Chef competition.

Background info: the kids (six ravenous teens) pick the food item and the parents compete to prepare the most delectable/creative/visually appealing appetizers, entrees, and desserts with said food item. Shockingly, the mothers have NEVER won this competition. We think it is because the kids pity the fathers and that is the story we are sticking with. This year the food item was bacon. The mothers made bacon wrapped filet mignons and wedge salad drizzled with ranch dressing and sprinkled with chunks of maple infused bacon, which in any world besides this one would give us the edge. The fathers threw together cheesy bacon fries and that pretty much cinched it for them. Even their lame, Store-bought Cheese Danish with a Strip of Bacon Plastered Upon It did not deter the kid judges. But I will mention here that the other family’s visiting French foreign exchange student was totally pro-Team Mothers, and I for one feel that her sophisticated French palate trumps all. In her blog of the trip, which we google-translated, she mentioned with confusion the father’s sad attempt at dessert. Also what she called "a kind of pie made of cheese and potatoes.” (Which begs the question: do they have French fries in France?)

Anyway, it was a wonderful nine days. Sometimes you have to give your brain a rest. Revel in the moment. Soak up the sun. Enjoy the kids as they grow before your eyes. Eat bad-for-you food. Argue (kindly) about politics and religion and fastfood restaurants in the news lately that Shall Not Be Named (ahem. Chik-fil-a). Then sit later on the beach and clink plastic cups of wine and toast to the best friends in the world. Nights, a line or two of dialogue from a novel you haven't even been thinking about consciously may flicker in your mind. But you won't write it down on a scrap of a receipt in your purse. You'll remember to work on that later when you get home.

Because you're a writer, whether or not you happen to be writing. And sometimes it is okay--maybe even good--for you to (once in a while) take a nine-day break. 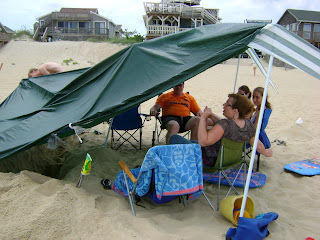 (Somehow this tarp is still holding on Day Four. Note the hole the boys dug on the left side in case more people want to squeeze in.) 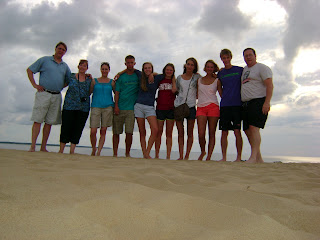 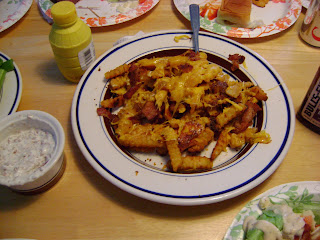