Ah, the Joy of Playing around with a Messy First Draft

I used to hate revising. In school I wrote papers the night before. Revising, in my mind, meant looking over the spelling before turning a paper in. In college when I took creative writing workshops, I still didn't understand revision. I'd write my stories in a burst (typically, the night before).

There'd be talk in class about what could be done to make a story better. "In the revision, you could try this," the professor would suggest. "Or you might think about this." I'd nod and take notes, but I never bothered to try any of those suggestions. To me, the story was done. I was bored with it and ready to move on. Maybe I'd apply what I learned to the next story I had to write.

I didn't truly understand revision until I heard a talk about it at a writer's conference. The speaker, a guy named Andy Gutelle, pointed out that many beginning writers struggle with revision. They have their finished draft in front of them, and they start from page one and edit along, tightening up passages or cutting a few things, fixing punctuation and typos. But this isn't really revision, he said.

Revision begins by looking at the entire novel at once. It asks big questions like:

He suggested revising in layers. Read through the book asking the big questions and then read through it again, zeroing in at the scene level, and finally at the smaller sentence by sentence level.

I had never thought about revision in this way. I was used to writing short stories, where I could hold the entire picture of the narrative arc in my head at once. Scene, scene, scene. Character, conflict, realization.

I had never done that with a novel. It's too big! But it made sense. Writing a first draft is often an exercise in discovering what it is you are writing about in the first place. Your initial idea can change a little or a lot. Characters that seemed important disappear. New characters emerge. Strands and subplots fade away. Revelations plop in out of nowhere.

Starting from the beginning and zeroing in on grammar errors is not going to help you get your novel into shape. To do that, you have to see what you actually have on the page (as opposed to the initial vision of the book that you hold in your head).

It's not a pleasant experience to read your first draft through for the first time. The fear going into it is that it's going to be a horrible, unfixable mess. What ends up happening, I'm happy to tell you, is that it IS kind of a mess, but it is fixable.

If it makes you feel any better, other writers go through this too:

"All writing," says Jane Yolen, "is about the gap--no that chasm--between the expectation and final product. Expect it, sidestep it, move on."

How do you DO revision, though? How do you take a big thing like a novel and see it for what it is--all the characters and strands and scenes and meanderings?

Anne Lamott in Bird by Bird describes printing out every page of a draft and spreading it all over her apartment.

Other writers write out their scenes on index cards.


They write on their walls.


Revising is like doing a puzzle. With your first draft complete, you've got most of the pieces out of the box and spread out on the table. You turn them over, examine what you have and think about how they might fit together. You chuck out the pieces that don't seem to belong to this puzzle. You assemble and realize which pieces are missing.

Uh oh. A character disappears? I'll rewrite the scenes at the beginning and take her out. A sub plot begins on page 100? Let's see if I can work that in earlier.

This can be fun or painstaking, angsty or exciting, depending on how you look at it. It takes time and work to put together a puzzle. Also, unfortunately, they don't come already assembled.

This is the truth about the work that is involved in writing a novel. It takes time. It takes logical thinking. It takes leaps of faith.

I heard David Wiesner speak at a conference this summer. He's an author/illustrator who's known for his award winning picture books Tuesday, Flostam, and Art & Max. He told us about his latest book, tracing the steps he went through from idea to development to revision. It was fascinating.

One day, he said, a very cool idea popped into his head. It was an image of a tiny spaceship landing in a child's sandbox. He immediately drew the picture and began to storyboard out the story arc. He showed us the sample and it seemed pretty good to me, but Wiesner said it wasn't right.

He quit on it again. He wrote other things. During a break he watched his cat not play with his toys. He wondered what a cat would do if he found a tiny spaceship. He drew out another story board. That story, after multiple revisions, became Mr. Wuffles.

Check it out. It's clever and hilarious. It came to be because David Wiesner did not give up on his story. He let go of the original idea and took a leap of faith.

His parting words: Don't just think about an idea. Do the work. 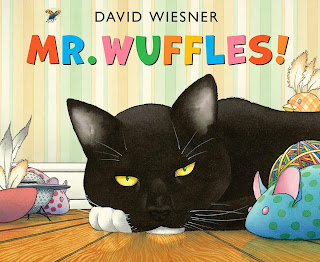 PS. Anyone who would like my notes from Andy Gutelle's revision talk, email me at jodycasella (@) yahoo (.) com