I'm so excited to feature Mary Cronk Farrell, the author of the new book Pure Grit: How American World War II Nurses Survived Battle and Prison Camp in the Pacific on my blog today. I recently read the book and I was blown away by it. 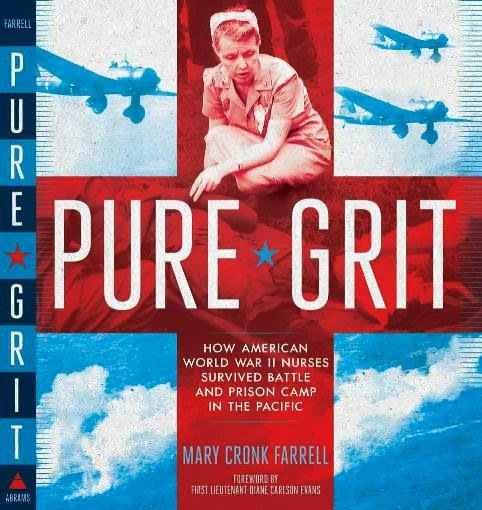 The story is riveting--horrifying, heartbreaking, and somehow inspirational. And all the more so because it is true. What these women went through is incredible and how they managed to do their jobs during their captivity is even more amazing.

I've never tried to write non-fiction (unless you count this blog), but I am fascinated by the process. Here's Mary's take on some of the research-gathering involved in writing non-fiction:

In writing a true story about events in history, the writer’s task is to recreate a world, bring alive not only long-passed people, but an environment that may have completely disappeared. That was my challenge in writing PURE GRIT: HOW AMERICAN WORLD WAR II NURSES SURVIVED BATTLE AND PRISON CAMP IN THE PACIFIC.

I needed to recreate a number of different worlds for this book, none of which I had ever experienced myself. How would I make the sights and sounds of a combat hospital realistic? Where would I discover the smells of a tropical jungle? How could I imagine the feelings running through a person’s body as she realizes shrapnel is flying around her, or a machine gun is firing from a fighter plane over head? Would my own feelings of hunger translate to the starvation experienced by prisoners of war, or my knowledge of loneliness come anywhere near that of a person who cannot know she will ever see loved ones again?

To find the details necessary to bring a story to life, I turned to personal accounts such as diaries, letters and historical documents. In the case of the American military nurses in my book, the historical record was rich with possibility.

From a 2003, Fort Worth Star-Telegram newspaper interview I learned about one nurse’s motivation for joining the Army Nurse Corp:  “Hattie Brantley had always craved adventure. She didn't want her mother's life as a farm wife with half a dozen kids pulling at her skirt while she washed and cleaned and hoed the garden.”

Initially, I studied books written by the nurses themselves, two of which had been published shortly after the end of World War II. I also found a book written by a doctor who served with the nurses, a civilian nurse who was there and a missionary woman. From Barbed-Wire Surgeon, by Alfred A. Weinstein, M.D. I gained details like this:

“Sounds familiar to the operating pavilion vibrated through the air: the zzz-zzz-zzz of a saw as it cut through bone, the rasp of a file as the freshly cut end, dripping with red marrow, was ground smooth, the plop of an amputated leg dropping into a bucket, the grind of a rounded burr drill easing its way through a skull, the tap, tap, tap, of a mallet on a chisel gouging out a shell fragment deeply imbedded in bone, the hiss of the sterilizer blowing off steam, the soft patter of nurses’ feet scurrying back and forth…”

Some POW nurses had been interviewed for posterity by the Army Nurse Corp and the Department of Defense. These would be my primary sources, but they were not so easily found. The U.S. Army Office of Medical History was moving from the east coast to Fort Sam Houston, Texas, and the documents I needed were boxed up somewhere, nobody seemed quite sure where. It was about two years before I found the oral recordings and their transcriptions. Here’s a typical quote from these interviews. Army Nurse Helen Cassini described the dusty conditions in the tunnel hospital on Corregidor:

“We had no air conditioning of course. And we even had to wear masks--wet masks in order to breathe. We would take gauze and wet it, put it over the patients'--mouths in order for them to breathe a little bit more comfortably. When the shelling and bombing would occur, it was even worse because the dust, the little stones would just fall down through the cracks and cover everything.”

Archived at the Women in Military Service to America Foundation, I found notes from an interview with Navy Nurse Margaret Nash who had been imprisoned at Los Ban᷈os Internment Camp in a rural area some distance from Manila.

“Our menu was interesting. Have you ever tasted wall paper paste? Well, that’s what we had for breakfast, weevils and all. It was called lugao. They would give us milk for it and if you were lucky you’d get a banana. The second of our two meals a day was a stew of all native vegetables….We had no meat, no protein of any kind, and that’s why there was so much beriberi and malnutrition.”


I resorted to secondary sources when I couldn’t track down the original, if the bit of information seem seemed imperative to recreating an experience. For instance information on the feelings associated with starvation which I learned from a newspaper quote cited in the book All this Hell: U.S. Nurses Imprisoned by the Japanese (Mohahan & Neidel-Greenlee, University of Kentucky Press, 2003).

“Hunger makes one constantly dizzy and causes a severe basal headache that never leaves…I had been without vitamins for so long I could not read a line of print. The letters swam together.”

And similarly, the feeling of homecoming after three-years in POW camp.

“A few minutes later, the dramatic moment of the whole trip arrived when Lieutenant [Margaret] Nash…sighted her mother on the porch.
“Mother! Mother!’ she exclaimed with outstretched arms and tears rolling down her cheeks. It was only a matter of seconds until she was in her mother’s arms.”

Once a writer discovers details like this, all that’s left is weaving them seamlessly together into a narrative.

Mary Cronk Farrell is an award-winning author of Children's/YA books and former journalist with a passion for stories about people facing great adversity with courage. Her books have been named Notable Social Studies Book for Young People, SPUR Award for Best Juvenile Fiction about the American West, Bank Street College List of Best Children's Books, and NY Public Library Best Books for Teens. For more information on Mary and her books see: MaryCronkFarrell.net

Pure Grit is available on Amazon, Barnes & Noble, and at indie bookstores.