The Book Tour Road Part 2: In Which I Drink Mark Zuckerberg's Smoothies, Discover a Glorious Mountain Retreat, and Channel My Italian Grandmother

My son and I have had some weird parallel and intersecting life-moments over the past few years.

While I was slogging angstily through my book submission process, he was going through his college application process. (side note: HIS process was not as angsty or long, although at the time, he disagreed with me-- a handful of months vs. my...um...15+ years. Come ON.)

We snagged our acceptances during the same month. Then he went off to school and I embarked on my debut book year.

A few weeks ago our lives intersected again. He landed his dream internship at Facebook around the same time I was invited on Simon & Schuster's group author tour through California. Last stop: Menlo Park, the home of Facebook.

There was a little bit of finagling behind the scenes to work it out, but the other authors on the tour, Suzanne Young, Sarah Ockler, and C.J. Flood (and our awesome driver Dolores) were as eager to see Facebook as I was. Sarah's new book #Scandal is about social media-- (Main character Lucy agrees to go to the prom with her best friend's boyfriend and it blows up in her face in a big way all over Facebook.)--so she was über excited to sneak a peek behind the FB curtain. 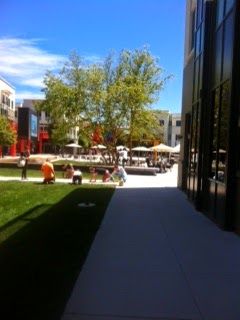 I hadn't seen my son much lately (only two days home between college and before he took off for CA), so I was über excited to see him, but trying to keep my loopy mom persona tamped down so as not to humiliate him on the job.

Facebook was something else. I don't even know how to describe it. Disney World for adult computer fanatics? Utopian Under the Dome community? From the parking lot, the place looks like a normal set of office buildings, but then you step through to the Other Side and you're sauntering down an outdoor main street, with restaurants and shops and people kneeling on the sidewalk marking it up with colored chalk.

There's a movie screen. And a smoothie shop. The smoothies and the food are there for the taking.

My son enjoyed giving us a tour. Mostly, this consisted of pointing out the various food options at Facebook. He typically chooses the BBQ but consented to eat at the Ramadan buffet with us because there were vegetarian selections. Casually, he mentioned where Mark Zuckerberg's office was--ahead, behind a wall of glass. "Sometimes he's sitting in there," he said.

We were not allowed to take his picture, I am sorry to say. My son was adamant about that, but in case we didn't get the point, there was a helpful sign taped over Mark's head on the glass window that said: "Please Do Not Take Pictures of the Animals."

We took other pictures though. 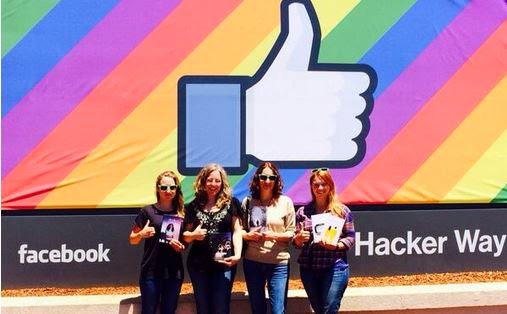 I kept hugging my son at odd moments. I just couldn't help myself. He looked so joyful and at home under the bright blue San Francisco sky. When it was time to leave, I almost couldn't bear it.

But the Summer Lovin' crew had another cool event scheduled for the afternoon.

Next stop: Djerassi, a retreat for artists and writers, where our friend and fellow Young Adult writer Nova Ren Suma, was leading a writing retreat for the week. The Djerassi landscape is something else too. On the top of a mountain (a perilous, windy drive that Dolores bravely navigated). Through a redwood forest. Over grasslands. With views of the Pacific Ocean in the distance. I have never seen anything like it and now have found a new goal in life: to go BACK THERE somehow and be a resident writer.

Nova was gracious to let us jump into her critique time and the writers on the retreat seemed to like picking our brains about the writing and publication process. I was sitting there in wonderment that my head contained one of the brains that people wanted to pick. That I'd just seen my beloved son. That I was on the top of a mountain somewhere in California. That I was on a freaking BOOK TOUR.

That night we did our last book signing event at Kepler's Bookstore in Menlo Park. My son came with his friend and I just kept looking at him in the audience, fighting the urge to jump out of my seat like a loon and go hug him.

It occurs to me now as I write this that I may be more like my Italian grandmother than I ever realized. She was an amazing cook and housekeeper (who took housekeeping to new levels)

She was also a hugger. Whenever I'd go visit her, we'd be sitting and chatting (about various methods of making spaghetti sauce or cleaning house) and suddenly she'd hop out of her chair and hug me.

I thought it was sweet. But kinda weird.

Now, I totally get it. 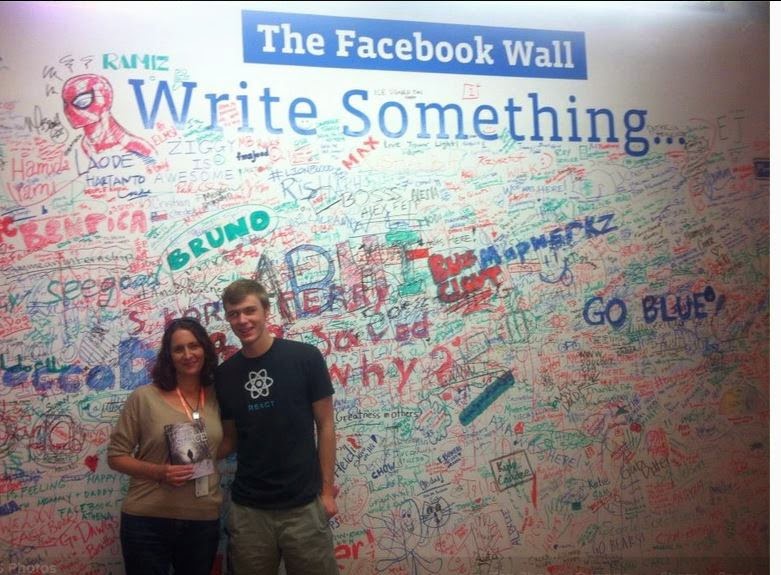 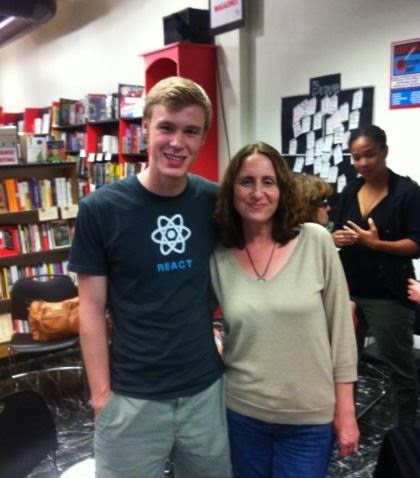