In Which I Confess My Love for Emily Dickinson. Plus: a Shout Out to a Great New Book

I'm ashamed to admit that once upon a time I didn't think much of Emily Dickinson.

When I was in high school, I may have glanced at a poem or two. They seemed like sappy things about nature or unrequited love. Bluh is what I thought. And that mousy author photo, the one they always stick in English textbooks-- bluh to that too.

Fun fact about that photo: Emily hated it. It was taken when she was seventeen and she'd been sick for a few months when she posed for it. She didn't think it represented what she looked like at all. Which is cruddy because that picture was THE only verified photo of her in existence until a second one was rediscovered in 2012: 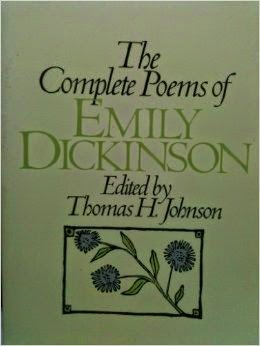 Shameful confession: I complained to my writing professor about this present. Yes. My face is red as I write this. Jeez. I said. Or something along these lines. I get that the stodgy old white male department head wanted to give me something authored by a woman, but did it have to be barfy Emily Dickinson? I mean, come on. Get with the 20th century. Hello. Ever hear of Sylvia Plath?

I thought my cool writing prof would agree. Instead he shocked me by chewing me out. He was one who'd chosen the book, he said. And nothing against Sylvia Plath, but maybe it was time for me to take another look at Emily Dickinson. She was not barfy. In fact he viewed her as one of the two poets, along with Walt Whitman, who'd ushered in the modern poetry era, and if I didn't know that, then maybe he'd failed me as a teacher.

I read The Complete Poems of Emily Dickinson. I fell in love.

Did you know that ED wrote nearly two thousand poems, scrawling them out on bits of paper or including them in letters to friends and family? She never married and in the final twenty years of her life, she dressed only in white and secluded herself in her bedroom, rarely coming downstairs; although she is rumored to have shared gingerbread with neighborhood children by lowering it in a basket from her window...

Sure, her poems on the surface might be about nature or unrequited love, but there's a lot more to those seemingly dashed off lines. Take another look and you'll find stuff that's philosophical and achingly curious and even funny.

When I taught high school English, I loved talking ED with my students. One thing I held back until the very end of the Emily Dickinson unit is that most of her poems are written in hymn meter, which means that the lines alternate between eight and six syllables. Yeah yeah, whatever, Ms. Casella, my students would say, until I told them that the poems could be sung to the tune of any song written in that meter.

Example: "Amazing Grace" or the "I Like to Teach the World to Sing" Coca Cola song.

For extra credit I let the students sing and they always had a grand old time.

Here. Try it for yourselves.

Because I could not stop for Death--
He kindly stopped for me--
The Carriage held but just Ourselves--
And Immortality...


Or how about this?

Okay. That is enough playtime, class.

Maybe you are wondering why I am thinking about Emily Dickinson today.

Because I just finished reading the most brilliant and beautiful book, Death, Dickinson, and the Demented Life of Frenchie Garcia by Jenny Torres Sanchez.

Main Character Frenchie Garcia has recently graduated from high school and she's lost and depressed. She didn't get into the art college of her choice. Her best friend has a new girlfriend and isn't paying Frenchie much attention. She has a morbid hobby: watching funeral processions drive by her house on the way to a nearby cemetery. Sometimes she follows them inside the cemetery and sits by the grave of Emily Dickinson. (This is Orlando, so it's not the real Emily Dickinson's grave, but Frenchie kinda likes the idea that someone named Emily Dickinson is buried there.)

Frenchie's real problem, though, isn't revealed immediately. It turns out that a few months earlier Andy Cooper, a guy Frenchie secretly crushed on for years, had singled her out to have a "night of adventure," and the next morning he killed himself.

Now Frenchie's trying to come to grips with what really happened that night, and she's doing it by recreating the adventure with someone else. 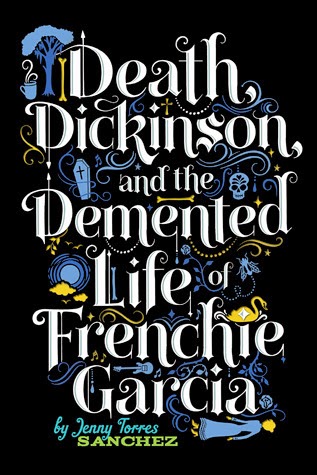