Yesterday I got metaphorically booted out of a government building.

I was sorta flabbergasted. I've never been asked to leave a place in my life.

The guy-- a security guard at the Ohio Department of Education--was totally nice about it. A few minutes before we'd been sharing a laugh, so when he told me to leave--and not just leave the building but stay off the entire property and make sure I was standing on the sidewalk, and not blocking the stairs or the street--I thought he was joking.

I walked outside, stunned, and stood on the sidewalk, making sure I did not block the stairs or the street, and feeling weird and, okay, outraged.

I was too early, is what the problem boiled down to, and when you're participating in a rally, apparently, you need to be on time and not expect to sit in the lobby of the Ohio Dept. of Education while you wait.

It all worked out in the end. As rallies go, this one was pretty mild. A few protest signs. Speeches and chants. All of us crammed in on the sidewalk clear of the stairs. Moms. Dads. Kids. Teachers. A cool group of nurses.

I guess I should tell you what this raucous protest rally was all about. This week the Ohio Board of Ed is voting on a measure that could potentially put discretionary positions such as P.E. teachers, art and music teachers, librarians, nurses, and guidance counselors on the chopping block. The way things stand currently in Ohio, schools must have 5 out of 8 of these positions per 1000 students.

Money's tight in Ohio. The state's cut money to the schools, and the schools are doing what they can to deal with the loss of state support, which includes raising taxes and cutting jobs. But their hands are (fortunately) tied by the 5 of 8 Rule.

Now some school board members, in the guise of giving local school districts "freedom," propose doing away with the 5 of 8 standard. They say it won't lead to the loss of discretionary positions (which some have called luxuries), but, come on. Who are we kidding here?

The sad truth is that wealthier districts will find a way to keep art and music and librarians in their schools, while other districts--and children in those districts--are going to lose out.

A mom talking about how the arts helped her child. A child talking about her ADD and how much being in the theater made a difference. A guidance counselor speaking about kids in crisis. A college student describing how music made him what he is.

My friend Susan Yutzey, a retired librarian and president of the Ohio school librarians, spoke about how kids need help more than ever in analyzing and understanding the vast amount of information they are bombarded with each day. I spoke about how librarians saved my life and about how I've seen first hand what districts look like without librarians--

--and places where the libraries are the heart and safe haven in the schools and what a difference that makes to children (and, okay, if you're concerned about fff-ing test scores, I'll tell you a secret: a librarian in your school will help ya' out there too.)

The speaker that made me cry was one of the school nurses, when she talked about saving a child's life. Literally.

The news came. The little kids held the protest signs-- tombstones. We all chanted "Keep 5 of 8." 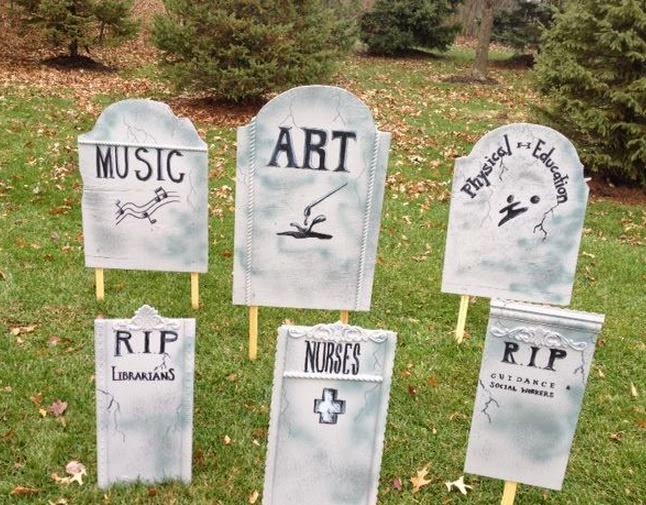 No one got arrested or burned anything down.

But then again, no one really pushed us-- a group of mostly white middle aged middle class parents and little kids. Our outrage is of the white middle aged middle class parent variety-- frustration and sadness to think that our elected representatives are making poor decisions that will have real effects on what happens in our children's lives-- Will they be able to play sports? Will they have a librarian in their school who knows their names and what books they like to read? Will they have a guidance counselor to help them cope with bullying? Will they be able to play in an orchestra or act in a play?

--and not the kind of outrage that I can only imagine you'd feel when, say, for example, your child is shot to death by someone in a position of authority.

Once upon a time, I was a child growing up in poverty in a single-parent home. One year we did not have a car. One summer we lived in a tent at a campground. There was a death in my family. And violence. The course of my life was set on a certain trajectory.

But I went to good schools filled with "luxuries," schools where there were teachers who cared about me, librarians who knew my name and put books into my hands. I was exposed to music and art and (even though I didn't like it much) P.E. I had a great guidance counselor who walked me through the college application process.

And I was nudged onto a different path from the one seemingly set in the beginning. 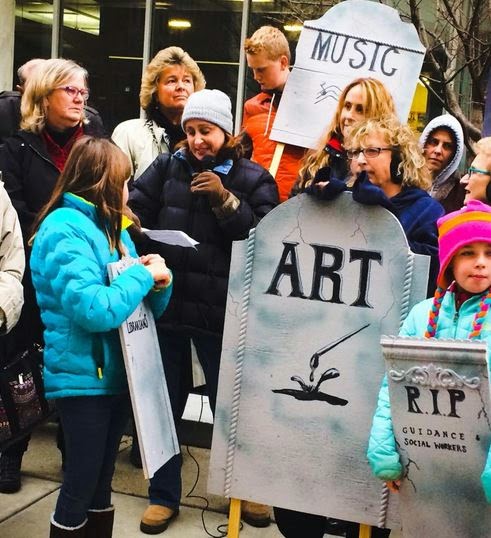