I took a poetry translation class in graduate school. It was a requirement for my degree program that students demonstrate fluency in a foreign language.

The problem was I didn't have a fluency in a foreign language.

When I was in high school I took four years of Latin but I graduated unable to write or understand much of Latin beyond veni vidi vici. (For the record, that means "I came. I saw. I conquered." and supposedly Julius Caesar said it after he came and saw and conquered something.)

For my undergraduate degree there was a foreign language requirement too. The college would waive the requirement if you passed a language test. Since I'd had four years of Latin, the college signed me up to take the test. I panicked. There was no way in hell I was going to pass. I would flunk at an embarrassing level and probably my acceptance to the college would be revoked.

My only option was to take another language. I signed up for Spanish, which seemed like a more useful and practical language to know than Latin. This time around I was determined to learn the language. I took five semesters and spent a lot of time  memorizing vocabulary words and verb endings, but I would not have called myself fluent.

My definition of fluent is that when you go on your honeymoon to a Spanish-speaking country, you ask for directions to the bathroom and the old guy who is selling ceramic cups directs you to the bathroom, instead of nodding and squinting at you... and handing you a ceramic cup.

Which is how I ended up in the poetry translation class in graduate school.

This seems funny to me now. I couldn't ask where the baño was, and yet, I was going to prove my fluency by translating Spanish poetry into English.

What I learned in my poetry translation class is that the act of translation is difficult even when you are fluent in both languages. The translator has to take into account all kinds of things we don't normally think about as readers. She's not doing word for word translation, which is how beginners in a foreign language think about translation. She has to make choices.

If a poem is written in rhyme, for example, should the translator keep that aspect-- even if that means something else will be lost? Words in poems are specifically chosen by the poet. Often they have double or triple meanings. How can the translator ensure that the translated poem works on all of the same levels as the original poem?

I can assure you that I got it wrong in my poetry translation class. I did my assignments with my Spanish-to-English dictionary splayed out in front of me. I knew it was a hopeless, futile endeavor because I could barely read the poem, much less understand the subtle variations of meanings, the rhythm, the evocation of imagery.

I never looked at translation the same way after taking that class. I know that no translation of a piece of literature is perfect. But I also know that without the translation, the piece would not be available to many readers at all.

I never reached fluency in Spanish, but I got a little closer to understanding it through my kids. When they were young (which is when languages are easier to learn) my husband and I enrolled them in a Spanish immersion school. Beginning on the very first day of kindergarten, their native Spanish language teacher, spoke to them only in Spanish. 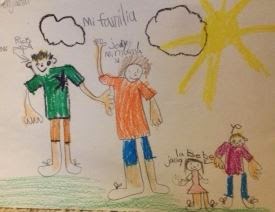 Some days after I'd dropped them off, I'd linger in the doorway for a few minutes and listen to the teacher speaking. She stood in front of the class and jumped around a lot, pantomiming what she was saying, talking slowly, singing songs, repeating words and phrases over and over.

The students jumped around too, mimicking the teacher's movements, singing, dancing, repeating what she said.

It seemed like a fun way to learn a language.

Also, they learned very quickly how to ask to go to the bathroom.