Sucking the Marrow Out of Life. Sorta.

Last week I rode a bike for the first time in twelve years. My husband had been trying to talk me into it for a while but I was kinda meh about it.

Husband: I'm thinking about fixing up the bikes.

Husband: So we can ride them.

Then I went back to reading or writing or sweating it out in the garden-- my usual activities--and my husband drifted away, and unbeknownst to me, began fixing up the bikes.

His plan was to cart the bikes--and the two of us-- down to the river at the edge of our town and try out the bike trail that winds along the shore. He was hefting the bikes into the back of our truck when he told me this plan.

I thought it might be a good idea if I got onto one of the bikes first and maybe, um, see if I remembered how to actually ride. I felt like a doofball climbing on. Pedaling. Clutching the handle bars. I rode up the street and back, tentatively, and a little wobbily at first, but then a little faster. I came to the end of the street and wondered if I could handle the turn.

I could handle the car coming at me too. And the slight hill of the driveway.

Apparently, the saying: "You never forget how to ride a bike" is true.

Still, I felt a little anxious biking along the river trail. There were actual legit-looking bike-riders down there. Also, joggers and speedwalkers. People fishing. Boaters...

Huh. Who knew so many people hung out by that river?

The hills were more hilly than I'd realized. It was blindingly sunny by the water. My bike is low tech with only one speed so I wasn't prepared for how much serious leg-pumping I'd have to do. Also, my wrists hurt from gripping the handle bars. At one point I came up alongside a jogger and found too late that I should've been pushing myself harder. I was never going to make it past her up the hill. I burst out laughing as we--the jogger, and me, the jittery novice biker-- moved along for a while at the same speed.

Downhill was better. I know I should've been wearing a helmet, but I loved the feeling of the wind whooshing through my hair and against my sweaty face.

By then I was feeling comfortable enough that I could take in the sights. The college crew team skimming by. Water spilling off a dam.

I had weird random thoughts. Ideas for potential stories. The realization that both of my kids are now away at school. The thudding sense of time ticking ticking ticking. This is IT. My husband and me from now on. Just the two of us. Would we settle into a quiet (boring?) groove, all of our adventures behind us? OR could this biking thing be the first chapter of a new adventure?

Because I am a nerdy former English teacher I started thinking about Henry David Thoreau and how he jolted himself out of his routine by moving into the woods. Maybe you remember him, the guy who built a small cabin near a pond and wrote a book called Walden.

Mostly Thoreau recorded his thoughts about the cabin and the beans he was growing in his garden and the ants skittering up and down a tree. But he also wrote about how it's a good idea every now and then to force yourself out of your comfort zone. Throw yourself off your normal track. Live your life deliberately.

Thoreau lived his life deliberately in his cabin for two years and two months until one morning when he woke up and saw that he'd worn a path from his door to the pond. He'd done it again. Fallen into another groove. Which meant it was time for him to pack up and leave.

Go suck the marrow out of life someplace else.

My husband and I biked for only four miles, but my legs were shaky when I climbed off the bike. We drove home and I went back to reading and writing and sweating it out in the garden.

Next week we are selling our house, giving away all of our possessions, and moving into a remote forest to build our own small cabin.

But we are thinking about possibly renting a canoe. 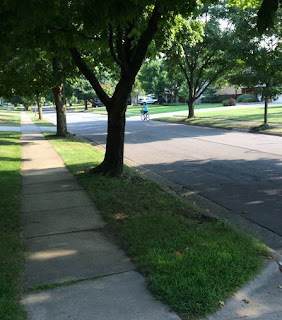 Email ThisBlogThis!Share to TwitterShare to FacebookShare to Pinterest
Labels: biking, sucking the marrow out of life, Thoreau, Walden