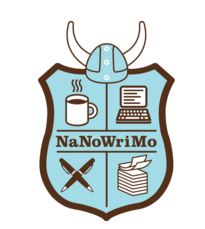 Tomorrow is November 1st, which for many writers means the official starting date of NaNoWriMo. Midnight tonight, it's an On your mark, Get set, Go, across the world as several hundred thousand writers will attempt to silence their inner critical editor voices and bang out their 50,000-word first drafts.

Fun factoid # 2: Since 1999 over 250 writers eventually went on to traditionally publish (I assume after much revision) their NaNo novels-- Rainbow Rowell's Fangirl, Sara Gruen's Water for Elephants, Erin Morgenstern's The Night Circus... oh, and my book Thin Space (the first draft of which was crazily dashed off during NaNo, 2008)

NaNo is a fun, wild, relentless, ridiculously difficult and yet freeing ride and I halfway want to do it again this year.

First, because I have just started revising a novel and, for me, revising is less about word count and more about scene work.

Also, I have a ton of other things to do. (Somehow, and I'm not sure exactly how this happened, I have nine events/presentations/writing workshops/school visits set up for this month, and now I've got to actually, um, prepare for those.)

I love the challenge-y goal aspect of NaNo though, so I have decided to craft my own NaNo-style program.

1. Revise half of a scene per
2. half of the days in November that I am not out and about presenting
3. which would get me roughly halfway through my revision

Anyone want to join me?

Pledge in the comments your Half NaNo Style Challenge, (or create whatever the heck other kind of writing goal you'd like to shoot for this month).

We'll meet back on December 1 and see how we've done.