So it might seem weird that I bought a cookbook the other day called The Joys of Jell-O. The recipes are fun. And by "fun," I mean bizarre and creepy, ranging from the expected jello molds plumped with canned fruit chunks: 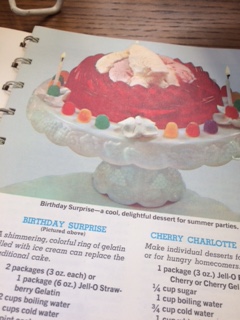 to the more, let's say, unexpected veggie and seafood molds:


If you like the sound of that, you might also want to try the "Ring Around a Tuna." Which, as the name suggests, features a lovely glistening slab of jello circling round a glop of tuna.

As absurd and disgusting as these recipes sound, I am fascinated by them. The elaborate designs. The vibrant colors not found in nature. The non-nutritive aspect of the food. Can it be called food? Did any of this taste good or was it all an elaborate prank?

A few weeks ago the New York Times Magazine's cover story was "In Search of Lost Foods." 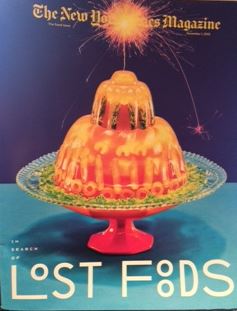 The article highlights some of the stranger recipes favored by home cooks in 1971. Loaves and molds and towers concocted by using hotdog chunks and canned everything, particularly olives, all encased in my fave, jello. It also attempts to answer the pressing question:

WHAT THE HELL WERE THESE PEOPLE THINKING??

The answer, apparently, has something to do with a postwar obsession with all things convenient and modern and space-age-looking. While the Communists suffered eating beets and boiled potatoes, Americans chowed down happily on Party Sandwich Loaves and Cherry Berries on a Cloud.

I flipped through the article somewhat smugly, thinking that I'd take the boiled potatoes and beets over what appears to be meatloaf in the shape of a fish and frosted in day glo margarine.

The next week I was surprised when the magazine printed comments from readers who were upset about the story. Sample comment: Hey! That food was good!

One of them mocked the recipes of today. Just wait, the person said. The people of tomorrow will be mocking our obsession with kale.

For the record I am obsessed with kale.

I planted way too much in my garden this year and it's pretty much taken over and is still growing, despite the cold weather. So far I have been sauteing my kale, tossing it in salads and tucking it into soups.

Now I am wondering if it's time to tear open a package of lemon-lime jello...