"Trapped in a Room with a Zombie without My Reading Glasses." A Comedy-Drama in Three Parts. 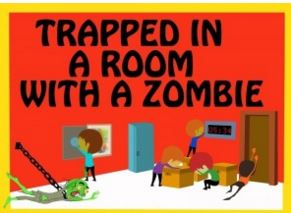 Because my husband and I wanted to buy a gift for my notoriously hard-to-buy-a-gift-for brother, and because we know he likes games and activities like laser tag, and because I'd heard a story on NPR about something called Room Adventures where participants are trapped in a room and must solve a bunch of clues to break out, and because it seemed like just the kind of thing my brother might like and our kids were home from college and we were looking for activities we could do together as a family, we bought tickets and presented them to my brother on Christmas Day.

Further bit of back story: I suddenly--and I mean suddenly--like, one day I could see small print and literally the next I could not--found myself the owner of reading glasses. Which I do not like. And resist wearing. Even though, apparently, I need to wear them.

Me
Husband
Brother
Son
Daughter
Five other participants that we did not know until we showed up at the Room Adventures place and now I don't remember any of their names except one, Marianne, who asked a lot of good questions which were not answered by our guide, the Doctor.
The Doctor
The Zombie
A guy with a weird, I guess it was supposed to be a Transylvanian? accent

We arrive at a desolate warehouse in the rain and spill out of the car making jokes about the zombie apocalypse and how if it happened, it would happen here. A guy with a weird Transylvanian accent greets us and has everyone sign a disclaimer that we won't sue them if we get hurt, trampled, and/or eaten by a zombie. We all mull around uncomfortably, eyeing the other family.

Doctor (also speaking with a weird Transylvanian accent.)  Come closer. Something something about the rules. Something something backstory about a virus and zombies. You're going to have one hour to solve the clues and break out of the room. Also, there's a chained up zombie in the room who will try to eat you. Every ten minutes his chain will release another foot.

Marianne: How long is the chain? How many clues are there? What if I have to go to the bathroom?

Doctor: (Ignoring the first two questions and reminding all of us to go the bathroom now) Is anyone here psychic?

Daughter: (pointing at me) Mom.

The Doctor opens the door and we all walk into the room.

There's no zombie in the room but there's a table in the center and the walls are lined with cabinets and drawers. Everyone spreads out and looks for clues, realizing fairly quickly that we have no idea what the hell we're doing. Daughter and I solve an easy puzzle and unlock a drawer and find a bunch of random items.

A cabinet opens and a zombie rolls out.

Everyone: (screaming and running to the other side of the room where we all stand against the wall, embarrassed.)

Son: If this was real life I'd use all of my energy to figure out a way to kill the zombie instead of solving clues.

Daughter and I work on another puzzle in the corner that has a lot of letters and codes and involves me adding up a bunch of numbers and making an addition mistake but somehow we manage to unlock a drawer and find more random things.

A timer buzzes and the zombie lunges closer.

My brother discovers that if you clap, the zombie will be distracted and other people can sneak over to the side of the room.

Everyone: (not sneaking over to the other side of the room)

Everyone: (realizing that we can't stand on one side of the room clapping for an hour)

The timer buzzes and the zombie rolls closer.

My brother gets the idea that if we all run from one side of the room to the other, the zombie will chase us around the table and wind his chain up and get stuck against the table.

Everyone: (running around the table)

Everyone: (Clapping and lamely trying to solve clues and collect more random items)

The Doctor: (making eye contact with me and using hand signals to indicate that I've got to do something important because I am wearing the headset.)

Turns out, I have to solve a clue on top of the table. Which means I have to get past the zombie and squat on the table and use my headset to do some intricate activity that the doctor tries to help me with (without talking) while everyone claps and screams and runs around the table.

I find the clue after much struggle.

Daughter: Open the lock, Mom, with the number!

Daughter: The one on the side of the table!

Everyone: (clapping and looking at me expectantly)

Me: (Leaning over the side of the table where the lock hangs. Unfortunately the zombie's bloody mouth is less than a foot away from the lock.) Damn it!

Daughter: He can't reach you!

Me: (leaning closer) (And taking the lock in my hand) (And trying to ignore the zombie mouth)

Daughter: Come on, Mom. Do it!

And this is where I realize, from my perch on the table, with the zombie mere inches away and the others in the room clapping and screaming and running around the table and still trying to figure out clues and the timer buzzing and the clock running out and the Transylvanian doctor tsking at our group's ineptitude, that this whole ridiculous thing may come down to me unlocking this lock...

and I can't see the numbers

because I am not wearing my reading glasses.

Skip to: We lost. It didn't really come down to me, I am happy to report. There were a ton of other clues that we never found and items we never figured out how to use.

The number I was trying to use in my lock weren't even the right numbers. So, Ha Ha.

But we had fun and the doctor dropped her Transylvanian accent and the zombie stood up and was suddenly an ordinary nice guy and the two of them explained all of the things we did wrong but gave our group points for effort and asked us to like them on Facebook and had us all take a group photo, and then our sweaty, stressed out group filed out into the dark rainy night, knowing, without a doubt, that if there truly was a zombie apocalypse, we would all perish.