We Are All Passengers on the Ship of Fools

By nearly all definitions of a good book, this book, Ship of Fools by Katherine Anne Porter, fails.

There is no story arc. 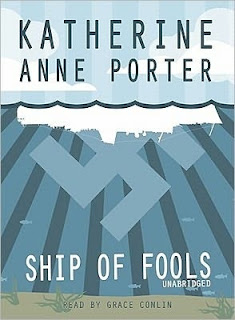 No narrative structure. No building conflict or tension. No main character to root for or care about (in fact, there are more than thirty characters!! and they are all, each and every one of them, a jerk or an idiot or both.) Nobody changes or grows or comes to even a small realization about themselves or the world.

And yet, weirdly, I found myself continuing to read about them, the fools on the ship, asking myself my own questions as I read: Would anything actually happen in this book??

I was hoping for a storm at sea. A Titanic-like sinking. Maybe a disease mowing everyone down.

Would anyone figure something out, make a decision, DO something definitive?

Here I was hoping one of them would jump off the ship. And while several did consider this option, none followed through on it.

Saddest moment of the book for me was when the two crappy kids of the crappy Spanish dance troupe grabbed a crappy couple's beloved bulldog and threw him off the ship. A man in steerage jumped in after the dog and the crappy crew lowered a lifeboat and saved the dog but weren't able to save the man from steerage and the crappy couple whose dog was saved wasn't even grateful for the man for saving their dog and losing his life in the process.


He probably did it for the reward, the crappy husband said.

There was a funeral for the hero or fool, depending on how you want to look at the dead guy, and a fight broke out in steerage and another guy was beat unconscious and all the crappy first class passengers watched from above and passed judgment.

Side note, lest anyone wonder why this book IS a book and why I read it:

The actual writing is fine (although wordy and overly descriptive in places). The book was made into a movie. It was up for a National Book Award. The writer Katherine Anne Porter was a brilliant short story writer. Her aim was to capture the lead-up to the rise of Nazism in Europe in the 1930's, and I would say, she succeeded.

There's spot on psychological shit going on in this book, a piercing and squirmy analysis of human nature--what IS it about us, as people, that make us treat each other so cruelly and disdainfully and ignorantly? And why do we notice all of the crappy qualities in other people, but never in ourselves?

I kept reading this book, out of morbid curiosity, latching on to one character or another, hoping she or he would show some moral courage or intelligence or empathy. Several came close and then blew it. One woman, Mrs. Treadwell, one of the few Americans on the ship, offered me a splinter of hope. Age 46 and on the wiser side, she had the decency to feel bad for the dead dog saver, for example.

I followed Mrs. T right up to the end, thinking, YES, here's the woman who's going to learn something, redeem herself, do something kind...

and then she nearly beat to death the scummy lecherous loser from Texas in the hallway with her shoe. 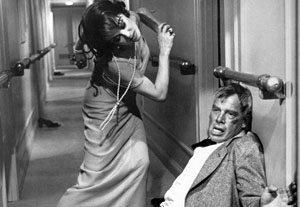 So yeah. That happened. And I am not proud to admit I sorta wanted her to kill the guy.

It took Katherine Anne Porter twenty years to write this book. In the note at the beginning she writes:

"When I began thinking about my novel, I took for my own this simple almost universal image of the ship of this world on its voyage to eternity. It is by no means new--it is very old and durable and dearly familiar... and it suits my purpose exactly. I am a passenger on this ship."

Spoiler alert: the ship finally makes it to Germany and everyone gets off and goes on with their separate miserable lives, still judging and treating each other like crap and at the same time thinking they are wonderful people themselves.

I closed the book, wishing there were an epilogue, some flash forward into the future, where I could see their silly misguided pathetic illusions crushed in the firestorm that is World War Two.

Is it foolish of me to think that I am not one of the passengers on this sad hopeless ship?