How Do I Love The Great British Bake-Off? (Let me count the ways)


1. It's a reality TV show and I typically HATE reality TV shows because they stress me out with all of the back-stabbing and cut-throat competition and snarky mean judges, but this show is NICE. The contestants are kind to each other. The judges are lovely--even when they are offering constructive criticism. And when a baker is voted off, everyone does a group hug to say goodbye.

2. It's a British show and everyone has varying degrees of English accents and you can't always understand a word they're saying, but they seem so happy and earnest when they're speaking that you just nod along in agreement. 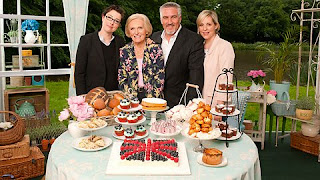 3. The FOOD. This show will make you want to bake bread and pies and elaborate multi-level cakes and pastries with layers of butter, and biscuits (which in the British lingo are more like shortbread cookies). The contestants spend a lot of time describing in great detail what they are going to bake and there is an intricate drawn out version of the dessert helpfully shown on the TV screen so the viewer can see the plan... and how it sometimes falls short, which leads to

4. DRAMA. I never realized how nail-biting it was to watch people watch their oven doors until I watched this show. There's lots of watching of oven doors. Lots of desserts flopping and collapsing and burning and melting and tossing of failed desserts into the bin, and the most dreaded of all--

5. The SOGGY BOTTOM. All Great British Bake-Off fans know immediately what I am talking about here. The soggy bottom is the thing you DO NOT want to happen to your pie crust, and somehow there is always one sad bloke looking over his pie with dismay as the judge lifts the slice up to check, and says, "Oh dear. It's got a soggy bottom now doesn't it?"

6. Oh, these judges!! They are darling. First, Mary Berry, who apparently is famous in England for her dessert cookbooks. All of the contestants bow down to Queen Mary, hoping that she will call their recipes "Scrummy." Hint to the contestants: Mary is a sucker for booze-infused puddings.

7. But you won't get far trying to manipulate the other judge, Paul Hollywood. Paul is a renowned British bread baker who plays the bad cop to Mary Berry's sweet cop, roaming around the kitchen asking the bakers what they're making and raising his eyebrows skeptically whenever he suspects a dish is going to be a disaster. The worst thing Paul can say to you is "Good luck!" When he loves your dessert, (rarely) he shakes your hand. The rest of the time he sighs sadly and says something like, "The flavors just aren't there." But even that critical pronouncement is softened by

8. the hosts, Mel and Sue. Mel and Sue introduce each episode and narrate backstories about the contestants and the recipes. They also tell silly punny jokes and walk around the kitchen trying to lick batter out of people's bowls and swipe biscuits off counters when no one is looking. They give us the lowdown on which contestants are falling behind and in danger of being voted off

10. And last but not least, the food. I have to bring it back around to the food again. I am not much of a baker, but since I have been watching this show, I have baked a scrummy coconut torte, ten perfectly formed chocolate biscotti, and one layered show-stopper cake shaped like a hamburger.

I imagine if Paul had dropped by he would've shaken my hand. 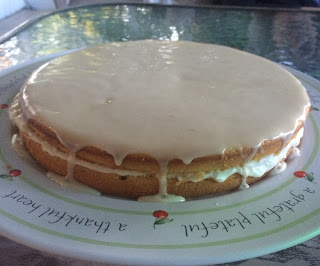 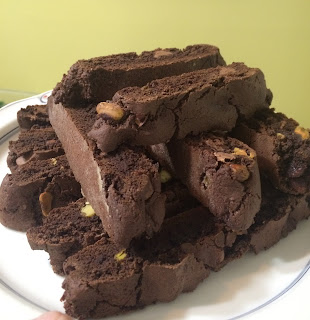 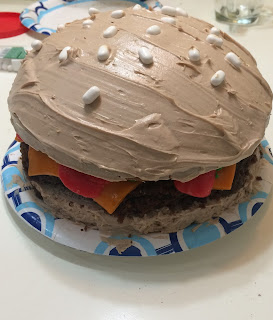