I'm so excited to host Mary Cronk Farrell On The Verge today. Mary's known for writing award-winning, thought-provoking non-fiction about subjects not often explored in children's books. The first book that put her on my radar was PURE GRIT, an eye-opening true story of a group of American nurses who were held prisoner during WWII. 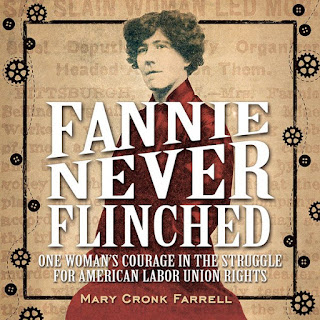 Her latest book shines a spotlight on the budding labor movement at the turn of the last century, specifically on Fannie Sellins, an immigrant factory worker turned labor activist. The story is a timely, tragic, and ultimately inspiring must-read (for adults too!)

I am always in awe of writers who turn true events and real heroes into compelling non-fiction narratives, and after reading this compelling story, I was eager to hear more about what inspired Mary to write it.

This book was first rejected for publication more than ten years ago, but I never lost my passion for the story of this brave woman. I never stopped believing that Fannie Sellins' biography is relevant today.

Here's the anecdote that first stirred my admiration for Fannie’s courage.  During a coal miners strike in Colliers, West Virginia, a federal judge issued an injunction barring union organizers from talking to workers union "in their homes or on the streets."


The strikers held a mass meeting at the town Opera House and due to threatened arrests chose a man to speak who was not a member of the mine workers union.

Fannie had already defied the judge once, and been cited with contempt of court. She knew if she spoke, she would likely be arrested. But after the main speaker, she took the stage insisting on her right to free speech.

Fannie told the crowd she had spoken from platforms all across the country in support of striking workers, and a judge in West Virginia could not deny her that right.

“The only wrong that I have done is to take shoes to the little children in colliers who needed shoes. And when I think of their little bare feet, blue with the cruel blasts of winter, it makes me determined that if it be wrong to put shoes upon those little feet, then I will continue to do wrong as long as I have hands and feet to crawl to Colliers.”

The early 1900's have been called the Gilded Age of American Industrialization. Owners of industrial corporations were the “gilded” while hundreds of thousands of workers subsisted on poverty wages. Today the gap between the rich and poor in America rivals the 1920s.

Twenty-two percent of American children lived in poverty in 2013 compared with 18 percent in 2008, according to the Kids Count Data Book,* an annual report that ranks states by the well-being of their children.

With the exception of Romania, no developed country has a higher percentage of kids in poverty than the United States, according to the United Nations Children’s Fund.**

Forbes Magazine disputes these stats on child poverty. Forbes, a leading source of news for American business and financial people, published the assertion that the statistics were unfairly twisted to suggest the level of poverty in the U.S. is higher than is true.***

There will always be disagreement and debate about how to handle the issue of poverty. But while the posturing continues and the arguments fly, it is the innocent and helpless who suffer. The largest group of impoverished children are age 0-3.​​​​​​​****

For more on wealth disparity in the U.S. click here.

Do you know what economic inequality looks like? Pick it out on a graph here.

Fannie Sellins put her hopes in the union labor movement. She believed America could rise to its ideals of equality and justice for all and she spent her life working to make change happen, even when she ended up in jail and in danger for her life.  In fact, Fannie was eventually shot by company gunmen during a strike in Western Pennsylvania.

My hope is that her courage will inspire us to continue the work of providing justice for those in poverty through no fault of their own.

To find out more about my books, my calendar or how I help students, teachers and librarians visit my website. www.MaryCronkFarrell.com

And here's a book trailer: