Driving in Cars with Dogs and Cats

A few days after the election, my husband and I went on a spur of the moment trip to the woods. We booked a cabin, overfed the fish, threw the dog and the cat in the car and went on our way.

The dog shivered and panted and salivated on my lap. The cat sporadically moaned in the back seat. My husband and I didn't talk much. I don't know if this is the difference between men and women in general, or specifically a difference between us, but we were reacting differently to the post election landscape.

The weekend before the two of us had tromped around town canvassing and reminding fellow Ohioans to vote. We were buoyed by the camaraderie of the canvassing group, the energy and hopefulness and excitement, the sense that we were contributing to something greater than ourselves, something important.

Now, a few days later, I was having trouble sleeping. I kept bursting into tears at random awkward moments. My husband was stoic. Sympathetic but trying to be realistic.

A few days' escape into the woods would do us all good, he decided.

The cabin was tucked away in the mountains. We couldn't get a cell signal and for most of the time we were cut off from the world. We hiked through woods and around rock formations and caves and waterfalls. The people we did run into, we didn't interact with. The dog was joyous. The cat loved prowling around an unfamiliar cabin.

At night my husband and I sat out on the deck overlooking the woods in a hot tub. I was gearing myself up to settle down. Sip wine. Listen to Norah Jones. The burbly hot water felt kinda nice. Maybe everything was going to be okay.

I looked up and there was a freaking full blown raccoon walking across the deck rail, two feet from my husband's head.

Miraculously, I kept my wine from spilling as I tore the hell out of the hot tub.

I only managed to write a few words that weekend.

All month I've been working on a new novel, pledging to write 50,000 words by the end of November for the annual NaNoWriMo. I was plugging my way slowly through a gigantic expanding mess, feeling a lot like Sisyphus, the poor sap from Greek mythology who's cursed to push a boulder up a mountain every day and then watch it roll down at the end of the day. Also, I think he got his liver pecked out by giant birds.

What was the point in writing another mess of a novel?

And then at the same time, I was revising a novel for my agent, delving back into a previous mess of a novel and trying to make it somehow less of a giant mess.

My husband and I went for another long walk. We lost the trail for a while and came out on a windy road in the middle of nowhere and stumbled onto an old church that looked like it belonged on the set of The Walking Dead. 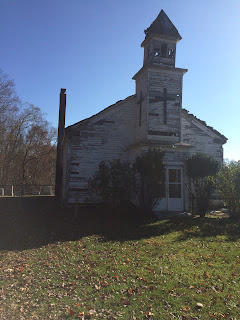 At night back in the cabin in the middle of the woods, my husband and I curled up on the couch with the dog and cat, cut off from the world and wondering what the hell the raccoon might be doing out there on the deck.

The drive home, we didn't talk much again. At some point our phones picked up a signal and pinged on, all of the messages and notifications and emails scrolling out on our screens if we wanted to look at them.

We didn't. The dog shivered and panted and drooled. The cat occasionally let out an unearthly yowl.

Home, and back to normal or whatever normal is.

Yesterday I reached 50,000 words on my messy NaNoWriMo novel. I "won" and they gave me a special badge.

Today, I finished up another edit for my agent. The book is clean and lovely and far from messy. It's not perfect, but it's good, I think. I hope.

Three weeks after the election and everything is the same.

But as always, I do what I do. I write to find my way through.