Democracy with a Side of Pea Shoots

I hear the word Petition and I think of the line in the Declaration of Independence:

In every stage of these Oppressions We have Petitioned for Redress in the most humble terms: Our repeated Petitions have been answered only by repeated injury... something something about pleading with the King of England to listen to us.

Not what I thought I'd be doing on the hottest day of the year (so far) in my little town of Upper Arlington, Ohio. But here I am at local Farmer's Market, holding a clipboard, asking people to sign a petition.

I'm set up in the shade, cursing myself for not bringing along a bottle of water. Or a wading pool. As people wander toward the vegetable and flower booths, I accost them, politely. I've got a smile plastered on my face, my spiel memorized:

Hi! Have you signed the petition for Fair Districts Ohio? We're trying to stop gerrymandering in Ohio Congressional districts...

At this point the person I've accosted does one of three things:

2. Waves me off with a "I've signed that already!"

3. Gives me a look that says, BACK OFF WEIRDO as they hurry off in the shimmering heat toward the table heaped with bags of organic lettuce and pea shoots.

Luckily, I am not alone in my petitioning quest. I'm here with Lyddie, reluctant (but good sport) 8-year old daughter of a friend. Lyddie's babysitter fell through, and now, after a fun afternoon splashing around the public pool, she's stuck with me at the Farmer's Market where I've agreed to collect signatures for a petition.

Me: Hi! Have you signed the petition for Fair Districts Ohio? We're trying to stop gerrymandering in Ohio Congressional districts.

Accosted woman: "I have no idea what you are talking about."

AW: (waving me away)

Fun facts for woman in the above exchange:

The way things work in Ohio is every ten years, after the census, whatever party is in power gets to draw the district lines for our congresspeople. Sometimes this means the Democrats get the honor. Sometimes the Republicans do it. But either way, it's led to what most people would call unfairly drawn congressional districts.

Communities split and parceled out into three or four districts. Towns represented by leaders who basically pick their own sure-thing voters.

Anyway, the Fair Districts Ohio petition is a plea to put some common sense back into the system--a request for a transparent process where both parties have a say in the drawing of districts. We need to get 500,000 signatures for this to appear on the ballot in 2018.

This week I need to get sixty signatures. Today, I am hoping for twenty-five.

Lyddie is not thrilled with my odds. She's flopped out in the grass in the meager shade, fanning herself with my information flyers. She's given up on coloring in her coloring book. It's too hot to turn cartwheels. Thank GOD the farmer in the organic meats booth across from us has taken pity and offered her a popsicle.

I feel like a waitress back in my waitressing days. Hey! Would you like fries with that? Hi there! Do you want to help me save our Democracy! Hello! How would you like your burger cooked?

"Well, are you going to explain what the petition IS?" he asks.

Lyddie covers her head with a beach towel. "What a fart face," she says after the man stalks off to check out the organic meats.

The guy selling lettuce and pea shoots laughs. I drift over to his booth and we chat for a bit about the heat. And about our lovely customers. After fart face leaves, the organic meat farmer joins us. Naturally, I ask both guys to sign my petition. In turn, I buy pea shoots and lettuce and rib eye steaks.

All and all, a fine day for America. 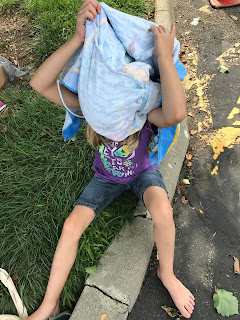