A few weeks ago I visited the National Civil Rights Museum in Memphis, Tennessee. It was my second visit. The first time was fifteen years ago.

I remembered it being an inspiring place.

A monument, in a sense, to the thousands of every day people who rose up during the struggle for civil rights. College kids who risked their lives to help black people register to vote in the South. Teenagers who sat at restaurant counters while enraged racist people dumped food over their heads and beat them. Preachers and rabbis linking arms and marching, singing We Shall Overcome.

Fifteen years ago I thought that what I saw in the museum was history.

If you go, you will see the remains of the fire-bombed bus, where once students rode for a voter registration drive. You will see the lunch counter, the stoic and courageous people hunched in front of the surrounding mob. You will see a brave kindergarten girl walking into a school escorted by soldiers.You will see statues of the sanitation men in Memphis who were on strike. Each statue holds a sign. I AM A MAN.

You will see the hotel room where Martin Luther King Jr. spent his last night on earth. He was in Memphis to speak in defense of those men. He was shot on the balcony outside the hotel.

Now the hotel is the Civil Rights Museum.

I walked out of the museum fifteen years ago feeling jubilant and inspired, charged with energy at what one person could do to effect change, and one more person, and one more-- ordinary every day people who had reached a breaking point, who would no longer stand for injustice, who marched to show that they had had enough and that they believed in the promise of America, that all men are created equal.

And that meant all Americans.

I went to the museum this time with my grown daughter and her boyfriend, and a friend of mine and her daughter. We are white people. I must mention this, even though I feel weird mentioning it-- it is something I have never felt the need to mention before. When I write about myself, when I write characters in stories, I picture whiteness. I do this because I have grown up in a country where the majority of the people are white. White is the default. By this I mean, that it is assumed

This time when I saw the bombed out bus, the lunch counter, the angry mob, I still saw the heroes who rose up against oppression, of course, but I also saw the faces in the angry mob, the faces of the bombers, the shooters, the police officers with fire hoses.

We sat in the dark to watch a short film before we began our tour. When I say We, I mean my daughter and her boyfriend, my friend and her daughter, the only white people in the darkened room, and I mean the other members of the audience that day, who were black people.

The film began with people speaking about American history. One person after another adding a voice to tell the story, of slave ships, of human beings held in bondage, of families split apart, of beatings and murder, of a Civil War, of promises made and broken. One person after another, telling a story of lynchings and unjust laws, of segregation and humiliation. We, the voices said. We. This happened to us, they said, and we rose up.

When I say We, I mean, black Americans.

I am ashamed to say that this was an illumination for me. I have never sat in a room in America and known that when the word We was spoken, it did not include me. For the first time in my life as a fifty year old woman, I became Other.

It is, to put it mildly, an uncomfortable feeling.

It is what American people who are not white feel like every damn day.

Not me! Not me! I wanted to tell the American people in the darkened room. I didn't DO this!! I don't believe in this! My ancestors weren't a part of it! Please, don't see me as Other! Please don't see me as the people holding the fire hoses. Don't see me as the smiling white faces in the crowd cheering a lynched man hanging from a tree.

There is an artist and writer named Bree Newsome, a black woman, who speaks about the Civil Rights Movement in America.

White people held the fire hoses and screamed in rage at school children entering a school. White people beat protestors and bombed churches and met peaceful marchers on a bridge with guns.

We must acknowledge all aspects of our history. And when I say We, I mean white people. I know it feels uncomfortable. I want this to be in the past. I want it to be history. I want to turn away from it. Defend myself. Say both sides...

I am asking you not to do that. And when I say You, I mean my white readers.

I am asking you to squirm with discomfort in the darkened room for a moment.

And then I am asking you to step out of the room with me and choose your side. 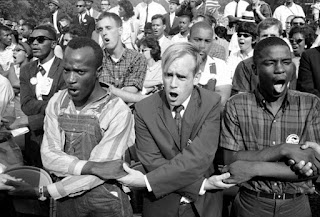