On sleeping for a year and waking up in a storm

We're probably meant to feel horrified. A girl, who seemingly has everything, decides to escape from the world by sleeping for a year.

But I have to admit that I was strangely drawn to the main character's quest in Ottessa Moshfegh's My Year of Rest and Relaxation. It's the biting language of the book, the dark humor, the thoroughly unlikeable, and yet, somehow sympathetic narrator, and the blurb on the flap that promises one of "the worst psychiatrists in the annals of literature." 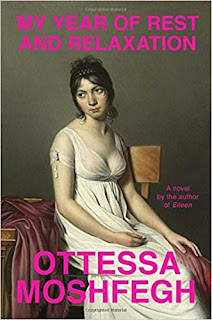 I read the book in one day, curled on my own couch, laughing at times at the absurdity of the situation (can you really go to sleep for a year?) and wondering too, how to sign myself up, because really, who doesn't want to occasionally throw on Netflix and binge-watch a season of something while drifting in and out of reality?

In the case of our narrator it's not Netflix, but a trusty VCR and an unending supply of movies to binge-watch. The year is 2000. She's just out of college, living in New York City, working at a pretentious job, basically playing the role of a bored snotty beautiful receptionist at a surreally weird art gallery. Her on again/off again boyfriend is an asshole but she keeps going back for more. Her best friend is an easy person to push around, over-the-top desperate and pathetic, but probably the only person in our narrator's life who genuinely cares about her since both of her parents died.

Oh, and there's that awful psychiatrist, eager to prescribe any and all medications to ensure this girl gets her sleep.

I won't tell you the rest, but please, someone else read this so we can talk about it!

Warning about the next book:

There's a dog in it, that dies. I knew this going in, which is why the book sat on my bedside table for two years. I have a thing about dogs in books, specifically, dogs dying. The book in question won the National Book Award though, and I typically like to read those. The author Jesmyn Ward won a second National Book Award last year, so I couldn't deny the pull of the book any longer.

An hour after closing Moshfegh's book, I jumped into Ward's. It's called Salvage the Bones, and oh my God. The writing. This is, I don't know what to call it exactly, Faulknerian? Luscious metaphorical language and description, a story and characters that grab you on the first page. 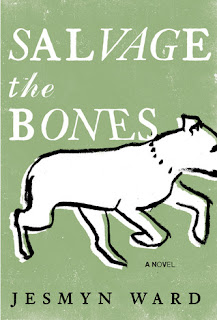 It's twelve days before Hurricane Katrina hits and our main character is an African American girl, fifteen, newly pregnant, poor, living in the deep backwoods of Mississippi with her alcoholic father, her brothers, one of whom raises pitbulls to fight. The dog, Jesus God the beautiful dog, and these kids- the intense loyalty they have for each other, their determination to grow up, to survive, and all the while,

After I read the book, practically shaking at the end when I knew what was going to happen but praying I was wrong, when I closed the book, wondering how I could feel not despair but somehow hope, and how in the world did Jesmyn Ward DO THIS? I looked up everything I could about her,

listened to an interview she did after she won her second National Book Award for Sing, Unburied, Sing, which I can assure you will not sit unread for long on my bedside table. She's made me question everything I thought I knew about our country, taking me by the hand gently and then slapping me upside the head,

waking me up from my privileged binge-watching reality into a world I didn't know existed but know now has always been here.