or they're pretending they aren't. My husband holds the map and charts our course, while I knock on doors. That's the deal we struck, although one of the days we go out canvassing together, when it looks like it's going to rain, he darts across the street and hits the odd numbered houses on the list while I do the even.

I can hear him knocking, talking enthusiastically about how much he loves the candidate we're canvassing for, how he's met her five times. I laugh when we're back in the car, safe out of the downpour. What was that all about, I say. You've never met that candidate.

My husband shrugs. I got caught up in the moment, he says.

But I wonder about the houses we skip. Not the obvious ones with Republican candidate signs in the yards. But the others. Houses with bikes thrown on the lawn. Carved pumpkins on the stoop. Leaf piles. Maybe they're not registered in either party. Maybe they keep their views private, their right, of course. Or maybe they don't vote.

I knock on a door and the man inside scolds me. I'm tired of you people coming here all day, he says. You're going to wake my baby.

Flustered, I tell him I'm sorry.

Ah well, I say. I check the box for non-supporter. I cross the house address off the list.

Something I remember from history class is that in the lead-up to the Revolutionary War only 40% of the colonists supported fighting the British. Twenty percent supported the British, the presumed MABA crowd (Make America British Again).

Everyone else was neutral.

I mean, I get it. We're all busy. Going to work. Taking care of the kids. Making meals. But how do you not have an opinion one way or another? How do you not take a stand?

And I wonder, Did the neutral ones stay neutral throughout the war, or was there a line for them, a moment when a light bulb went off and they thought, Hmm. Okay, that's it. Now I care.

At the house where we meet for canvassing duty, volunteers are bustling around. Checking in address packets. Signing out the next shift of volunteers. Leading a brief training for the newbies. Someone's in the kitchen setting out sandwiches and a bowl of candy.

It reminds me of my PTA days, the same core group of volunteers, the people behind the scenes making sure that the teachers had the supplies they needed and that all the fun programs went on without a hitch.

Day three, canvassing, I go out with a friend.

A woman out raking her leaves says, Oh good! I need one of these sample ballots to take in with me when I vote. A man says, I'm a Republican, and when I start to turn away, he laughs and says, I'm joking!

But most of the people are not home or are pretending not to be. We hang a sample ballot on the doorknob. Head to the next house on the list. 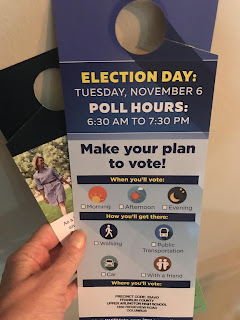