The letter from my agent, the one where she wrote me six single-spaced pages of notes that I might want to consider, that was tough to read. And tougher to digest. I started working part-time at a bookstore during the writing of this book. And it was tough to adapt to a new writing schedule. I found a library job in the morning and taught myself to work in the afternoons. I found a library job in the afternoon and now I am teaching myself to write in the mornings.

There are a million reasons every day for me to not sit down to work. The dog wants to be walked. The house wants to be painted. My daughter wants to graduate from college. Meanwhile the book spins around inside my head wanting to be written.

I started this draft last summer. Now it's almost May. Outside my garden's been bulldozed in preparation for our move. It was too big, too overwhelming, I thought, for a potential buyer to want to mess with.

Once, when the kids were younger and I hadn't yet been published and was suffering from an almost insane level of desperation and desire, writing feverishly book after book after book, submitting and collecting rejections, pinballing between absurd confidence that one of these damn stories would eventually sell and despair. That was when I came the closest I'd ever come to quitting.

It lasted a week and then I was back at it.

I have one chapter left to write.

(And okay, a few earlier scenes to fiddle with.) Then I'll send it off to my critique partner to get her thoughts. Another revision before sending it off to my agent. In all likelihood there will be a new single-spaced letter of notes I'll want to consider.

I will consider them.

New grass is coming up in the place where I once had lettuce. Along the edge a defiant asparagus stalk pokes out to tease me. 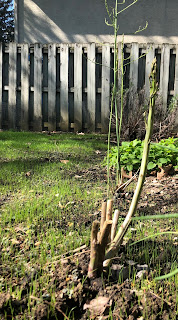 When I'm finally finished, I already know the story I'll work on next.

Email ThisBlogThis!Share to TwitterShare to FacebookShare to Pinterest
Labels: finishing a book