Six years old and I had already lived in six places, one of them a tent in a campground. But that was only for the summer.

What happened was the duplex where my family was living was sold and the new owners booted us out in June. And then the apartment my mother found for us wouldn't be ready to move into until September. I'm unclear on the details of how we ended up at a campground.

My father took the car and moved in with his mother. My mom's sister gave us her tent and drove my mom and me and my two younger brothers out to the campground. It was the 1970's. Camping was In. I had a Barbie camper. I used to set it up on the grass or drive it down to the pond where my brother and I swam every day.

It wasn't really swimming. We lay on our stomachs and kicked in the shallow water and pretended we were floating. Our baby brother sat in his gated play area, drooling. He learned to stand up that summer by grabbing onto the bars. Mostly we ignored him. Ate our hotdogs at the picnic table under a tarp. Drank our Joy juice, the orangey drink my mother mixed up for us, which we called Bug juice because if you left a dixie cup of it out for more than a minute, you'd find insects dying on the surface.

We only went into the tent at night. Rolled out sleeping bags on plastic swimming rafts. By morning the sleeping bags had always drifted off the rafts and we woke up on hard ground. It was musty in the tent. Don't touch the canvas when it rains, my mother warned us. It'll make the water drip on your face.

Rainy nights I fought the urge, but in the end, always touched the canvas. My mother was right. Rainy days were the worst. Nothing to do but sit at the picnic table under the sagging tarp, rain spattering our backs while we colored in coloring books. The best days were spent rolling down the hill above the pond, tromping through the woods, playing on the playground.

My goal that summer was to see-saw on the seesaw, but I didn't have anyone to balance out the other side. Both of my brothers were too young and the others kids were weekend kids at the campground, coming and going too fast for me to work up the nerve to introduce myself.

My sixth birthday my mother hung balloons over the picnic table. My aunt gave me another barbie for my camper, the Sunshine Barbie who came with her own beach towel. A Mod Ken who had a collection of sideburns and beards that I promptly lost.

By the end of the summer my brother learned to swim for real. Our baby brother took his first steps. I made a friend and we see-sawed until dark. 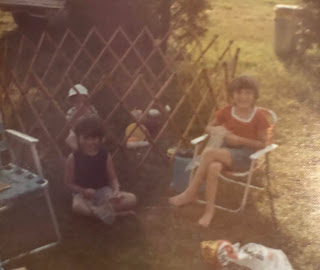