I've been watching a lot of Rom-Coms lately, spurred on by my daughter who's home for what will likely be her final summer with us. This fact is something I'd rather not explore too deeply, and nightly-watchings of Rom-Coms are the perfect solution. So far we're exploring the classics-- mostly Norah Ephron-style and/or Meg Ryan-ish, with a dash of Hugh Grant sprinkled in here and there.

On Mondays we put that on hold to watch the Bachelorette, which is not rom or com-- unless you count hard-to-tell-apart bearded guys bickering with each other and one narcissistic psychopath trying to manipulate the clueless bachelorette-- to be rom-mish and com-mish.

And then it's back to true Rom-Coms, Sleepless in Seattle, You've Got Mail, Notting Hill...

A few weeks ago I went to the book launch of a Rom-Com, my friend Kerry Winfrey's new book Waiting for Tom Hanks. The story is the very best of the genre, fun and sweet and smart. Added bonus: it's set in Columbus and there's a scene in a bookstore, the very bookstore where Kerry held her launch party. When I was getting my book signed, I asked Kerry why she thought Rom-Coms are back IN lately, and she said, They're an escape from what's going on in the news. 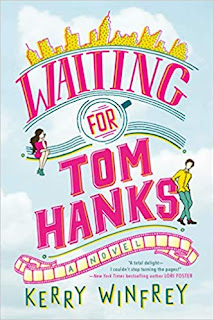 She is right about that. When I read her book, I immediately found myself immersed in a different world. It's a funny darling place where the heroine's writing a Rom-Com in a coffee shop and playfully bickering with a handsome movie star, in town to film, what else? A Rom-Com.

I don't usually read Rom-Coms. And by not usually, I mean I stopped reading them when I was 15. Okay, this is a total lie. I did go through a more recent young adult romance binge. (ahem. Twilight.) But Twilight (and all of its many two-boys-fighting-over-one-girl angsty variations) was all rom and no com.

What I loved about Kerry's book was how she played around with the genre, calling attention to all of the romantic tropes, from the spilling-coffee-on-each-other meeting to the dash-to-the-airport-with-the-zany-friends conclusion, in a funny, but never mocking way,

because if you mock a Rom-Com, you lose what makes it both rom and com

That is, after all, what is at the core of these stories. Hope, that we can find our one true love somewhere out there (or maybe they've always been there and we just never noticed). But even more important, Hope, that we live in a world where we can still believe in something hopeful.

I don't know if I believe in that world anymore.

Or more truthfully, I don't know if it's fair to Go There when other people are suffering so much in reality.

But here's the real question: Is it possible to live in our present dark reality without a place to escape to every once in a while?