It was really surprising to me, because up to that point, I had never thought of myself as the type of person who got thrown out of government buildings.
A librarian friend of mine, who knew that I had passionate feelings about libraries, told me that Ohio was considering changing the state law that required schools to have librarians. Also, PE teachers, art, music, orchestra and drama teachers, and school nurses.
It was being framed as a local choice kind of thing, but it was pretty clear that what was really going on was the state was looking for ways to save money. The school board was having a meeting, and some people had planned a rally outside the building, where students and parents and other members of the community would speak out in support of those positions.
I was asked to speak on behalf of librarians. My librarian friend told me to meet her downtown at the Board of Education. I had never spoken at a rally before. Actually, I'd never been to a rally period, so I had no idea what to expect. I arrived early and went into the building and putzed around in the lobby for a few minutes until the security guard at the information desk noticed me and asked why I was there.
For the rally, I said, and he told me I needed to leave.
I thought he was joking.
And I kept thinking he was joking the entire time he was escorting me out of the building, guiding me completely off the property and down onto the sidewalk.
When I finally realized this was not a joke, I was surprised and defensive, going a little Karen-y on the guy. Wasn't this a public building? Wasn't I, a member of the public, allowed inside?
Apparently, the answer was still no.
The rally went on as rallies do. Sign waving and chants. Speeches and that nice feeling of camaraderie hanging with other people who are as passionate as you are about the same things. I was energized and hopeful. We the people were making our voices heard! Soon everyone in Ohio would hear about what was going on and speak out against this terrible idea!
A few days later the school board voted and schools all over the state started cutting librarians and school nurses and art, music, orchestra and drama teachers, (but probably not PE teachers because who are we kidding here).
I was shocked.
Honestly, I don't know what shocked me the most. The state cutting the positions or the school board not listening to our pleas (maybe they'd had no intention of changing their minds? Maybe the whole thing was a foregone conclusion all along?) or the majority of the people in the community who never knew there was a rally and didn't realize they were about to lose librarians and all of those other essential positions at their schools. Or maybe...
they didn't care as much as I did?
Also, I admit, I was still feeling shocked about getting thrown out of the building.
Now, seven years later, that's the part of the whole episode that still embarrasses me. Not that I got thrown out but that I had been so entitled and aggrieved about it. The me that gave the speech at the rally was new to the party, just figuring out the reality that long-time protesters had already learned:
the people in charge don't usually listen
the people in the community don't always know or care what's going on
And real change, if it is going to happen, takes time and work and much much more than a two minute tearful speech at a rally. 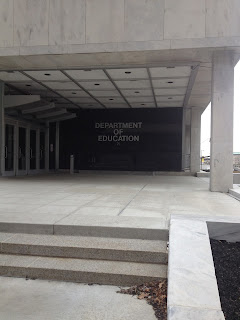