I'm in that place again

where I am mad at the world.

I want to go out to the garden but the garden is covered by a weird late April snow. A few miles from where I live a police officer shot a sixteen year old Black girl and killed her. It looked like he had to do it, the mayor said, calling the girl, a woman. She was fighting with another girl. She had a knife.

The snow on the redbud trees is so thick it weighs down the branches. The tulips in my neighbor's yard are drooping cups of snow. I used to teach sixteen year old kids. And I assure you they were kids even though many of them were taller than I was. Sometimes they used to get into fights in the school hallways.

You could hear them yelling Fight! and that was the signal for the coaches to wade in and pull everyone apart. We only had one security officer and he didn't have a gun, thank God. Before I was pregnant with my first child, I confess that I did not always see my students as other people's children, as people themselves. But sometimes a girl or boy broke through and reminded me. Linda, for example, who could barely read.
I had no idea how she made it to eleventh grade and I had no idea how to help her. I was an English teacher, but that meant teaching The Scarlet Letter, not phonics. My first year teaching I had the students keep a journal. A half a page of a response to whatever we were reading. But some kids wrote much more. In scratchy scrawl and barely past a first grade level, Linda wrote about her mom, about her fears, about herself.
I honestly don't remember what I did beyond inviting her to stay after school and going over assignments with her, but after she graduated, she kept coming back to visit. When she learned I was pregnant, she sent me a gift, a baby blanket, that both of my kids used all throughout their babyhoods. She wrote me a letter, thanking me, and the words were perfectly formed and readable and lovely.
But there were other girls and boys I didn't see at all. I won't write this girl's name, but if there was an opposite to Linda she was it. She was in my homeroom so I only saw her for ten minutes a day and the ten minutes were always charged with tension. She was tardy. She was out of her seat. She was talking. When I called her out, she cussed me. It was a daily battle and she was fourteen years old and I was going to win, damn it.
She was pregnant. She dropped out of school. She died during childbirth. I don't know where my humanity was because I didn't care. All I could think about was how belligerent this girl had been to me, every second that I knew her. Because we had been in a battle, I could only see her as the enemy. Think about this:
You are a girl you are a boy you are a person and you are mad bullied scared and you are fighting, defending yourself or attacking but it is justified in your mind
the police show up and within ten seconds they shoot you in the chest four times
The bird feeder hanging outside the kitchen window has snow on its ledge. I watch an agitated bird hop around, darting back and forth, unable to land. I am so mad at the world that I can hardly think straight and even more mad because I am this world too. I slip on my robe and head outside to swipe the snow off the bird feeder.
I am twenty seven years too late, but I am so sorry, Aleisha. 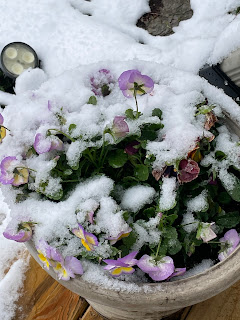 Email ThisBlogThis!Share to TwitterShare to FacebookShare to Pinterest
Labels: being a teacher, being a teen, broken-ness, police brutality