Channeling Gladys Kravitz* in the Hellstrip**

I don't know how it happened.

How I became the nosy neighbor, the crotchety woman peering through the blinds. I promise you I am not a total karen, but the other day I could feel the itch to storm out onto the front lawn and shoo away the loud kids playing in the street at nearly midnight.

I wasn't that bothered by the loudness or lateness, (although midnight is late!! And why did they have to yell so loudly??!!) No. It was the fact that they were trampling the flowers I'd just planted in my hellstrip. Every time a car drove by--which is a lot, because we live on a fairly busy street--the kids would jump onto the curb

AND ONTO MY NEWLY PLANTED FLOWERS!

But I took a deep breath and closed the blinds. The entire point of my hellstrip project was to plant hardy, non-fussy flowers, flowers I wouldn't mourn if a dog peed on them or someone traipsing back from the Starbucks dropped crumpled straw paper litter on them. I spent no money on this project. Everything was recycled. The seeds from plants I'd grown last summer. Clumps of flowers dug up from my backyard. The only cost was my time.

Okay, it was a lot of time.

I had to shovel up the grass and weeds and do my transplanting and set out mulch and flat rocks. And then there was the watering, to keep it all going through the 90 degree heatwave we were having. The work was done and my vision was coming to life and I was feeling joyful,

and then came the Night of Noise and Trampling.

For a few angsty minutes I watched through the blinds and then closed them, embarrassed. I had a sudden memory of my younger brothers playing basketball in the driveway of the house where we grew up and how every time a ball bounced over the hedge, they jumped through the bushes into the next door neighbor's yard. That lady scared the crap out of all of us,

charging out of her house to shout about her lawn and pristinely coiffed bushes. At some point my brothers stopped going over to get the ball because one of them got his legs torn up. The creepy rumor was that the lady had purposely planted deadly thorny roses next to her bushes. I don't know if this is true, but if it is, oh my God, what a loony tunes she was, I mean

these were just kids playing outside on a summer night,

and anyway, plants will grow back. 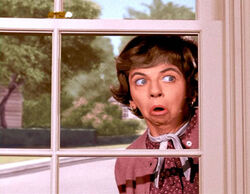 *Gladys Kravitz. The nosy neighbor in the old Bewitched TV series who was always trying to catch Samantha the witch doing something witchy. I always thought of her as anciently old, but it turns out, the actress who played the role, Alice Pearce, was in her mid forties when she appeared on the series. 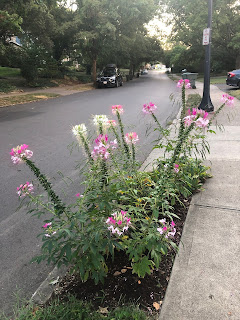 **Hellstrip. What the people in my neighborhood call the strip of land between the front sidewalk and the street. In most places you'll find grass and/or weeds, but people around here like to plant flowers and other plants to attract bees and butterflies.