Muddling into the New Year

It's cold outside but every day we walk the dogs.

Not a routine, my daughter tells me. A ritual. Doesn't that sound nicer? We are all about rituals around here lately. Weekly zoom dinner meet-ups with friends. Funny TV shows at night squished up together on the couch (for the record, we are watching Derry Girls and it is very good). Christmas passed

and I only nearly cried once. It happened in the kitchen when I was making Julia Child's Beef Bourguignon and listening to Judy Garland's rendition of "Have Yourself a Merry Little Christmas" and even though I've heard the song a million times, apparently I've never really heard it before, because when she said

Someday soon we all will be together

if the fates allow

until then, we'll have to muddle through somehow

I almost lost it, thinking about how it was the first Christmas in 27 years that my son wasn't home with us and we didn't have a full house of people and instead we had a zoom call with everyone, which was nice, but not exactly the same, and my in-laws in Nashville couldn't get online because they had no wi-fi because of the suicide bomber. Excuse me, the "Intentional Explosion set off by the lone-wolf-disgruntled-white-guy." But we didn't know that then. We just knew that none of our calls were going through.

The meal smelled heavenly and Judy Garland's voice was breaking and two of my friends recently were diagnosed with Covid and a few weeks ago I mailed my son his stocking, the precious handmade one sewn by my mom, risking a trip to the P.O. to send it off and realizing only after I sent it, that I'd probably never see it again,

and how are we all supposed to muddle through somehow? My daughter, home now since May, her adult life in a state of suspended animation but doing a decent job of modeling muddling, all things considered, gave me a book about Hygge,

which I pronounce Hi-Ghee, but is actually supposed to sound more like Hue-Gah, because it's Danish. Hue-Gah, from what I gleaned from the book, is a life-style-ish custom in Denmark that's all about comfort and coziness and involves wearing warm socks, drinking hot cocoa, tossing blankets around and lighting candles.

Also, the Danes bike everywhere and park their kids in strollers outside cafes and eat pastries and love their jobs and pay high taxes, but get in return, free health care and free college and everyone reads books under the blanket tents they've erected in their candlelit living spaces.

Which now that I think about it, seems like a fire hazard. My friends who have Covid are doing okay and my in-laws have phone service again and my son sent me a picture of his baby-hood stocking hanging on the wall in his apartment two thousand miles away.

The Beef Bourguignon was good and I'm not just saying that. My daughter's boyfriend, who is also suspended-ly animated with us since October, said so too, and I take this as a great compliment because he grew up in France, where beef (pronounced bif) bourguignon was served in the school cafeteria.

On Christmas Eve it snowed and the four of us (me-husband-daughter-boyfriend) bundled up hue-gah-style and went out into the dark silent night with the dogs, the snow swirling on the quiet streets, the Christmas lights on the houses twinkling so brightly you could almost forget the pandemic and the friends who are dear to us miles away. Our hearts were light.

all of our troubles, for the moment, 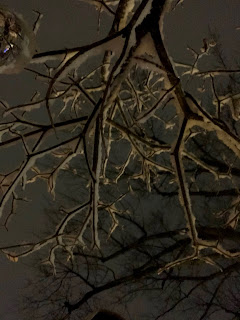