Afternoon at the library

and boys spill inside, playing lightsabers, the battle edging into the new books section, giggling, shouting, one of the boys collapsing dramatically in front of the self-checkouts. The older woman browsing a cookbook looks up and we both raise our eyebrows and smile,

thinking (gratefully) how our parenting days are behind us, or maybe that's just me, and when did this happen? One moment I was washing the dishes, peering out the window at my kids darting across the lawn, my daughter and her little friends prancing with broomsticks pretending they were Harry Potter, my son and his best friend tinkering with the Medieval-style catapult they'd built,

they're all grown up and far away, the real world much more precarious than any they had ever played, and darker than any I had ever imagined for them. And believe me, I can imagine a lot.

I read a book last week that I hesitate to recommend, not because it wasn't good, but because it did its job too well. Freaked me out, actually. Parable of the Sower by Octavia Butler. It is marketed as Science Fiction, when there's not much science-y or fiction-y about it. Published in 1993, it takes place in the early 2020s, in a world of extreme climate change and societal breakdown. Oh, and lots and lots of guns.

The narrator is a teenage girl, but it was the older folks in the story who interested me. Those people long for the past to what they perceive to be better times and are incapable, despite the imminent danger, of accepting reality. In the end (SPOILER!), they perish, and it's down to the younger generation to navigate the present.

The book is supposed to be hopeful, I think, and isn't all of dystopian literature? No matter how terrible, there are always a few left to tell the tale, is what I used to say when I talked up these books to my students.

But that was a long time ago, when a book like that seemed fantastical. When I was young myself, and so, naturally, assumed I would be one of the survivors.

The boys pick themselves up and resume their lightsaber battle. That movie came out years and years before they were born, but isn’t it funny how perfectly they mimic the whoosh of electricity, the clank of light beams hitting light beams? I show them where we keep the Star Wars books and they seem weirdly surprised. 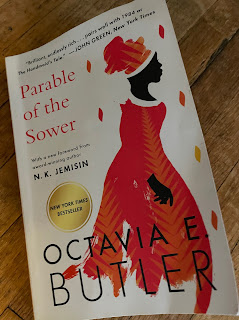