What happened was I thought it was a cucumber.

That's what I'd planted, a labeled seedling, a gift from a gardening friend. And it did look like a cucumber at first. Small. Pale green. The vines I staked, the coiling tendrils, the delicate yellow flowers--all very cucumber-like.

And who knew what variety my friend had given me--I mean, last week I was surprised by the weirdo arm-length white cucumber--so maybe this one was supposed to turn out bowling ball large, a darkening green? If I know anything about gardening, I know the more I know, the more I know I don't know. But isn't that the way with everything? Take the chamomile

I planted two summers ago, the seller at the farmers market assuring me it would re-seed right where I planted it, so I took care. Found the perfect spot in my herb garden for it to take root, but then, the next spring it was gone. It wasn't until several weeks later I found an odd seedling sprouting in a place I would never have planted something, across the patio, right at the edge of my husband's barbecue grill.

I almost yanked it out, thinking it was some kind of weed, but no, it was the chamomile, the seeds carried by a bird or who knows what. The garden goes where it wants to go. This year, I found a surprise cherry tomato plant popping up by the oregano. Volunteers, my mother-in-law calls them, and I love that word, the whole idea of it,

an unseen hand guiding the seed traffic, overseeing the design, and not just random accidents, the regurgitation of a robin, a shift of the breeze. And wouldn't it be nice if there were a garden-y ghost making note of the fertile cracks in the pavement,

some kindly presence who slows down the green bean production at the moment you have had your fill of them and speeds up the ripening of the zucchini on the day you want to make zucchini bread?

Don't we all love that volunteer friend who takes charge of the whole shebang, calculates the excessive number of white cucumbers from one plant, and nodding along, muttering to herself, suddenly snaps her fingers and announces,

Let's make this one a watermelon. 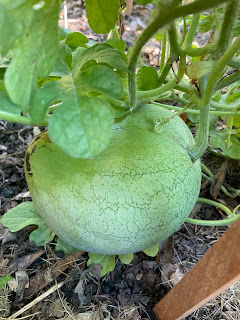