I want to tell you it wasn't my fault! That the person who came to my door was the one who started it! That he was selling some crappy cleaning fluid that I absolutely did not want and he had interrupted my writing time by knocking on my door and freaking out the dog,

who had been peacefully snoozing on the bed in my office, but upon hearing the door-knock, leapt off the bed and hurled herself down the stairs, forgetting momentarily that she is ten years old and has a bad hip and weak back leg, and so, therefore, tumbled most of the way down.

Also, the cleaning supply man was ON my front porch, knocking on the glass front door, and not on the steps OUTSIDE the screen door, where we have a clearly placed, perfectly working doorbell,

which gave me a brief scary flashback to the day three years ago when a social worker and two police officers were standing on the porch, peering through the glass door as the dog barked like a vicious hound from hell (instead of the normally darling sweet lovable Good Dog she is), because

a guy who knew the previous house owners and apparently was using our address, had done something suspicious and the social worker and police were here to find him, and when I carefully slipped out onto the porch, trying to keep Crazy Dog inside so a police officer wouldn't claim he feared for his own life and had no choice but to shoot her,

and explained that the guy they wanted didn't live here, that I didn't even know this guy, and the social worker and police officers kept looking at me skeptically, and I wondered for an anxiety-provoking moment if they might not believe me and would push me out of the way and go investigate themselves, and what if I hadn't been home, what if they broke down my door and and and--

(this is how my mind spirals out of control, even three years ago, never mind now, post Pandemic and Late Stage Capitalism and Downward Slide of Democracy and Fall of Roe and Women's Loss of Bodily Autonomy)

Cut to, I was persuasive enough to the social worker and the police of three years ago, because they left, somewhat reluctantly, but score another point for privileged in-a-bubble middle-aged white women,

"But you don't even know what I'm selling," he said, smile faltering.

AND I DON'T CARE! GO AWAY! And then I slammed the door in his face.

I felt terrible and wrung out after this encounter and kept replaying the episode, how I yelled at the guy and how I slammed the door in his face, and at the same time defending my own off the wall response and also playing the part of the guy (a hazard of being a writer, where you can't help but see the scene from his point of view, a guy just doing his job and some insane woman screaming at you, oh well, all in a day's work),

until I read this article on NPR.org about how maybe our personalities have changed since the pandemic, making some of us more distrustful and suspicious and wary and who can blame us, and I sincerely hope this is not true, and that most humans are still generally trusting and open and kind, and that I am the type of person who can politely say no to strangers without losing my mind, but in the meantime,

GET OFF MY LAWN!

(Excuse me. What I meant to say is, if you are trying to sell me something (and good luck with that LOL), would you please kindly stand outside of my house and ring the doorbell?) 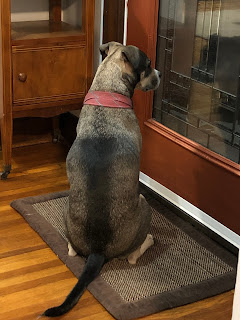