First, there was a wedding

and then there was a funeral. The wedding, we planned for over a year. The funeral, we took care of in less than an hour.

And how efficient it was and easy, the funeral director so calm and gentle in his suit. The box of tissues on the table, an offer of bottled water. He opened his laptop and pulled up what I realized must be a fill-in-the-blank form. He called my father-in-law by his first name, but added a mister. And where was Mr. Richard born? And what brought y’all down here? And was Mr. Richard in the service? And what branch of the service was Mr. Richard in?

And kindly to my mother-in-law: How long were you and Mr. Richard married? Fifty-eight years? Hmm. He was typing on his laptop and looking over the top of it, stopping every now and then to let us all collect our thoughts.

I don’t know what all of our thoughts were. I know mine were a mixture of all the words for stunned. The loss of my father-in-law and how his kind face kept floating up in my mind. The time my college boyfriend took me home to meet his dad and mom, how kind they both were and welcoming, taking us out to a show at the Grand Ole Opry and then to dance at country and western bar. Me, a manic Yankee girl from Connecticut, doing some kind of country western showdown whirl around the dance floor with my soon-to-be father-in-law.

He was a good person. I know everyone says this when someone dies, but in his case it is all true. A good husband. A good father and grandfather. A good friend.

But back in the funeral director’s office, I was amazed at how smoothly and quickly the process was going. Putting the finishing touches on the obituary and the service, selecting the coffin. And why wouldn’t it all be smooth and quick with this clean-cut man in his suit? He must’ve done this thing a thousand times.

And that had clearly been enough times to know that it was the very first time for us.

A week ago we were at a wedding and now we were going to a funeral. The planned for a year wedding. The planned for an hour funeral. Both had the food, the flowers, the music. The loved ones gathering. The laughing and crying together. 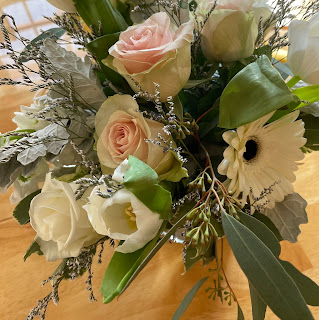