Nearly ten days without a refrigerator

and my husband and I were annoyed, but resigned to tough it out, packing up coolers on the back porch, the bottles of condiments, the eggs and cheese, all of the Thanksgiving leftovers. (Yes, the refrigerator conked out on Thanksgiving night, gradually, and then all at once.)

While we were enjoying dessert, my husband scrolled around online to order a replacement, excited that one could be delivered Saturday. It was only after he placed the order, that we realized that Saturday actually meant the following Saturday. Worse, the weather had turned weirdly warm, creeping up into the fifties, so we had to keep replenishing the ice out in the coolers. Still, how quickly we adapted,

heading out to the back porch for an egg or the mustard. We farmed out leftover turkey to a friend's freezer. We made do with room temperature drinking water. Nine days of this, and I said to my husband, Maybe, we don't even need a fridge!

Haha I was joking, but it was good to know that we could deal with a major inconvenience without coming to blows. (Although, there was one moment when we did snap at each other over our not-entirely-frozen chocolate banana smoothies. The frozen bananas had gone to... gloop out in the cooler.)

Totally unrelated, all week I was reading a book about the various transitions we go through in our lives, 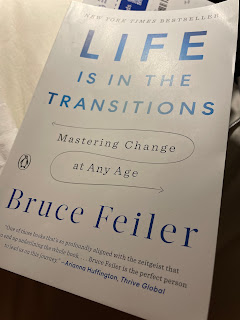 how we grapple with events that might shatter us—the job losses, the health crises, a death in the family. Along with those that are presumably joyous—a marriage, a career change, a new baby. For a while we spin around in confusion, trying to make sense of the new reality, but eventually we absorb, we manage, and eventually, we might even thrive again. Which is good to know, because for most of us, there'll be at least a dozen of these events over a lifetime.

Living without a refrigerator for nearly ten days is a blip in the ultimate scheme of things. It's nowhere near as time consuming or emotional as a wedding. And it doesn’t come close to approaching the shock and grief of a death in the family.

Coming so quickly after those two, though, I can tell you it's a blip that hits a tad harder, the kind of thing where you say, What else can happen? and then immediately want to reel those words back in, because you know what else can happen, and you really don't want to tempt fate, especially when you're still in the "spinning around in confusion"/"absorbing it" stage.

Anyway, finally, the day came for the new fridge to arrive, and I almost couldn't believe it, thinking there would be a delivery delay or maybe it wouldn't fit properly. But it was almost too quick and easy how it all worked out. Within a few hours the condiments were back in their proper place, the eggs fitted into the lovely egg compartment, bananas freezing up nicely for the next morning's smoothies,

everything normal again, at least in the kitchen. 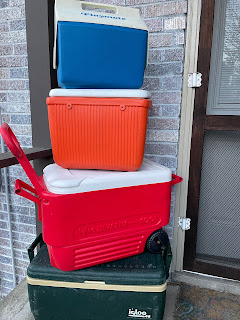 Email ThisBlogThis!Share to TwitterShare to FacebookShare to Pinterest
Labels: broken appliances, Bruce Feiler, change, Life is in the Transitions, resilience