The Case of the Mysterious Smell

It was burnt plastic. Actually, more like burnt metal, my husband insisted. Either way something smelled bad in the living room, and it was freaking me out.

The logical culprit was the Christmas tree. It's a fake tree with strands of lights already strung in the branches, and this year (the fourth year we've put up this tree), we'd noticed that some of the lights had fizzled out. Was there faulty wiring in the tree, something wrong with the electrical cords?

My husband and I sniffed carefully around the branches. We unplugged the light strand. The plastic-y (metallic?) burning smell did not abate. Or maybe it did? It was hard to tell. The smell basically had permeated the entire room at this point.

We'd just been sitting down to watch the latest installment of a show we've been streaming, the mystery series CB Strike that my brother had gotten us hooked on when he was visiting over Christmas. The show is about a British down-on-his-luck detective who teams up with his plucky receptionist to solve gruesome murder mysteries. It's very well done, despite the gruesome-ness.

At the same time, I've been reading a mystery-thriller set in Ireland written by my friend Edie Pattou. The book is a manuscript she asked our writing group to look at and I was immediately caught up in the story. A missing girl. Perhaps several missing girls. A plucky American author (struggling with some demons) teaming up with a grizzled Irish detective (struggling with his own demons).

The point is I had mysteries on the brain. What was the source of this horrible odor in the living room? If it wasn't the Christmas tree, could it be...

The TV is situated very close to the Christmas tree. It's also quite a bit older. Maybe eight years? What is the lifespan of these things? My husband and I sniffed around the back of the TV screen. The multiple cords. The firestick thing-y. The speakers. Any one of those could be the cause. We unplugged it all. And still, the burning smell. 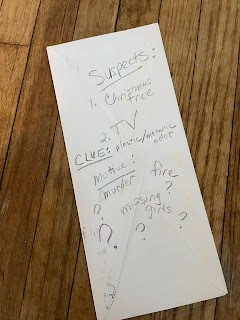 Oh my God. What if the house was on fire?

My husband, (the grizzled detective) (as opposed to me, the plucky heroine battling anxiety demons), checked on the smoke detectors to make sure they were all in working order. And then he began googling replacement trees, replacement TVs. Only day 5, 6 or whatever into my New Year's Resolution to be more purposeful about spending, and darn it all to hell, were we going to have to buy something?!

I went to bed with the burn-y smell in my nostrils, the gruesome British murder mysteries and Edie's missing Irish girls, all twining up in my head. In the morning when my husband and I were getting ready to do our morning yoga stretches with Kassandra with K, I switched on the lamp next to the TV. It did not turn on.

I checked the cord. My husband peered over the lampshade at the bulb. He gasped. 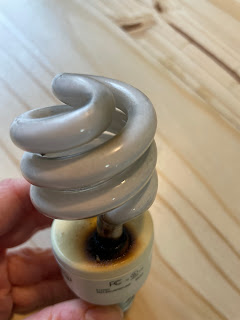 The Case of the Mysterious Smell.