In Praise of "Dark" Literature

I just read two great books. One is an advanced review copy (won’t be out until Sept, so make a note of it) by a first time author. The other is at least the tenth book out by one of my favorite young adult writers, Lauren Myracle. Before I share, I want to get something off my chest, though, that’s been nagging at me. Several weeks ago Meghan Cox Gurdon, a writer for the Wall Street Journal, published a piece called "Darkness Too Visible: Contemporary Fiction for Teens is Rife with Explicit Abuse, Violence and Depravity. Why Is This Considered a Good Idea?"

The gist of the article is that young adult fiction delves into topics no parent in her right mind would want her kid to read about.
It’s true that you can stroll into the young adult fiction section of any bookstore and find an array of “dark” books. (Literally, they are dark. This is one of the results of the Twilight phenomenon. That book had a black cover so many books now have black covers. I heard an art director at a conference call this trend “the wall of black.”) But I digress. As a writer and extensive reader of young adult fiction, I’m here to tell you that there is much more out there than black books and more importantly, there is much more TO those black books than Meghan Cox Gurdon is leading her WSJ readers to believe. I suspect that she was simply trying to be provocative, specifically choosing books that have disturbing premises and using those to make her point. I haven’t read or heard of any of the books she mentioned (gruesome-sounding things that she sums up by saying, do not have happy endings) except one. And that is Lauren Myracle’s new book Shine.
And note, to Meghan Cox Gurdon: It has a happy ending. Shine is one of the best books I’ve read this year. Period. I’ve read nearly all of Lauren Myracle’s books and if you haven’t heard of her, let me give you a quick run down. She’s a rare author who writes both middle grade and young adult fiction. Which is where she may run into trouble. Her books for younger readers—the series beginning with Eleven—is one of the sweetest, most real and honest depictions of preteen life I’ve ever read. If you have a daughter about to start middle school, run out and buy these books, and read them yourself too. You’ll be thrown back to your own middle school years and you’ll have a new understanding of what your daughter will be going through. Bonus: they're funny.
Girls who love the Eleven series, though, may drift over to the YA section and pick up some of Myracle’s books for older teens. Some of these are dark, but not all. A very good one is Peace, Love and Baby Ducks. It's a portrayal of a sister relationship—with all the highs and lows that go along with that. I don’t have a sister, but after reading this book, I knew what it would be like to have one, and it made me envious. It’s meant for older teens though. So there is some drinking (with negative consequences) and complicated, dysfunctional parental interactions and a close encounter with a member of the opposite sex (also with negative consequences, meaning it doesn’t glorify it).
Here’s the thing: I don’t see young middle school girls reading this book (or the other YA books) until they’re emotionally ready to read them. Kids tend to “read up.” They like to try on the next step before they get there. So a ten year old will read books about twelve year olds. A young teen will be drawn to books about older teens. But this is a safe way to explore issues they’re not dealing with yet in real-life. At the same time, I think kids will put a book down or gloss over the stuff that doesn’t make sense to them. You can do that with a book. You can close it. You can drift over passages that bore you or disturb you. My daughter read the Harry Potter books long before she saw the movies and when she did see the movies, there were parts she had to shut her eyes to. Images in movies stay in your head forever. If you really want to get on a high horse about brutality and violence, Meghan Cox Gurdon, turn your sights on movies. (And words of advice for parents who are stressing about what their kids are reading: 1. Your kids ARE READING. Congratulations; pat yourself on the back. 2. Read with them. You might get a nice conversation going. I said this once to someone and she scoffed and said, I don’t have time for that. Well, lady, then your kid’s got bigger problems than what kinds of books she’s reading.)

But I’m digressing again. Gurdon mentions Shine by Lauren Myracle as a perfect example of her thesis about dark literature, and this is where she loses me because I know she didn’t read it. It’s true that it starts out with a disturbing scene. A boy is beaten and left for dead, a victim of a vicious hate crime. The main character, Cat, was once best friends with the boy, and the book is about her attempt to make amends for that loss of friendship by trying to figure out who was responsible for the attack. On a simple level the novel is a detective story. Cat goes around the small, economically depressed town in the North Carolina mountains “interviewing” suspects—who happen to be her friends and former friends. But on a deeper level we’re learning about the complexities in relationships, the reality of small town Southern life, the real and disturbing consequences of prejudice. I closed the book feeling hopeful about humanity and I would not hesitate to give it to my thirteen going on fourteen year old daughter.
Maybe what’s bugging me is the implied disrespect some adults have for teens. That teens can’t “handle” certain topics in literature. That teens will copy or be influenced by what they read. That their fragile innocence will be forever shattered. This reminds me of that proposed Tennessee law that would outlaw teachers saying the word gay. As if not saying something makes it disappear. Teens mock that kind of stuff. They see the inherent hypocrisy and idiocy of it and it makes THEM lose respect for adults. The reality is some kids are dealing with what Gurdon calls “dark” issues and reading about these issues makes them feel less alone in the world. Other kids are fairly sheltered. But here’s a news flash: kids are human. They’re going to die. Some day they’re going to have…gasp….sex (hopefully when they’re married and over thirty but…) Reading young adult fiction is the safest way to delve into these topics and go through stuff without actually going through it. Catharsis, Aristotle called it. Or maybe that was Plato.
Which brings me to my review of The Beginning of After by debut author Jennifer Castle (pub co. Harper Teen; release date Sept, 2011) The main character is a typical suburban teen whose family dies in a car crash. BAM and she enters the world of After. How do you cope when something like this happens? How do people treat you? What does the future hold for you? Now hopefully a typical teen reader doesn’t have to deal with this issue, but I’d bet that many of them in a moment of fury might wish for a split second that their family would disappear. I loved this book because there were no gimmicks. The writing wasn’t purposefully lyrical. It was straightforward, only there to tell the story. The characters weren’t cleverly quirky or wise-cracky. They were complex and normal and real. Every single reaction and interaction the main character has is spot on realistic. There’s nothing didactic or preachy. It’s simply this girl’s story of the year after her family's deaths. By the end you feel like you’ve spent the year with her and wish you could keep following her along. Great book. And I have high hopes that this is the beginning of many more great books for teens by Jennifer Castle.

PS. It has a hopeful ending and the cover is not black. 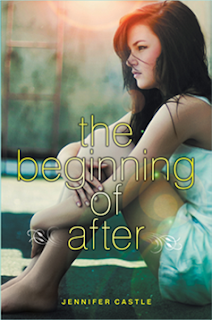 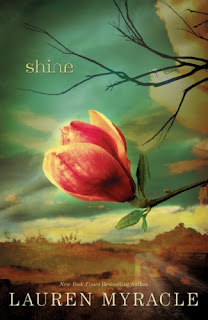 Email ThisBlogThis!Share to TwitterShare to FacebookShare to Pinterest
Labels: Beginning of After, being a teen, books, Jennifer Castle, Lauren Myracle, Shine