Fearing a Zombie Apocalypse? I Have a Solution

I’ve just returned from a marathon college road trip with my son, his best friend, and his best friend’s mother, Lisa. We traversed the state of Pennsylvania, entered the Twilight Zone of freakily designed highways (Route One outside Princeton), and took in the glory of the Hudson River Valley in New York. In the back seat the boys watched every Star Wars movie in random order, while occasionally helping the mothers navigate. (And by navigate I mean we screamed at them and they pecked at smart phone buttons and lazily offered directions.)

Fun quotes from the trip:
“How did people ever get where they were going without smart phones?”
“When I get married my wife better be a cartographer.” (Best friend’s reply: “Yeah, but just because she could make maps, doesn’t mean she could read them.”)
“I don’t really care where Betsy Ross’s house is.”
“That’s no moon. That’s a space station.” Also: “Jar Jar, throw me the Booba!”

Anyway, we had a grand old time despite several moments of mildly shattered illusions.

Mildly shattered illusion numero uno was my long awaited trip through Pennsylvania Dutch Country. A little history: my husband and I have driven route 76 through PA many times, and every time I toy with the idea of swinging down to Lancaster to spy on the Amish. (This wish is tied with my husband’s desire to take an exit off 55 South in Arkansas to eat at a restaurant that touts on its interstate sign that it’s the "Home of The Throwed Rolls." My husband’s heard that you sit at your table and the waitstaff literally throws rolls at you. Whenever we blow by that exit, he sighs and says, “Maybe next time.”) We were making good time on 76 so Lisa agreed to a stop in Amish Country. 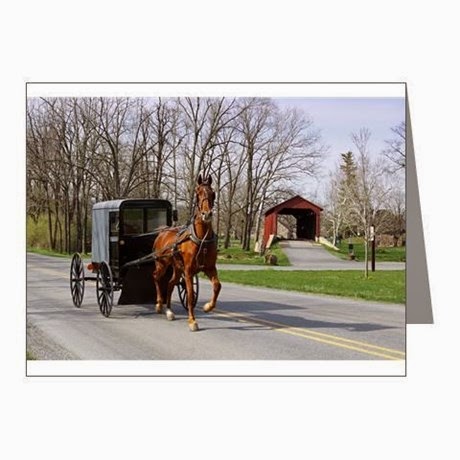 Well. It was just disappointing on so many levels. Sure, there were some quaint farms and the stray horse and buggy. But mostly it was just a string of crappy touristy stores and restaurants. One sold Amish Barbecue. Which we passed on.

Mildly shattered illusion number two was our realization that college tour guides stretch the truth on campus tours. (Okay, sometimes they just make stuff up off the top of their heads.) Our sweet entertaining guide at Princeton pointed at a building where she said Einstein had his lab. She told us it was kept like a room in a museum and we could go up and look at it after the tour. Lisa and I dragged the uninterested boys all over campus later to find the building again.

Three different passersby gave us directions to the room, which we eventually found, locked. Fourth passerby shook her head and said it was a professor’s office. “But it’s supposed to be Einstein’s lab,” I told her. To which she answered: “I don’t know why they tell people that.”

By now you may be wondering what this blog has to do with a zombie apocalypse. All week I was reading the novel Dark Inside by Jeyn Roberts. (Simon Schuster. Release date: Nov, 2011). Young Adult literature is awash lately in post-apocalyptic novels and I have read my fair share of them. The best, imho, is the Hunger Games series by Suzanne Collins. I also liked Forest of Hands and Teeth by Carrie Ryan (The title alone is awesome); Matched by Ally Condie (Just got the ARC of the sequel Crossed and have high hopes for it); and Across the Universe by Beth Revis. These books all have one thing in common: they take place years after some cataclysmic event destroys society as we know it. Dark Inside, however, plops the reader right there, in the moments leading up to and during the cataclysmic event itself. I was at the edge of my seat with this book. It didn’t help that some of the nail-biting action took place on public transportation and I was reading bits of it while shuttling my son around the Philly subway system.

The book is basically a teen version of Stephen King’s The Stand. Multiple characters experience the beginnings of the end of the world and eventually meet up to figure out what to do next. Loved it for its straightforward language, complex character development, and absorbing, suspenseful plot. I’m already eagerly awaiting the sequel.

Every now and then, on walks across bucolic campuses or during traffic jams when the boys were between Star Wars movies, I’d mention something that was going on in my Dark Inside book. So on the way home, when Lisa decided that she needed to redeem the Amish culture in my eyes by taking me through Ohio Amish country, apocalypses seemed to be in the back of everyone’s mind.

We stopped at a store, which she said was where real Amish people shopped. At first the boys didn’t want to get out of the car. (These were the final hours of the marathon trip and they were begging to just get home.) But eventually they turned off their electronic devices and followed us into a 32,000 square-foot wonderland of 19th century necessities. Hand cranked washing machines. Composting toilets. Oil lamps. The boys drank smoothies made by a cheerful, pink-faced Amish girl and plotted out strategies for holing up in this store in case of an Apocalypse.

I am sorry that I cannot share the name, cough, Lehmans, located on 289 Kursen Road, Dalton Ohio, cough cough because, as my son just reminded me when I told him about the subject of this blog: “But then everyone would go there.”

Here's my final word on the matter: print the directions out now. You probably won’t get a good signal from your smart phone when the end of the world begins.
Posted by Jody Casella at 9:33 AM