The Life You Save May Be Your Own

Okay. Let’s say you’ve been writing seriously for six years (and half-seriously for ten more). You set a word count every day, and you hit it. You read books in your spare time (because you love to and not just because it’s market research). You joined your professional organization and attend regional and sometimes national conferences. You’ve studied the business. You send your work out to editors and take their feedback seriously. You snagged an agent, which didn't pan out, and you’re geared up to find new representation. In the meantime you’re keeping a brave face and writing every day. You love writing and you want to continue to write. But some days, you’re discouraged. Beaten down. Weary.

Well, my weary friend, if this is YOU, I think I may have an answer to your troubles.

It’s starts with the zen-like acceptance that writing is what you DO. It’s not about money or fame or published books lined up on the shelves. Even if you have all of that, even if you’re Stephen King or JK Rowling—in the end, it’s just YOU, ALONE, every day, facing the blank blaring page on your computer screen, plugging away as the words alternately roll out or bleed from your fingertips. Accept that fact, and you’re halfway there.

There’s an interesting character in Camus’ existential novel The Plague. If you haven’t read this book, it’s about a town that is quarantined because of a plague. The townspeople are stuck inside the guarded walls, dealing with people dying around them and trying to figure out what to do as they wait to succumb to the plague too. They come to terms with this reality in their own ways. The doctor decides that it is his duty to care for the sick. The priest offers spiritual help. Teachers continue to teach and shopkeepers continue to sell. See, it’s all a big metaphor about life in general. We’re the townspeople, living our lives inside the metaphorical walls of the earth. We’re all eventually going to die so what do we do while we wait? Do we go nuts? Do we hurt others in our fear? Do we kill ourselves under the strain? Or do we simply go about our business, doctoring and preaching and teaching? Or in the case of my favorite character, a guy named Grand, do we write?

Grand seems like he’s been plopped into the narrative to provide comic relief. He enters the scene every once in a while, consumed with a novel he is writing. The other characters treat him with amusement, asking him politely how his book is progressing. The funny part is that Grand doesn’t seem to be able to get past the first sentence. “One fine morning in the month of May an elegant young horsewoman might have been seen riding a handsome sorrel mare along the flowery avenues of the Bois de Boulogne.” Each time we meet him he’s changed a word. Should it be the month of May or June? Should the horsewoman be elegant? Should the flowers bestrewn? He keeps working on the sentence. His dream is to finish the entire novel. He imagines that when he finally does, all the gentlemen will praise him and cry “Hats off!”

But at the end of The Plague he is still fiddling around with the sentence. He’s probably never going to finish the novel. No gentlemen are ever going to cheer “Hats off!” and yet Grand is strangely content. He’s decided to cut out all of the adjectives and he’s eager to rush home and get to work. It’s what he does. It’s how he spends his life. I don’t know what Camus meant exactly with his construction of Grand. I suppose you could see the guy as deluded and silly. A perfectionist who will never move onto Sentence Two. A person who could do so many more important things with his time on this earth. But Camus was a writer, in addition to being an existentialist philosopher, and so I would like to believe that he sympathizes with Grand. Not everyone is a doctor or teacher. Some of us happen to enjoy fiddling around with words. And if we can amuse other people in the process, all the better.

Other writers have made their peace with writing for the sake of writing. Emily Dickinson wrote the majority of her poems alone in her attic room. Only a handful were ever published when she was alive and those were edited heavily and published anonymously. “This is my letter to the World/That never wrote to Me—” is the beginning of one of her one thousand seven hundred seventy five poems. Herman Melville toiled alone too. He had achieved success with several of his earlier books, but his masterpiece Moby Dick was ignored. He said he didn’t care. He wrote to Nathaniel Hawthorne (to whom he dedicated the novel) “For not one man in five cycles, who is wise, will expect appreciative recognition from his fellows, or any one of them.”

Now, I know what you’re thinking. You’re NOT Emily Dickinson or Herman Melville. They were brilliant writers, who tragically were not recognized as such while they were alive, but their words and ideas will live on as long as there are people to read them.

Here’s the sticking point of the zen-like acceptance theory: It works only partly. It may keep you writing every day, but you're not going to feel very good about it when you suspect that people won't read that writing. Writers and readers, we need each other. Don’t let Emily Dickinson’s hermit-like status in her garret bedroom fool you. She wrote tons of letters and many of her letters were poems. There were a few people out there in the world, people she cared about, who read her work and supported what she was doing. Melville, too. In that same letter to Hawthorne where he said he didn’t care if people liked his book or not, he said he hopedHawthorne would like it.

I understand, weary writer. I truly do. You don’t want money or fame. You only want to be published so you can have readers, others out there who’ll get what you’re writing, who’ll getyou. Every one of us has a story to tell. And every one of us wants to be listened to and understood. Some of us just happen to be little more obsessive about getting that story onto the page.

This seems like a digression, but bear with me. I read a great book yesterday by Sara Zarr, How To Save a Life. (pub Little Brown, Jan. 2012) The narrative goes back and forth between two girls, who on the surface couldn’t be more different. Jill, still reeling from the loss of her father the year before, is lashing out at everyone, particularly her mother, who has made some questionable decisions lately. And Mandy, who is pregnant and has come to live with Jill after Jill’s mother promises to adopt Mandy’s baby. The book seems like it might tread into predictable territory—two girls realize they have more common, etc. But it doesn’t. There’s a real tension here. It doesn’t come from outside, where the reader wonders what’s going to happen to the characters. It comes from the characters themselves. What are they going to do to mess things up? I stayed up late reading, worrying over these girls as if they were my friends.

I loved this book. I’ve read all of Sara Zarr’s books and loved them too. They’re filled with flawed, vulnerable, yet still somehow hopeful/doing-the-best-they-can people. I imagine Zarr writing them somewhere alone—in a nicely appointed office or maybe at a local coffee shop—just her and her lap top. All the while she’s doubting. She’s wondering if what’s she doing is silly and pointless and stupid. When she reaches the final page of her manuscript, she’s fighting off tears and grinning like a fool. Okay, maybe she did win the National Book Award for one of her previous books, but this new one, How to Save A Life, which isn’t even out yet officially, is still untested.

I’d like to put her mind at ease. Hats off, Sara. It’s good. Thank you for writing it. You’re right. Sometimes we save our own lives by saving others.

Weary writer, THIS is why you write. You only need to connect with one other person to make it all worthwhile.

PS. Yesterday you came across a witty tweet: THE ONLY WRITING ADVICE YOU REALLY NEED. And when you clicked on the link it said:
Keep Writing.

Haha. But you knew that already. Now go do it. 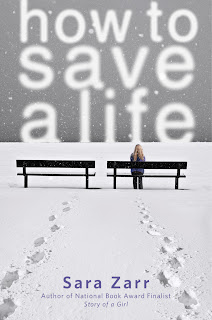 Email ThisBlogThis!Share to TwitterShare to FacebookShare to Pinterest
Labels: Camus' The Plague, Emily Dickinson, Herman Melville, How to Save a Life, pursuing a dream, Sara Zarr, self-doubt