I’ve always hated writing pitches. For the uninitiated, a pitch is a brief description of a manuscript written to grab the attention of an editor or agent. Hook someone with the perfect pitch and you’ve elevated yourself out of the bottomless slush pile and into the glorious realm of the solicited. If you can write a snappy pitch, the first door on the long road to publication opens. Someone wants to read what you’ve written.

For most of my writing career (and I use the word career here in the loosest sense) I took what I like to call the Field of Dreams approach to submitting my work. Do you remember in that movie how the Kevin Costner character constructed a baseball field in his cornfield and there was that God-like voice intoning IF YOU BUILD IT THEY WILL COME? In other words, carve out a cool baseball field in the boonies of Iowa or Nebraska or wherever the heck Kevin lived, and people will just intuitively sense that it’s there, drop everything they’re doing, pile their families into their cars, and drive out to watch a ball game. (Hey. It could happen.) Whenever I had what I believed was a cool finished novel, I’d do the Field of Dreams thing, and send it out into the publishing world attached to something along the lines of this:

Dear Editor,
Enclosed please find my book. Thank you for reading it.

Wow. I know. Talk about attention grabbers. I was so adorably hopeful back then. I honestly thought that editors, like nostalgic baseball fans, could somehow feel the cosmic shift in the Creative Universe when they opened my submission. Oddly, sometimes the strategy worked and I did get a few kind editors to read and even occasionally send me encouraging feedback.

But I don’t recommend going this route. If you’re serious about traditional publishing, you’re eventually going to have to buckle down and write a pitch. I wish I could give you some helpful advice. Sadly, there’s a very big part of me that is still standing in the cornfield turned baseball diamond hoping the editors will magically appear. I have a block when it comes to writing pitches. It’s weird. I’m a writer, so theoretically I should have the skills. I write reviews of other people’s books. You’d think I’d be able to write about my own.

Maybe part of my problem is that I’ve heard so much conflicting advice over the years about what editors/agents want in a pitch.

1. Write it like it’s the inside flap of a book, I heard an editor say once.
2. Whatever you do, don’t write it like the inside flap of a book, said someone else.
3. Write in the same voice of the book to give the editor a sense of your writing style
4. Keep a professional tone. Don’t be clever and try to write it like one of the characters
5. Make it a mash up. Charlotte’s Web meets Twilight set at a school like Hogwarts, for example
6. Stay away from comparisons. Your book is not like a classic. So just get over yourself

You get the point. Apparently, editors and agents expect different things from a pitch. So you’re going to have to do your homework and check out their guidelines and follow them to the letter. There are a few hard and fast rules that I will share with you. If you send your pitch the old fashioned way (in the mail), for God’s sake, don’t include cutesy stuff like rainbow stickers or scented paper or glitter. My friend Deb would disagree with me heartily, but there is NOTHING more annoying than an explosion of glitter on your desktop. If you’re on Twitter, don’t do what this poor deluded sap did recently—he mass tweeted a bunch of editors and agents with what basically amounted to a link to his book and a demand that they read it. Yikes. I can’t imagine that obnoxious tactic led to many takers. One editor even tweet-berated him for all to see.

Not to lapse into a previous blog, but one of the great perks of having an agent was I could merrily avoid writing a pitch. SHE wrote it for me and when editors passed on looking at my book, I had the nice smug feeling that what they were rejecting was actually my agent’s take on the book and not anything related to me. But enough self-pity. The reality is that I’m back to square one (or to keep my lame baseball metaphor going, first base) and I need to buck up and do the work myself. Not only to snag an editor's attention, but to keep it.

Here’s something I learned from reviewing ARCs (advanced review copies of books). Every so often, they’re so far in advance that they don’t have an inside flap or a blurb written on the back. A reader picks the book up and has no idea what it is. Is this meant for middle schoolers or young adults? Is it a romance or a mystery or a heart-wrenching drama? She's opening the book blindly with no idea what’s inside, and the truth is, that makes it difficult to start reading. It would be helpful if there were some kind of hook--a smidgen of a description of what’s inside to whet her interest--a pitch.

Otherwise she might stay on the sidelines of that cornfield forever, with no idea that there’s this really awesome baseball diamond right on the other side of the cornstalks. 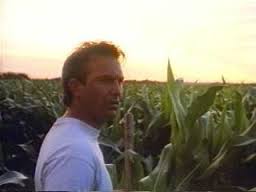 Email ThisBlogThis!Share to TwitterShare to FacebookShare to Pinterest
Labels: pursuing a dream, queries