I am not a horse person. I know many people are. There’s a whole genre of horse-related books that I’ve never read. The only one I can think of off the top of my head is Black Beauty. I didn’t read that one either.

So I really had no desire to read the book The Scorpio Races by Maggie Stiefvater. Something about the cover. I hate to say I judge a book by one, but it’s true. The picture on the front didn’t grab me. It’s a girl riding on a horse, in kind of a cartoon-like style. In addition to not being a horse person, I’m not an artistic person. I don’t pretend to know what goes into the design of a book cover. I just know what appeals to me and what doesn’t. This one fell into the second category. I was sitting at one of my favorite places in the world, Cover to Cover, a children’s bookstore in Columbus, and I had an array of new books to choose from, advanced review copies piled in front of me. I kept passing by the horse one, picking it up and putting it back down. In the end the only thing that made me hold onto it was the author’s name. Stiefvater wrote the novel Shiver about a girl who loves a wolf (really a beautiful boy named Sam) that lives in the woods behind her house. That was a good book so finally I took this new one. And, out of some sense of obligation to read it before it comes out officially on October 18, I opened it.

To say that I loved this book is a gross understatement. I spent an afternoon reading it when I should’ve been working on a revision. I am knee deep in major revision of a novel, a novel that for the first time in my life I think might possibly, dare I say it?—be published. (Maybe I shouldn’t have said this. "Scratch that," as Willy Wonka would say. "Reverse it.") Anyway, the last thing I needed to be doing today was curling up with a book.

But I am so glad I did. It reminded what I love about reading and books and children’s books andreading children’s books, and all of that draws me back to my own childhood when one of the only things that kept me going sometimes was the ability to escape into the world of a book.

The Scorpio Races is exactly the type of story I would’ve loved to fall into as a child. Even though, as I said, it’s filled with horses. These aren’t ordinary horses, though. Did I mention that? They’re killer ones based on an ancient myth of horse monsters that swim in the sea and rise up out of the waves to gallop on the shore. And occasionally eat people. The island where they roam builds an entire culture around these horses--catching them, riding them, racing them. The two main characters, a boy named Sean and a girl named Puck, have their own complicated relationship with the horses and eventually with each other. Sean is something of a horse whisperer. He’s a trainer and four time-race winner but he dreams of getting out from under the thumb of the owner, tired of propping up the owner’s worthless son. If Sean wins the next Scorpio race (which involves riding a horse on the beach between the cliffs and the sea while praying that you don’t get eaten or dragged into the water) maybe he can buy his beloved horse and gain his freedom. Puck’s got more serious problems. Her parents are dead (courtesy of, you guessed it, a horse), her older brother’s about to abandon her and her younger brother, and their cottage is about to be repossessed by Sean’s boss. If she rides in the big race (something a girl has never done before) she might win enough money to save her family from ruin.

I am not doing this book justice. The gorgeous language. The description of the sea and the beach and the strange people that inhabit the island. I don’t know where the novel takes place, or when. It doesn’t matter. It’s another world, a place you wish you could drop into and stay.

I don’t think there will be a sequel, something that surprises me (because sequels are so obligatory lately) and it makes me sad. I reached the last page and I wanted the story to keep going. Which reminds me of another favorite pastime I had as a child—rereading my favorite books so I could escape into them again.
It’s something I will certainly do with this one. 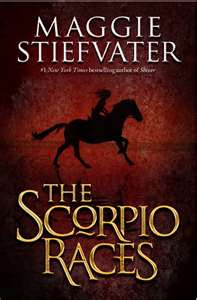