I can’t remember where I read this or how it was worded exactly, but the sentiment struck me and has stayed with me ever since: If there were no bad childhoods, there would be no such thing as children’s literature. A writer, especially one that’s got a few relentless demons in the old childhood closet—in the form of vicious bullies, abusive and/or neglectful parents, or simply a nice stretch of angsty lonesome gawky puberty-infused years—can create some rich and interesting fiction.

I’ve read YA books where you can practically feel a raw wound throbbing beneath the surface. Take a modern classic like Sara Zarr’s novel Story of Girl, which centers on a girl who may or may not have earned her bad reputation. Apparently a year earlier she had dated an older boy and he “kissed and told.” Now there doesn’t seem to be anything she can do to change everyone's negative perception. More disturbing is the girl’s relationship with her father, who appears to be judging her too. I’m not saying that Zarr herself experienced this exact situation, but the pain the character endures—her shame and confusion and guilt—that’s the Truth with a capital T.

Why do I get the feeling that Laurie Halse Anderson (Prom) understands what it’s like to grow up in a struggling blue-collar family? Or that John Green (Looking for Alaska; Papertowns) once had his heart broken by a bewitching and beautiful girl? Or that the author of the debut novel The Girls of No Return, Erin Saldin, really knows the internal turmoil of a troubled teen?

I just read this book and it was absorbing and horrifying. The main character, Lida, is bitter when her father and stepmother send her away to a reform school/wilderness camp. There, she befriends Boone, who seems like the obvious antagonist in the story, a bully who takes it upon herself to “welcome” the new campers, and Gia, a magnetic girl, who at first glance doesn’t seem to belong in a school for troubled kids. Read along, though, and you’ll be anxiously rooting for Lida to figure out who the real enemy is here. 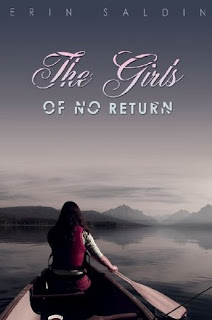 This book is a step up from a page-turner, a female riff on the themes of A Separate Peace. Sometimes it crosses the line into over-moralizing, but I can forgive that because the book has a palpable heart at its core, and that core is something I bet Saldin knows intimately—what it feels like to be an outcast, and the sickening sense of shame you get when you’ve done something terrible that you can't ever take back.
Let me repeat that I am not suggesting this novel (or the others mentioned) are autobiographical. There is a difference between telling the truth and conveying what is true. The most successful writers are able to tap into the murky pools of their pasts and translate those complex and universal feelings onto the page.

I heard an interview with Alice Walker once on NPR. She was talking about why she became a writer, and she said that she could trace it back to her eighth year. There is something about this age, 7 or 8 or so, she explained. It’s around the time when a child is first going out of the home and slowly becoming aware that there are other ways to live. You go to school and meet many other children. You notice that other families are different from yours. You start to look at yourself and your own world and compare. It is then that many kids make a subconscious (or not so subconscious) effort to fit in, to be like everyone else.

But what if something traumatic happens at this time in your life, something that makes you painfully aware that things—that you—are different? These hurting children may spend more time alone. They might turn to books for escape. They become more self-reflective. In other words, they’re potentially training to be writers. Here’s a funny thing: I can’t remember what it was that happened to little Alice Walker. I’m sure she mentioned her traumatic event in this interview, but all I was thinking about was the year I was seven. It was the year my father died. Which set in motion other events, like a string of dysfunctional dominoes knocking one onto the next.

When I was in college, taking writing classes, my first stories were thinly veiled autobiographical pieces. I was writing what I knew, as the writing teachers like to say we should. But really, what I was doing was more like psychotherapy. I remember sitting with a professor in his office as he scanned one of my embarrassingly painful, bared-heart-on-a-page vignettes. God knows what the poor man was thinking. (Actually, I can guess. Something along the lines of, this girl needs professional help.) Instead, we both pretended this story was just a story, and he said, “here’s something you can try. Write it again in third person. It might give you a little…uh…distance.”

I did. And it worked. A raw wound grew into a story with something real and moving at its center.
We all have scars. Some of us, though, seem to have collected a few more along the way, or we have a harder time letting go of them. Some of us figured out what I did in college: there was a wealth of material there if I was courageous enough to explore it, and if I was clever enough to manipulate what I needed. Then the trick is to let go of the "facts" and write.
Posted by Jody Casella at 12:59 PM

Email ThisBlogThis!Share to TwitterShare to FacebookShare to Pinterest
Labels: being a teen, Erin Saldin, Girls of No Return, Sara Zarr, Story of a Girl