I love page turners—breathless, heart-pounding, cliff-hanging books—where the minute I start reading them I know I’m going to have to clear out my whole schedule because there’s no way I’m stopping to cook dinner or have a conversation or go to bed at a decent hour. Reading a page turner is like riding an amusement park ride or watching an over-the-top action-adventure movie. It’s fun and fast paced but it makes you a little dizzy. Sometimes I get near the end of one and I feel like a demonstrator in those speed-reading courses they used to advertise on TV—you know with the finger zipping over the words and the pages flipping so quickly all you can see are the blurred lines. With a good page turner, you’re not reading so much as scanning, your only object to see what’s going to happen next. If you miss a few details along the way—a clever turn of phrase or a vivid bit of sensory description, who cares?

I’ve picked up and torn through my fair share of page turners: The Firm and The DaVinci Code and Jurassic Park. Also, solid YA bestsellers like The Vampire Academy books and Twilight and my recent favorite, Ashes by Ilsa Bick. As a writer I marvel at how these riveting and entertaining novels are put together. I think it has something to do with introducing a sympathetic, somewhat flawed hero and hurling a bunch of problems at him. I heard former Philomel editor Patti Gauch talk about this at a conference. She said to imagine your character is a stool with four legs, and as you write, you keep kicking out a leg until there’s only one leg left. That’s when the reader is thinking: there is no way anything else can happen to this guy.

And that’s when the writer kicks out the final leg.

Her talk wasn’t about page turners, though. Her emphasis was really on the hero, the sympathetic, flawed character part of the equation. And page turners, stereotypically, are more about the plot—what’s happening to that poor beaten down fellow. If we care about that guy, we’ll follow him anywhere.
Even, interestingly enough, through a book that’s not a page turner. I don’t know if there’s an official term for this type of book, so I’m going to call it a slow builder. I love slow builders just as much as I love page turners. Maybe more.

I read two recently, the beginning of a historical fiction series, A Brief History of Montmaray and The FitzOsbornes in Exile by Michelle Cooper. Maybe it's not historical fiction. It’s set in the late 1930’s as Europe is slowly and inevitably lurching toward war. But there’s a fantasy element to the books because the characters are the last surviving members of a fictional royal family living alone in their crumbling castle on a made up island called Montmaray. There’s a crazy king and a missing queen, a carefree prince, a brilliant bookish princess, another princess who wishes she were a boy, and Sophie the narrator, who records their adventures, which range from interactions with the handful of remaining villagers to a shocking visit by the Nazis. It wasn't the adventures that drew me into these books. 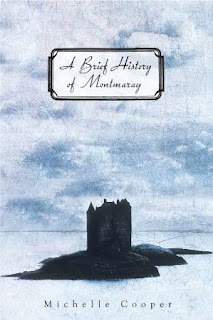 Like most slow-builders, they start with a fresh voice, something funny and quirky, something I haven’t heard before, almost like the narrator is a cool new person I’ve just met but I suspect she will soon be a good friend. The characters are likable, of course, but maybe they’re a little annoying too (like people we know in real life). And the world they live in may be like ours, or it could be a place that we’ve never heard of, but somehow everything about it is familiar and real. Here’s the potential problem with a slow builder—it takes a bit work on the part of the reader—a bit of patience. And when we’re talking about younger readers, that may be asking a lot.

Something they like to do at children’s writer conferences is have would-be writers submit first pages of novels, then an editor or agent will sit on the stage and read the randomly selected pages out loud, giving the writers in the audience a first impression. It’s kind of an excruciating exercise to witness—whether your page is selected or not. So much of what your novel is has to be there on that first page—the voice, the tone, most likely the main character, and at least a hint of the conflict. Tell too much and you risk sounding like you’re summarizing the back cover. Tell too little and it’s a confusing mess. Beginners seldom get it right. And you can hear them grumbling under their breaths. A brave soul will come right out and say it—something along the lines of, is it fair that an editor will only read my first page? The implication is that the other pages are much better once the story gets going, etc.

Here is what an editor once said to that: “Well, I might read more than a first page, but a kid wouldn’t. A kid might not read past the first line.”

This is true. And anyone who dreams of writing for children is just going to have to accept it. Still, I do hope there are a few patient and kind young readers around who will give a slow builder a chance. Because here’s what always bugged me about that speed-reading course: it assumes that the only point of reading is to accumulate large chunks of info. Forget savoring or digesting or ruminating. With good slow builders, like the Montmaray books, you don’t want to scan, you want to take your time. When the end nears and you feel it building toward the climax, you’re often surprised to discover that you’ve been reading a page turner after all, but it’s one that’s much more intense and exciting because you've been so immersed in the journey along the way.
Posted by Jody Casella at 5:14 PM