On this glorious, bizarrely sunny and 80 degree day in Columbus, I find myself smack dab in the middle of yet another first draft (ten. But who’s counting). So right on schedule I’ve got the usual negative thoughts burbling up. This sucks, who am I kidding? Why am I wasting my time with something that inevitably will never see the light of day? Blah blah blah. It’s kind of sad. Because when I started this first draft, I had such high hopes for it:
1. The idea is the best one I’ve ever had.
2. This book will be THE ONE.
3. I can’t wait to get going on it first thing in the morning. Etc. Etc. (Warning: if you DON’T have these feelings upon beginning a first draft, you may want to reconsider the project. Later, when that excitement has faded, you’ll need every little nibbly remnant to keep you going.)

Another thing that keeps me going is setting a word count. For this draft I’m taking a page from Stephen King and writing 2000 words a day. And every day I meet the goal. I am not saying these are GOOD words. First Draft Land is all about the quantity, people. It’s not magic. It’s not a secret. To write a book you have to sit down and um, write it.

My friends tell me I must have a lot of self-discipline. Maybe. But I think it might have more to do with the stubborn/OCD combo streak that I’m blessed and/or cursed with. I have the hardest time quitting something. And I rarely fail to follow through on something I said I would do. Hence, if I say I’m going to write 2000 words today, then damn it, I’m writing 2000 freaking words. This is not to say that it is easy. But what is?

The truth is, anyone who can read can write a book. Just like anyone who has two legs can run a marathon. It has to be something you really want to do, and you’re going to have to make some time to run every day. Full disclosure: I have never run a marathon. But I have run some 5Ks and they’re hard enough. Two minutes in, usually, I want to die and I’m cursing myself for signing up. What the hell was I thinking? Why did I think I could do this? Still, I keep moving my feet, slapping them down again and again, breathing in and breathing out. I start making little bets with myself: Just get to the lightpost. Don’t stop til you pass the pine tree. I can do anything for thirty minutes, right? And lo and behold, it’s true. I’m not trying to win the race, mind you. I’m not even trying to get an impressive time. I’m just trying to run at a steady clip until I cross the finish line.

If there is a secret to writing a first draft, this is it. At least for me. Another full disclosure: I do not outline a book before I start. Instead, I have an idea or two—a character, a line that gives me the narrator's voice—and I start writing. I set my words. I go. I resist the urge to fiddle and revise along the way. That’s the key.

Stephen King, in his book on writing, entitled, shockingly, On Writing, compares writing a book to digging up a fossil. The first go around, he says, you’re just trying to dig the thing out, as many of the pieces as you can without breaking any, without missing any big important chunks. You certainly don’t stop halfway through and start dusting the bones off and snapping them together. That’s for later—when it’s all laid out in front of you and you can see what you have. Only then do you arrange. See what’s missing. Throw out the bits of rock that you thought were bone. Or maybe those things belong in some other fossil instead of this one.

Looking at it this way, it’s easy to write a book. Just pick up your shovel every day and keep digging. 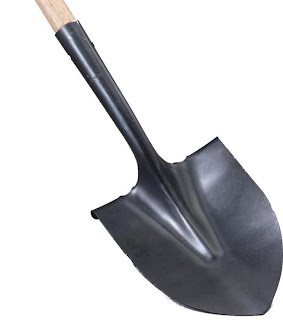 (The secret to writing a book)

Email ThisBlogThis!Share to TwitterShare to FacebookShare to Pinterest
Labels: middle of a book, On Writing, Stephen King, Writing process